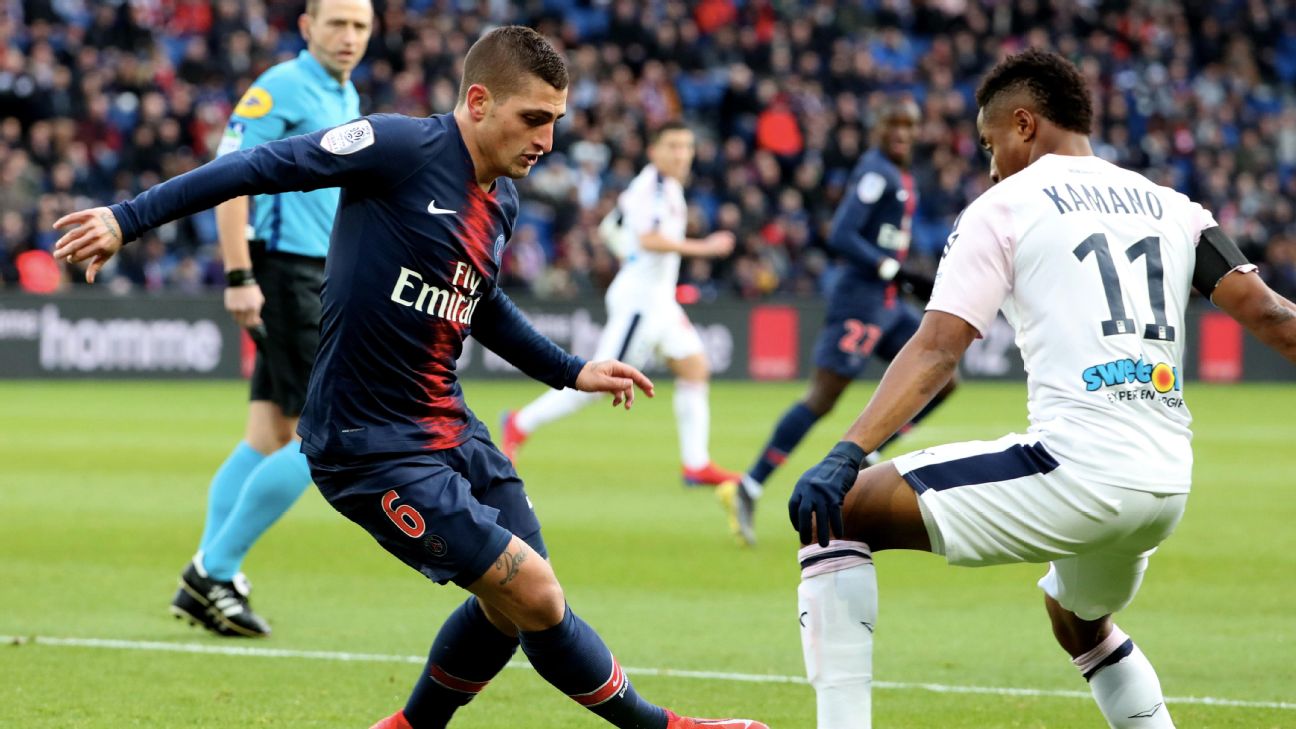 Paris Saint-Germain opened up a provisional 13-point lead over Lille at the top of the Ligue 1 table with a 1-0 win over Bordeaux, but it came at a cost as goal scorer Edinson Cavani hobbled off at the end of the first half at Parc des Princes on Saturday — days before the first leg of the Champions League last 16 clash away at Manchester United.

Aside from the win, there were no major plus points — aside from Marco Verratti playing an hour on his return from injury. It was another brittle display, and perhaps the most pleasing thing for coach Thomas Tuchel after 90 minutes was reaching the final whistle with only Cavani and Thomas Meunier suffering knocks.

Losing Cavani for Manchester would be a massive blow, so the extent of the Uruguay international’s injury must be identified immediately. Meunier must also be assessed after a heavy second-half collision with Francois Kamano resulted in him being substituted.

Otherwise, Eric Maxim Choupo-Moting continues to show his limits in PSG colours and a number of fringe players failed to embrace a rare chance to impress.

6 — Tuchel went with a logical starting XI and blended fringe players with established starters, while he also handed breathers to those most in need by only naming six substitutes, but he will be more worried about Cavani and Meunier’s statuses rather than the laboured nature of the win.

GK Gianluigi Buffon, 6 — Solid and reliable between the sticks, he still had to make one or two impressive saves at key moments to earn PSG’s clean sheet.

DF Thomas Meunier, 6 — A decent enough outing, but it was overshadowed by a hefty knock when he collided with Bordeaux’s Kamano in the second half and was ultimately forced off — another pre-Manchester worry. He won the penalty, which Cavani scored, for the only goal of the game.

DF Thiago Silva (c), 6 — It was not his most commanding performance as he was booked and took a late knock, but he did not have to be in monster mode as Les Girondins’ finishing was mostly poor.

DF Presnel Kimpembe, 7 — Paired reasonably well with Silva and was the most senior youth academy graduate on the pitch on a day when Tuchel put a great deal of trust in PSG’s youth.

DF Stanley N’Soki, 5 — Saw yellow in the first half, which could easily have been red, and struggled over the 90 minutes.

MF Christopher Nkunku, 4 — Another disappointing display just days after underwhelming against third tier Villefranche Beaujolais in the Coupe de France — he needs to make more of these sorts of opportunities.

MF Dani Alves, 6 — A decent enough display in the middle, although it continues to be a difficult position for him to master.

MF Marco Verratti, 7 — Getting an hour under his belt was the low-key highlight of the afternoon for PSG — he is now in contention to start in Manchester next week.

MF Moussa Diaby, 4 — A second half booking compounded a frustrating outing, which added further evidence to the feeling that he is not yet mentally ready to be a regular starter.

FW Eric Maxim Choupo-Moting, 3 — Calamitous. As limited as he is, there are still some mistakes that he should not be making and the regular booing from the Parc des Princes crowd will have done little to boost his flagging confidence.

FW Edinson Cavani, 6 — Scored the winning goal from a penalty just before half-time and could have had another if his finishing had been sharper, but his exit through injury just before the break has PSG sweating on his fitness ahead of United next week.

FW Kylian Mbappe, 5 — Replaced Cavani for the second half and was not at his best with familiar issues in front of goal because of a lack of concentration.

MF Leandro Paredes, 6 — Came on for Verratti after an hour and although Tuchel probably wanted to pair him with the Italian for a short period, the German will be delighted that both midfielders made it through unscathed.

DF Colin Dagba, NR — Meunier made way for him late on with a head problem, so it was just a question of keeping things tight with the score poised at 1-0.