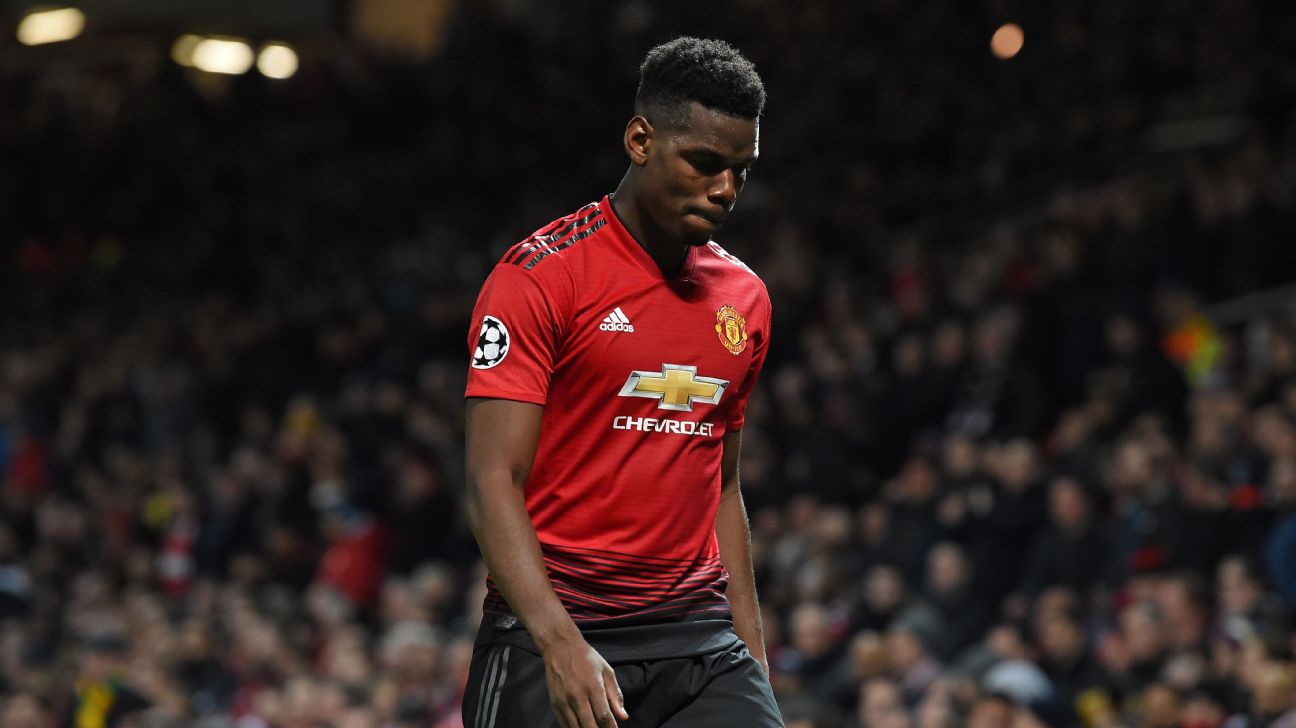 Just when you thought you were out of rumours about Paul Pogba leaving Manchester United, they drag you back in.

One might have thought that an upturn in form, coupled with Jose Mourinho’s departure and Ole Gunnar Solskjaer’s arrival, would lead to Pogba finally being happy in Manchester.

Not so, says AS, which makes the massive claim that the France midfielder wants to leave in the summer after three seasons at Old Trafford.

AS reports that “his agent, Mino Raiola, a specialist in hard bargaining, is already working on finding his client a new club.” And, of course, Real Madrid and Juventus are ahead of the chasing pack.

Real would appear to be Pogba’s first choice, given his recent comments, but Juve are working out how they can afford to bring him back. Welcome to the saga of the summer, folks.

23.01 GMT: That’s going to bring Monday’s live edition of Transfer Talk to a close. Thanks very much for joining us, and be sure to check back very soon when we return with all the latest gossip pulled from Tuesday’s back pages.

22.26 GMT: Ander Herrera “is very close to becoming a PSG player,” according to AS, who reports that the Manchester United midfielder is on the verge of moving to Parc des Princes on a three-year deal this summer as a free agent after Les Parisiens trumped United’s contract of €112,000 a week by offering €170,000 a week.

20.49 GMT: With Ajax reportedly demanding the same €85m Barcelona paid for Frenkie de Jong in order to part with Matthijs de Ligt, the Catalans will need to raise funds if they’re to add the 19-year-old centre-back to their ranks, and the Mail reports that they’re willing to offload Samuel Umtiti this summer in order to do it — and that Manchester United are scouting the France international centre-back tonight as Les Bleus take on Iceland.

19.12 GMT: Barcelona are not planning to offer midfielder Ivan Rakitic an improved contract and even though the club do not want to sell him this summer, they may end up doing so, sources have told ESPN FC.

17.35 GMT: AS reports that Real Madrid are interested in Juventus midfielder Miralem Pjanic, who’s set to have a sit-down with the Bianconeri at the end of the season to discuss his future, despite just signing a new deal last summer. Should the 28-year-old push for an exit, Madrid would be faced with an €80m price tag for the Bosnia & Herzegovina international.

15.58 GMT: To the south coast now, where the Bournemouth Echo says a report suggesting that Bournemouth, along with West Ham, are interested in Aston Villa midfielder Jack Grealish “is understood to be untrue.” Grealish was heavily linked with Spurs last summer.

15.33 GMT: Reports in Italy suggest Spurs could be looking at Lazio’s Albania international keeper Thomas Strakosha, who would be likely to cost them more than £30m.

14.57 GMT: Chelsea defender Andreas Christensen has said he has been told the club will not be selling players as they appeal against the transfer ban imposed by FIFA after they were found guilty of breaching rules on overseas players under the age of 18.

“The messages we’ve got are that Chelsea can’t appeal the case and therefore want to keep all the players,” Christensen told Danish newspaper Ekstra Bladet. “The situation I have ended up in has been very difficult to accept.”

14.31 GMT: Manchester United midfielder Ander Herrera has said his future is out of his hands amid links with a move to PSG.

“It is logical [PSG interest and a possible United exit] when you are into your final three months of contract,” he told El Periodico. “I knew that something would come out.

“I am handling it normally and concentrating on playing football between now and the end of the season. I am leaving the rest to my agent — both discussions with United over a contract extension and talks with other clubs over a potential move.”

13.47 GMT: PSG star Neymar may have been linked with Real Madrid or a return to Barcelona, but he is in talks about a new deal, his father has told UOL.

“Neymar is in the second year of his contract, so he has three more to run. We are already discussing an extension with PSG,” Neymar Snr said. “The probability that he does not leave is great.”

So maybe Bayern Munich’s Uli Hoeness was right when he said: “I would pay €100m for Kylian Mbappe, but for that I would only get his left tibia.”

13.07 GMT: Eden Hazard is not the only Chelsea player to be linked with a move to Real Madrid, with reports suggesting that midfielder N’Golo Kante is also a target for Zinedine Zidane. But the London Evening Standard reports Kante as saying: “I am at Chelsea, and I still have aims here — what is said elsewhere is not important.”

12.44 GMT: As Brendan Rodgers prepares for his first transfer window in charge of Leicester, the city’s Mercury newspaper reports that Getafe defender Djene Dakonam is among his potential targets. It says the Foxes would have to pay £30m to trigger his release clause.

12.17 GMT: Bayern Munich full-back Rafinha has dismissed reports that he has agreed terms with Flamengo Rio de Janeiro, saying on Instagram that he will only announce his next move once his Bayern contract has expired in the summer.

11.48 GMT: France striker Olivier Giroud has told Telefoot he doesn’t believe this season will be his last at Chelsea, but said he wants more playing time and going back to Ligue 1 is “a possibility,” with Lyon his club of choice.

11.25 GMT: Arsenal are reported to be interested in Charlton midfielder Joe Aribo, but Football London says the League One playoff contenders remain hopeful that he could yet agree a new contract.

11.02 GMT: L’Equipe claims PSV’s 17-year-old Belgian sensation Heritier Deyonge could join Lyon rather than PSG. The full-back has impressed at youth level and is expected to make the step up this summer.

10.35 GMT: Benfica want to increase the release clause in Joao Felix’s contract in order to fend off interest from a number of clubs, president Luis Filipe Vieira has said.

Felix, who has been compared to Cristiano Ronaldo, was promoted to Benfica’s first team in the summer and has been linked with Manchester United, Juventus, Barcelona and Real Madrid.

“Right now we are not interested in selling Joao Felix, and soon we will increase his release clause,” Vieira told Tuttosport. “He is one of the best products to have emerged from Portuguese football since Cristiano Ronaldo.”

10.07 GMT: Barcelona are optimistic that they will win the race to sign Ajax defender Matthijs de Ligt this summer, sources close to the club have told ESPN FC, and Sport claims they have a plan to tempt the Dutch club into a sale.

Barca are reportedly willing to loan 19-year-old French defender Jean-Clair Todibo next season as part of a €60m offer that would see De Ligt arrive.

09.50 GMT: Paul Pogba may be taking the headlines but Marca reckons Zinedine Zidane has another No. 1 target in mind: Liverpool forward Sadio Mane.

The report mentions a fee of €85m but, given that Philippe Coutinho cost €160m when he was sold to Barcelona, they might want to consider saving up a bit more cash.

09.25 GMT: A Bola reports that Benfica are interested in Inter Milan defender Joao Miranda. The Brazilian has not signed a contract extension with Inter and becomes a free agent in the summer.

Benfica have reportedly joined the race to sign the 34-year-old, also a reported target for Monaco. But A Bola says, Miranda wants to continue to play in Europe for a few more years before returning to Brazil to play for Flamengo.

09.12 GMT: PSG are still looking for a few new faces and Il Mattino reckons Napoli’s Allan, who would cost around €75m, remains a target.

08.40 GMT: Confronted with a report in the Sun which said Jadon Sancho‘s agent, Emeka Obasi, had met Manchester United representatives, Dortmund sporting director Michael Zorc told Bild: “I have no knowledge of that. And it’s not relevant.”

Dortmund’s stance has been they won’t sell Sancho this summer, but an offer in the €130m region could break their resistance.

In a setback to Jurgen Klopp’s plans, the Mirror reports that returning Real Madrid boss Zinedine Zidane appears to have squashed any chance of Liverpool — or anyone else — signing midfielder Marco Asensio.

Asensio had been out of form under previous Madrid bosses Julen Lopetegui and Santiago Solari, with the club seeming keen to offload the 23-year-old, but Zidane appears to get the best out of him and has said he sees him as “fundamental to the team.”

Asensio won two Champions League trophies under Zidane and played the full 90 minutes of the second game of the coach’s return against Celta Vigo.

Ajax defender Matthijs de Ligt has been linked with top clubs on an almost daily basis, and now it looks as though his future is closer to being concluded.

Barcelona president Josep Maria Bartomeu is travelling to Holland to seal a deal for the 19-year-old centre-back, according to The Sun.

The news will disappoint Liverpool, who had been looking to partner De Ligt with his compatriot Virgil van Dijk at Anfield.

Barca have reportedly made a bid of £51 million, having already added Frenkie de Jong to their ranks in January.

Bartomeu had previously said that De Ligt was on manager Ernesto Valverde’s wish list, saying the Netherlands international’s name was “on the table.”

– Juventus are reportedly contemplating replacing their entire back line.

With Alex Sandro expected to leave in the summer, Marcelo remains the preferred replacement at left-back. However, Juve are also eyeing up moves for Alex Grimaldo and Emerson Palmieri, according to Calciomercato.

– Speculation about the future of France striker Antoine Griezmann continues, with Barca defender Samuel Umtiti telling Marca there would be plenty of room for his compatriot in their strike force.