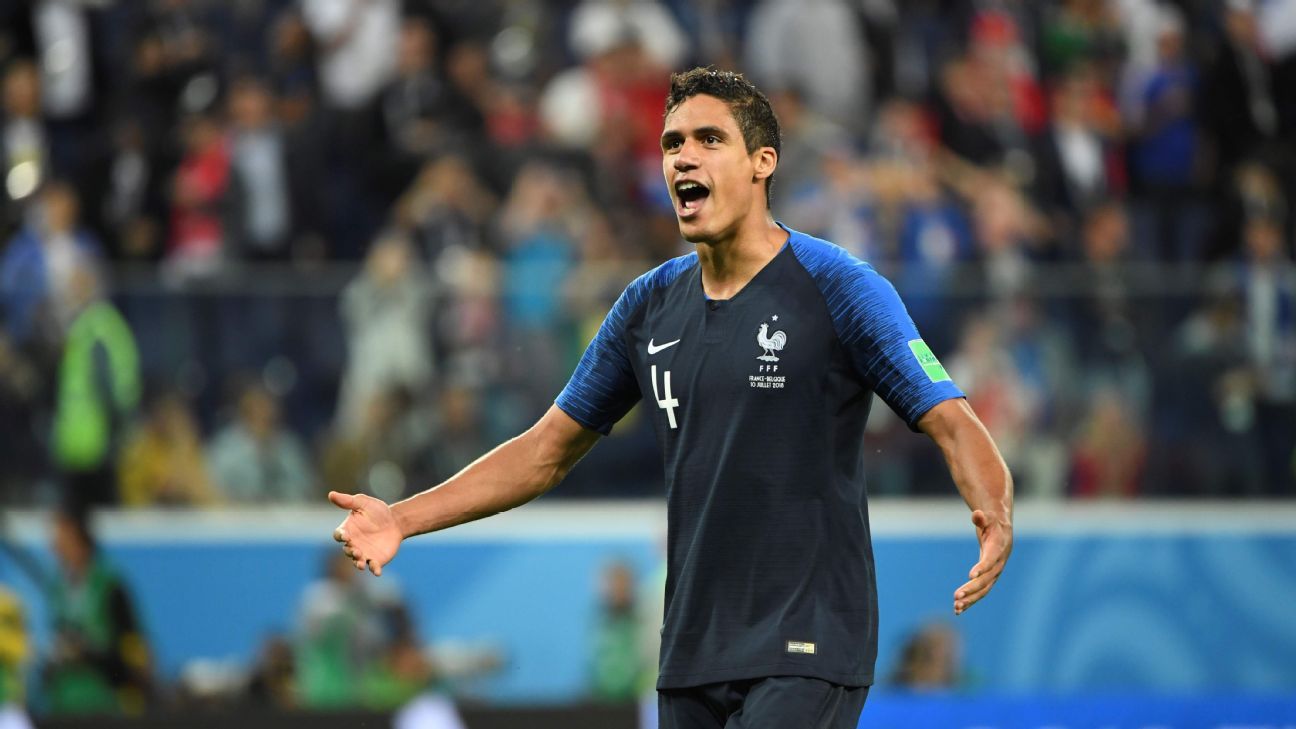 Raphael Varane is thinking about leaving Real Madrid — and that has put Manchester United on alert, according to the Mail.

It reports that football agent Bruno Satin said he had spoken to Anthony Varane, the defender’s brother and agent, who indicated that the France international would be interested in a new challenge.

And that “will interest clubs across Europe, not least United, who are in the market for a world class central defender this summer.”

The Mail says United manager Ole Gunnar Solskjaer has indicated that he is ready to spend heavily to revamp his defence.

Varane, under contract until 2022, is also reported to be of interest to Juventus, where he could link up again with ex-Madrid teammate Cristiano Ronaldo.

22.59 GMT: That’s going to bring Tuesday’s live edition of Transfer Talk to a close. Be sure to check back in a few short hours when we return with the latest gossip pulled from Wednesday’s back pages.

22.06 GMT: Earlier in the day we brought you the latest updates on Ander Herrera‘s potential plan to leave Manchester United on a free transfer for Paris Saint-Germain, and now Sky Sports is reporting that the Red Devils are in jeopardy of losing another Spaniard on a free, with Juan Mata reportedly holding discussions with Barcelona over a move to the Camp Nou in the summer.

20.29 GMT: Barcelona playmaker Philippe Coutinho will be allowed to leave the club in the summer, according to Catalan outlet Sport, who reports that Chelsea, Paris Saint-Germain and Manchester United have emerged as the front-runners for the Brazilian international’s signature, with the West Londoners the most likely destination — should they successfully appeal for a delay to their transfer ban.

18.52 GMT: The Independent reports that Manchester United have made Borussia Dortmund prodigy and Manchester City academy graduate Jadon Sancho their No. 1 priority this summer, leading Real Madrid and Paris Saint-Germain in the race for the 19-year-old’s signature that could net the Bundesliga leaders £100m plus add-ons.

17.15 BST: Manchester United would like Juan Mata to become a club ambassador, it is being reported in the Manchester Evening News.

Mata has been in and out of the team as he enters the final six months of his Old Trafford deal and has yet to agree a contract extension.

16.23 BST: Jose Mourinho remains the frontrunner to be named Inter Milan’s new boss should Luciano Spalletti leave in the summer, but Il Corriere dello Sport report there are two other names in the hat. And Inter are thinking big.

As well as Mourinho, another ex-Chelsea manager Antonio Conte is on the shortlist, as is Juventus boss Massimiliano Allegri, who could leave the Allianz Stadium at the end of the season.

15.31 BST: Mauro Icardi will return to the Inter Milan starting lineup for the clash with Genoa, manager Luciano Spalletti has confirmed — but that does not mean he will be staying of the fans have anything to do with it.

A statement from the club’s main ultra group Curva Nord demanded he leave the club and said “Icardi is no longer part of Inter and from now on will be treated that way.”

“Several players are approaching the end of their contracts, or have 1 year left.,” he said when asked about the Brazil international’s situation. “We must discuss their situations with the president & sporting director. I cannot say anything more for now.

13.57 BST: Back to Leicester City, where speculation about who might arrive during Brendan Rodgers’ first season in charge continues apace. The latest name in the frame is midfielder Victor Camarasa, currently on loan at Cardiff from Real Betis, according to the Leicester Mercury.

13.23 BST: Atletico Madrid coach Diego Simeone has said he is keen for striker Diego Costa, 30, to stay at the club next season despite his injury problems during the current campaign. “I want Diego to say,” Simeone said. “I have complete trust in him, and I want him to continue next year.”

12.21 BST: Bournemouth manager Eddie Howe has said he is not interested in discussing transfer speculation surrounding defender Nathan Ake, who has been linked with Manchester United and Tottenham. “It’s not the time, especially with players who are very settled and in good form, for me to necessarily talk about transfer speculation regarding them,” he told a news conference.

11.54 BST: To France now, where L’Equipe reports that Marseille sporting director Andoni Zubizarreta is top of Arsenal’s list of targets to take on that role in North London.

11.27 BST: Chelsea defender Reece James has made such an impact on loan at Championship club Wigan that the Blues could make the 19-year-old part of their first-team squad next season, according to the London Evening Standard.

11.05 BST: Real Madrid coach Zinedine Zidane has said Gareth Bale, linked with a summer return to the Premier League, has the character to deal with whistles and jeers from frustrated fans.

09.55 BST: Atletico Madrid president Enrique Cerezo has told TV Espana that star striker Antoine Griezmann, strongly linked with Barcelona, “will be an Atletico player for many years. He is staying 1,000%.”

09.07 BST: Leicester boss Brendan Rodgers has indicated that he would like to keep on-loan Monaco midfielder Youri Tielemans and the club “are working to make it happen,” according to the Leicester Mercury.

08.47 BST: Real Madrid defender Jesus Vallejo has become frustrated by a lack of first-team opportunities and wants to move on, according to La Sexta.

08.36 BST: Barcelona have been linked with Eintracht Frankfurt striker Luka Jovic, but reports in France suggest he is now in talks with Paris Saint-Germain. Frankfurt are believed to value him at around €60m.

Fernandes, 24, tied to Sporting Lisbon until June 2023, has attracted the attention of top clubs following an impressive campaign in which he has scored 14 goals and set up 10 in 26 league appearances.

Felix — the 19-year-old attacking midfielder dubbed “the new Ronaldo” by the Portuguese media — has been linked with United, Juventus, Barcelona and Real Madrid. He was promoted to Benfica’s first team last summer and has scored 10 goals and set up five more in 18 league appearances.

Meanwhile, Portuguese outlet Record reports that Paris Saint-Germain scouts will be in attendance to watch Fernandes and Felix  at Wednesday’s Portuguese Cup semifinal between Benfica and Sporting.

Asked about the attacking midfielders, their fellow Portuguese Mourinho told reporters during a meeting of the national coaches association in Portimao: “I think they should be left alone and not talk about Cristiano [Ronaldo]. It’s ridiculous to talk about Cristiano and compare him with talent that emerges, however big he is.

“But listen, these two are great talents. They can play in any club in the world.”

Both sides want to add a ball-playing defender to their ranks, and Spurs sent scouts to watch the 26-year-old in Everton’s comfortable 2-0 victory at West Ham at the weekend.

Toby Alderweireld‘s Spurs future remains the subject of speculation, while his Belgian compatriot Jan Vertonghen turns 32 at the end of April and boss Mauricio Pochettino is determined to add some youth to his back line.

Arsenal have been watching former Manchester United man Keane for several months but, with the the Mirror reporting that a fee for the England international could be as much as £50 million, Gunners boss Unai Emery might be forced to look elsewhere this summer.

Manchester United will not give in to Ander Herrera‘s contract demands, despite the Telegraph linking him with a free transfer to Paris Saint-Germain.

Herrera, 29, is looking for a deal in excess of £200,000 a week, more than double the £80,000 salary he is currently earning, and the former Athletic Bilbao man is attempting to use interest from France to secure a pay rise.

But United remain confident of securing an agreement at a much lower rate, albeit one that will still exceed his current earnings.

Herrera is not the only Spain international locked in a contract battle at Old Trafford, with goalkeeper David De Gea holding out for a £500,000-a-week deal.

Madrid could move for Atleti’s Gimenez

Zidane’s preferred option at the back is Napoli’s Kalidou Koulibaly, but AS says Perez fears being priced out of a move for the Senegal international.

Koulibaly is under contract in Serie A for another four years, putting Carlo Ancelotti’s side in an extremely strong negotiating position.

A move for Uruguay international Gimenez would also be complicated, however. Atletico have already agreed a deal to sell left-back Lucas Hernandez to Bayern Munich, while Gimenez’ central defensive partner, Diego Godin, looks set to leave for Inter Milan.

But that isn’t putting off Perez, with the 72-year-old rumoured to have already held discussions with his target in December.

– Spurs have no plans to sell under-fire goalkeeper Hugo Lloris, despite his glaring error in the 2-1 defeat at Liverpool on Sunday. The Mail reports that Tottenham are instead looking to strengthen in other areas.

– Arsenal are in the hunt for Bournemouth winger Ryan Fraser and are set to make a move for the Scotland international in the summer, according to the Mirror. Gunners scouts have given glowing reports after watching the 25-year-old in action.

– Tuttosport says Tottenham have joined the race for Juventus winger Douglas Costa. Costa has not featured for the Serie A champions since early February, and a fee of £60m should be enough to secure the 28-year-old’s signature.