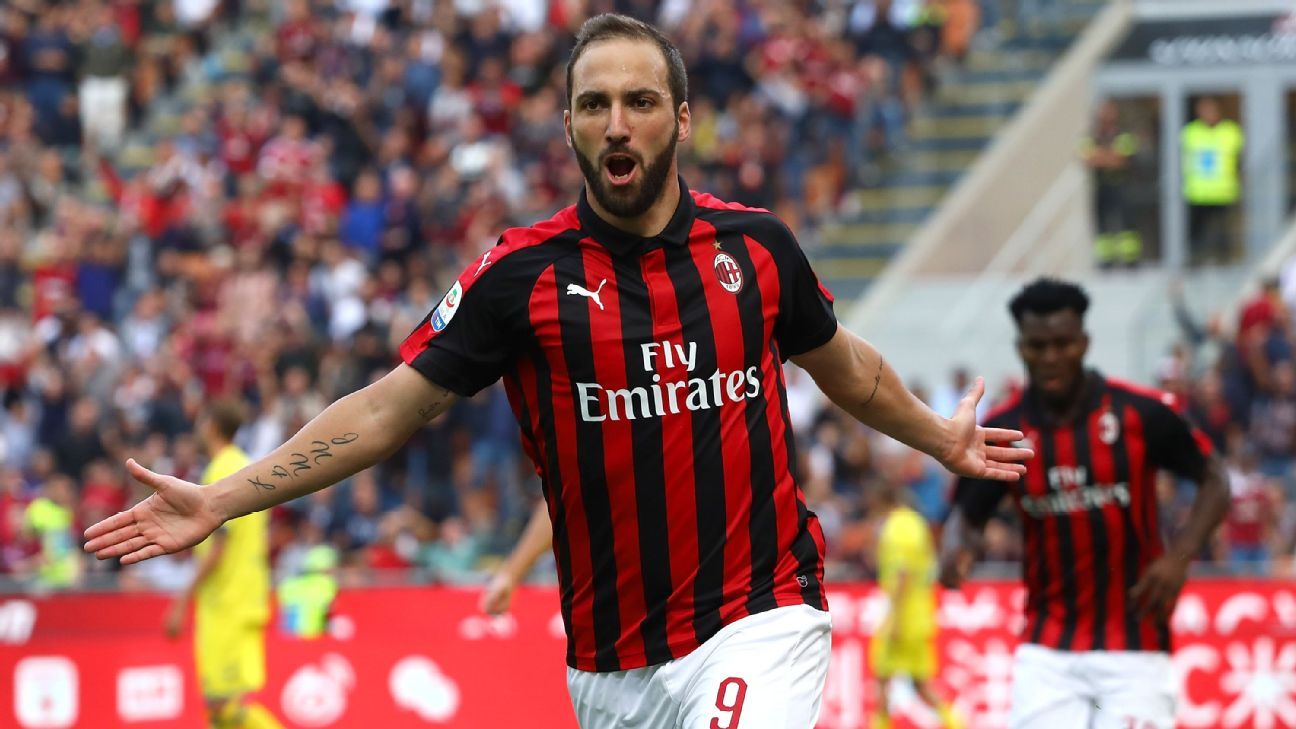 Marca in Spain claim that Chelsea are close to signing Gonzalo Higuain from AC Milan.

Blues boss Maurizio Sarri is keen to add a striker to his squad this month with Alvaro Morata possibly returning to Spain.

But Chelsea seem close to pulling off a major coup with Higuain having “accepted their offer.” The Argentina international thrived under Sarri at Napoli, scoring a record 36 Serie A goals during the 2015-16 season.

The deal would involve the 31-year-old joining the Premier League side on loan with an option to sign permanently in the summer for approximately £36 million.

Dortmund are in the market for a wide player after confirmation that Christian Pulisic will join Chelsea in the summer and they have made Hazard their top target.

The Belgium international, the brother of Chelsea star Eden, has excelled in the German top flight this season with nine goals and six assists in 17 games.

The 25-year-old has also attracted interest from the Premier League but the Bundesliga leaders have emerged as clear frontrunners. Hazard would cost Dortmund around £38m.

Manchester City have opened talks with club captain Vincent Kompany regarding a contract extension. The 32-year-old’s current deal with the Premier League champions expires at the end of the season but Pep Guardiola is hopeful he will commit to fresh terms.

“We are talking about that — I would like it,” Guardiola said. “He’s our captain, 11 years here, we saw in the last two [league] games the huge quality and personality he has to play. The only problem with Vincent is one: his injury problems.”

Crystal Palace want to sign Tammy Abraham after the striker turned down the chance to join Wolves on loan.

The 21-year-old, currently on loan at Aston Villa from Chelsea, was expected to make the switch to Molineux before a change of heart saw him stay at Villa Park on Tuesday.

But Abraham’s future may not be resolved yet with The Mirror saying he is now subject of interest from Palace.

The Eagles are shopping for reinforcements up front after pulling out of a deal to sign Dominic Solanke before he joined Bournemouth from Liverpool.

Bilbao sporting director Rafa Alkorta has confirmed the club’s interest in re-signing Spurs striker Llorente. The 33-year-old is one of several players being targeted by the Basque side as they attempt to avoid relegation from La Liga. Llorente has been behind Harry Kane in the Tottenham pecking order since joining from Swansea in 2017 and may be tempted by the opportunity for regular first-team football given that he is yet to start a Premier League game this season.

Although United are expected to have a relatively quiet January window, the club are willing to break the bank to sign Koulibaly in the summer. The Senegal international is reportedly one of United’s top defensive targets but would likely cost in excess of the world record £75m Liverpool paid for Virgil van Dijk. Real Madrid are also showing interest in the 27-year-old.

The Hammers are set to make an improved offer for the defensive midfielder, who is open to leaving Besiktas this month. The 31-year-old, who has 114 caps for Chile, spent one year in England with Cardiff City before joining Inter in 2014. He moved to Besiktas in 2017 but the Turkish club are willing to sell Medel if their valuation is met.

Having made overtures to the Croatian in the summer, Inter are ready to revive interest in Modric and test Real Madrid’s resolve with another bid. The 33-year-old has struggled to recapture the form that saw him win the Ballon d’Or at the end of 2018 but the Nerazzurri believe Real’s current struggles, with the club lying fifth in La Liga, may help their pursuit of the playmaker.

Modric may be joined at the San Siro by Herrera, with the Mexico international said to have his heart set on a move to the Italians. The 28-year-old, who has previously attracted interest from Tottenham, is out of contract at Porto at the end of the season and is ready for a new challenge after almost six years in Portugal.