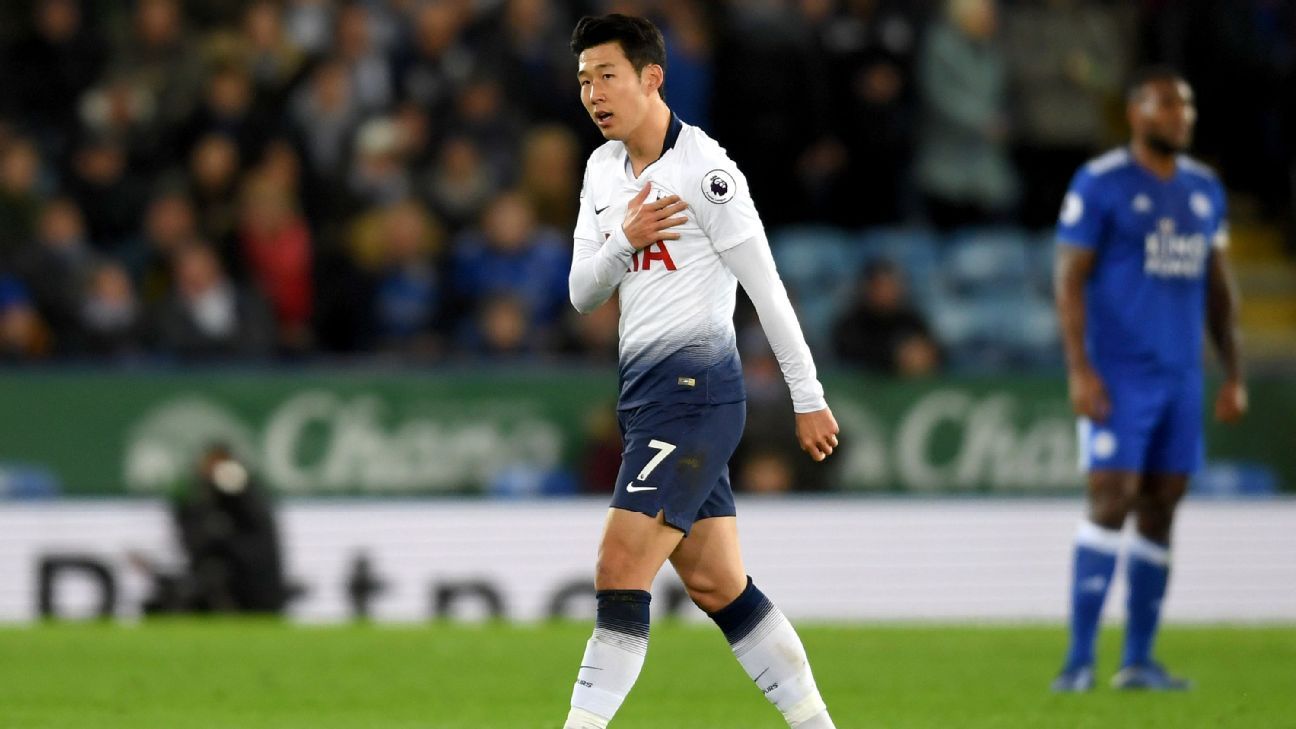 Mauricio Pochettino admits he was disappointed with Son Heung-Min’s performances earlier this season but says he has been delighted with the South Korean’s recent displays.

Son, who played at the World Cup and then the Asian Games in the summer, failed to score in his first nine games for Spurs this campaign. But he shone in Saturday’s 2-0 win at Leicester, scoring Spurs’ first goal and setting up the second for Dele Alli.

The 26-year-old has now scored three goals in his last four starts, while also winning a penalty at Arsenal, and Pochettino said: “I’m so happy [with him] after the international break.

“The first few months of the competition, a little bit disappointed because he struggled a lot. But after rest and avoiding going with the national team [in November], I think he was so focused in trying to improve, and today he improved a lot from [Spurs’ win over Chelsea on Nov. 24].

“Now we’re so happy with his contribution and performance. That is the player that we want and expect that energy from.”

Pochettino rested Harry Kane and Christian Eriksen at Leicester, only introducing them off the bench in the final 25 minutes, ahead of Tuesday’s crucial Champions League clash with Barcelona at the Nou Camp.

Spurs’ victory displayed their strength in depth but Pochettino said: “I think it’s not a thing [we need] to show anyone, because the belief we have in our squad is massive.

“With this decision we’re showing we believe and trust in all the squad, and how important all the players are in this very busy period, when everyone needs to be focused.

“It’s always about the best decision, first of all for the player and then for the team. It’s no point that players can play every three days in this busy period. It’s not healthy. The players need to rest. They need to sometimes breathe.

“The most important thing is to be genuine in the trust that you have in your squad because it’s so easy to say ‘I trust them’ but in the end the moment arrives and you never give them the possibility to play.”

Pochettino may be without his top two right-backs at the Nou Camp, with Kieran Trippier missing the trip to Leicester with a groin problem and Serge Aurier limping off in the second half. The Argentinian turned to Kyle Walker-Peters in the 78th minute at the King Power Stadium, handing him only his second appearance of the season — and he is ready to pick the 21-year-old against Barcelona if necessary.

“We’ll see [how Aurier is],” he said. “We need to assess him tomorrow. I really don’t know if he’s going to be ready or not to play.

“I think [Walker-Peters] is ready to play. All the players that we have in the squad — the younger ones like Oliver Skipp or Troy Parrott, who was involved [in the travelling 19-man squad] today for the first time, it’s because they’re involved in the first team during days, during weeks, during months, and it’s only about giving them the possibility to play.

“I don’t doubt and I’m not worried about players who are injured or don’t perform at their best, because we have another who can replace them.

“It will be a massive game [against Barcelona]. It’s true they’ve qualified for the next stage but in the Champions League no one is going to give a present.

“Of course the mentality is going to be 200 percent to win because it’s a game that we must win. I think we’re going to arrive in the best condition but we know very well that in front of us will be Barcelona, one of the best teams in Europe.”