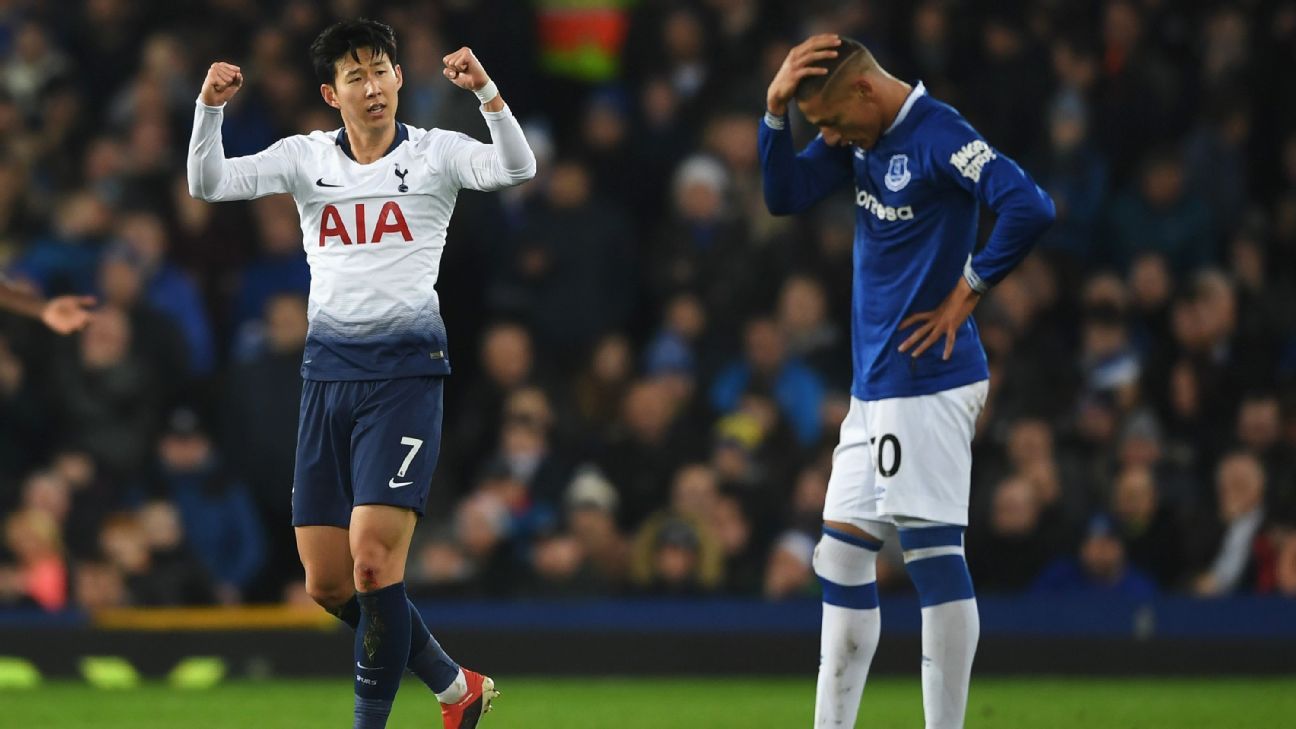 Spurs fell behind in the 21st minute after Theo Walcott’s opener, but were 3-1 up at half-time after strikes from Son Heung-Min, Dele Alli and Harry Kane. Christian Eriksen ensured there was no let-up after half-time, scoring soon after the interval from the edge of the box. And, although Gylfi Sigurdsson pulled a goal back for the hosts, Son and Kane both scored their second goals to wrap up the triumph.

Tottenham, who have developed a habit of hitting top gear at this time of year, seem to be getting better with every match. This result followed Wednesday’s 2-0 victory at Arsenal, and they have now won 11 of their past 13 games in all competitions. Even more impressively, they have also won nine of their 11 Premier League away matches.

It has been a great weekend for Spurs in general, given Manchester City and Chelsea both suffered surprise home defeats on Saturday, and the strike partnership between Son and Kane is blossoming.

Spurs’ defending was suspect at times and they nearly found themselves 2-0 down in the first half — a headed goal from Dominic Calvert-Lewin was ruled out for a push on Davinson Sanchez just before the comeback. Alli also had to be withdrawn at half-time after hurting himself in a challenge with Jordan Pickford. It remains to be seen whether he will now miss some games.

9 — Mauricio Pochettino took few chances, only making three changes from his lineup at Arsenal on Wednesday, and his team selection was rewarded, along with his tactics. His decision to play with two strikers and a midfield diamond worked brilliantly, with four of his front five players scoring.

GK Hugo Lloris, 5 — Everton only had three shots on target and two of them went in. He was slow to get to Sigurdsson’s shot.

DF Kieran Trippier, 7 — Suspect defensively at times and Calvert-Lewin got in behind him to set up the opener, but he twice freed Kane with passes over the top, the second resulting in Eriksen’s goal, and his free kick against the post gifted Kane his first goal.

DF Davinson Sanchez, 6 — Looked a little rusty on his return from injury. Calvert-Lewin troubled him early on and he could have done better for Sigurdsson’s goal as he failed to get a challenge in. But his passing out from the back helped to start a number of attacks.

DF Toby Alderweireld, 7 — Also could have done better for Sigurdsson’s goal as the Icelander made his way across the box, but he was generally reliable.

DF Ben Davies, 6 — The Welshman couldn’t stop Walcott from scoring the opener and allowed Sigurdsson to get outside him too easily for Everton’s second goal, but his pass down the line freed Son to set up the sixth goal.

MF Harry Winks, 7 — Had a few lapses early on, allowing Sigurdsson to get behind him when Richarlison headed wide and then letting the ball bounce over him in the build-up to the opening goal, but he was influential on the ball as usual.

MF Moussa Sissoko, 8 — Made his 100th appearance for the club and, despite starting his fifth successive match, offered his customary energy while playing a key role in his side’s second goal as he played in Son with a through ball.

MF Christian Eriksen, 8 — Scored with a wonderful strike from the edge of the box before sending Erik Lamela running at Everton’s defence to set up Son’s second goal.

MF Dele Alli, 8 — Put Spurs 2-1 ahead, scoring for the second match in a row after his sublime finish at Arsenal, before being withdrawn at half-time.

FW Harry Kane, 9 — Missed a few first-half chances but went on to score twice while also playing a key role in Spurs’ first and fourth goals. He has now scored twice in four successive matches against Everton.

FW Son Heung-Min, 10 — Perfect scores are rare but hey, it’s Christmas! The South Korean scored twice, set up Kane’s second strike with a fine first-time cross, forced the save that produced Alli’s goal and laid on a chance for Trippier. Son has now been directly involved in 50 Premier League goals in 112 appearances for Spurs, with 35 strikes and 15 assists.

MF Erik Lamela, 6 — Released Son for his second goal but was otherwise sloppy in possession.