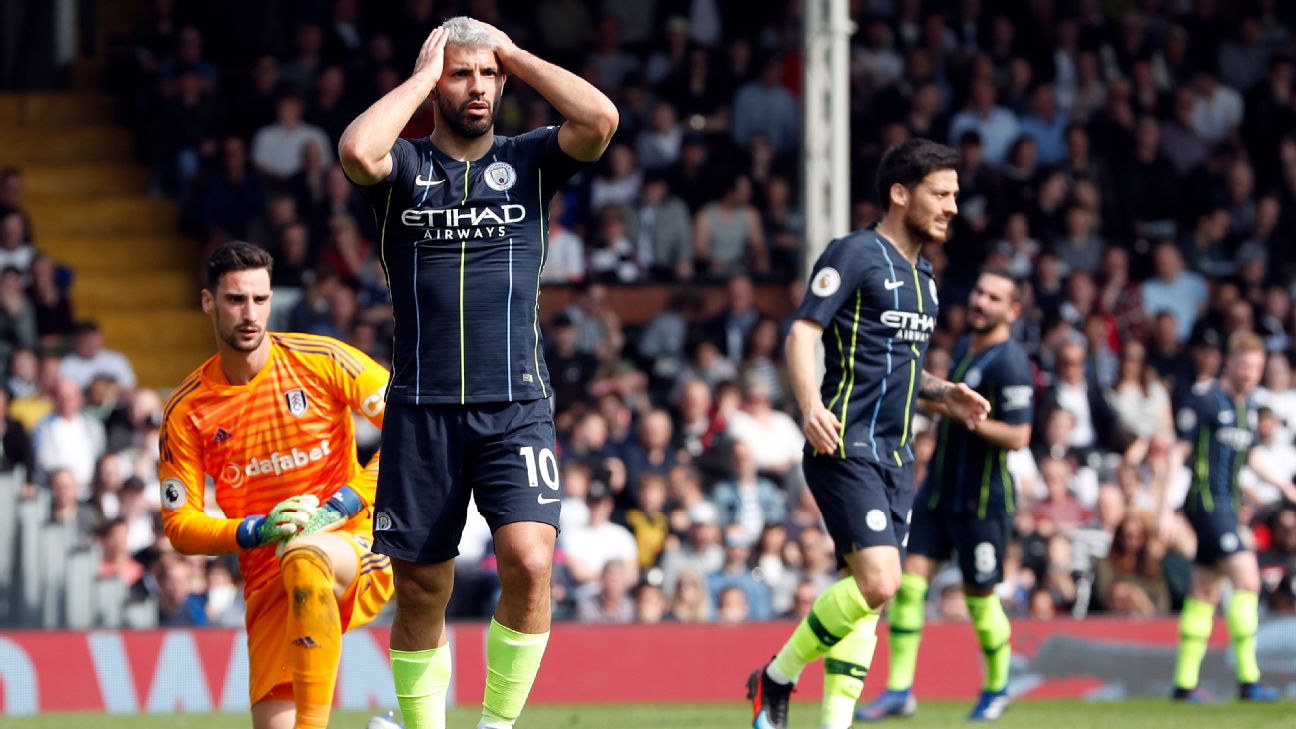 LONDON — Anyone seeking definitive clues as to the destination of this season’s Premier League title could probably have taken the afternoon off, for Manchester City will not enjoy a more comfortable assignment than their 2-0 win vs. Fulham over the next six weeks.

Had the mood taken them on a sun-drenched day by the River Thames, they could have added handsomely to their goal difference, but it was hardly an occasion on which to operate at full throttle. What matters is that, with the season’s final lap underway, Pep Guardiola’s side are back in the driving seat, one point clear of Liverpool at the top.

If there is a flicker of concern, it will stem from the fact Sergio Aguero, who put the game beyond Fulham with City’s second goal in the 27th minute, left the pitch before an hour had been played.

“He said he felt something but not injured,” Guardiola said. “For precaution he decided not to continue. We will see tomorrow.”

With Aguero’s track record of sustaining muscle injuries, those of a City persuasion can be excused a few jitters amid hope that it was a safety-first measure on the Argentine striker’s part. Wednesday’s match against Cardiff should be the kind in which Gabriel Jesus comfortably deputises, ahead of tougher tests later in April.

Aguero (and Guardiola) will be well attuned to the fact that next weekend’s FA Cup semifinal with Brighton holds no guarantees and is followed three days later a Champions League quarterfinal first leg away to Tottenham. At 30, he knows his body well enough to minimise the risk of adding to the eight games he has missed in all competitions this term.

His goal, clipped inside the far post sublimely from a tight angle after Fulham’s Joe Bryan had gifted possession, was a reminder that Aguero turns half-chances into clear openings and it is a facet City will require against sterner opposition than Scott Parker’s relegation-bound Fulham.

If questions remain about City’s title bid then there is also the debate about whether, in all honesty, games such as this are good for anyone. From the moment Guardiola’s men went 2-0 in front, it was played with the pace and intent of a preseason friendly.

City had no need to go all out, given their battle on three fronts and inevitable post-international break ring rust, while Fulham, who continue to give an object lesson in how not to go about a Premier League season after earning promotion, were simply unequipped to lay a glove on their visitors.

Even the home fans’ protest against high admission prices — a small demonstration took place in the 55th minute to match the day’s cheapest adult ticket of £55 ($71) — seemed muted, although it is hard to see how anyone got value for money.

The loudest cheers erupted upon moments of mild farce, like the series of passes Fulham managed to string together around the quarter-hour mark after barely completing one before then and the shot that City’s Nicolas Otamendi skied over the Putney End in the 53rd minute.

City were ruthless in exploiting mistakes early and Fulham’s near-constant concessions of the ball around their own penalty area beggared belief; Bernardo Silva‘s low, inch-perfect curler in the fifth minute arrived after sloppy play from Timothy Fosu-Mensah and the undercooked ball from Bryan that set Aguero away was also entirely characteristic of their display.

Fulham did not register a shot on target in a home fixture for the first time in nine years; couple that with Bournemouth’s failure to have any kind of goal attempt against City when they met at the Vitality Stadium earlier this month and it is not a good look for the league, even if Guardiola’s men can hardly be blamed for that.

The Aguero concern aside, City’s only other regret on such a serene day might be that they could not add further gloss to the scoreline. Kyle Walker struck the post late on while Raheem Sterling, so clinical of late for club and country, was off-key with his finishing and had one of his less efficient days.

“The game was under control, that is the truth,” Guardiola said. “We missed maybe one more goal, but that’s OK. [It was the] international break and people told me they were tired. I’m sure in the next game our pace will be a little bit better.”

If that is the case, Cardiff should surely be brushed aside at the Etihad during what is, effectively, City’s game in hand.

“We have to win every game,” Guardiola said. “We have tough opponents; that is the challenge.”

City’s only real opponents on Saturday were themselves and, with the hurdle duly cleared, attention turns to Anfield. For Liverpool, who will surely be tested more by Tottenham than were City by Fulham, the pressure has been ratcheted up further before their own run-in has begun.