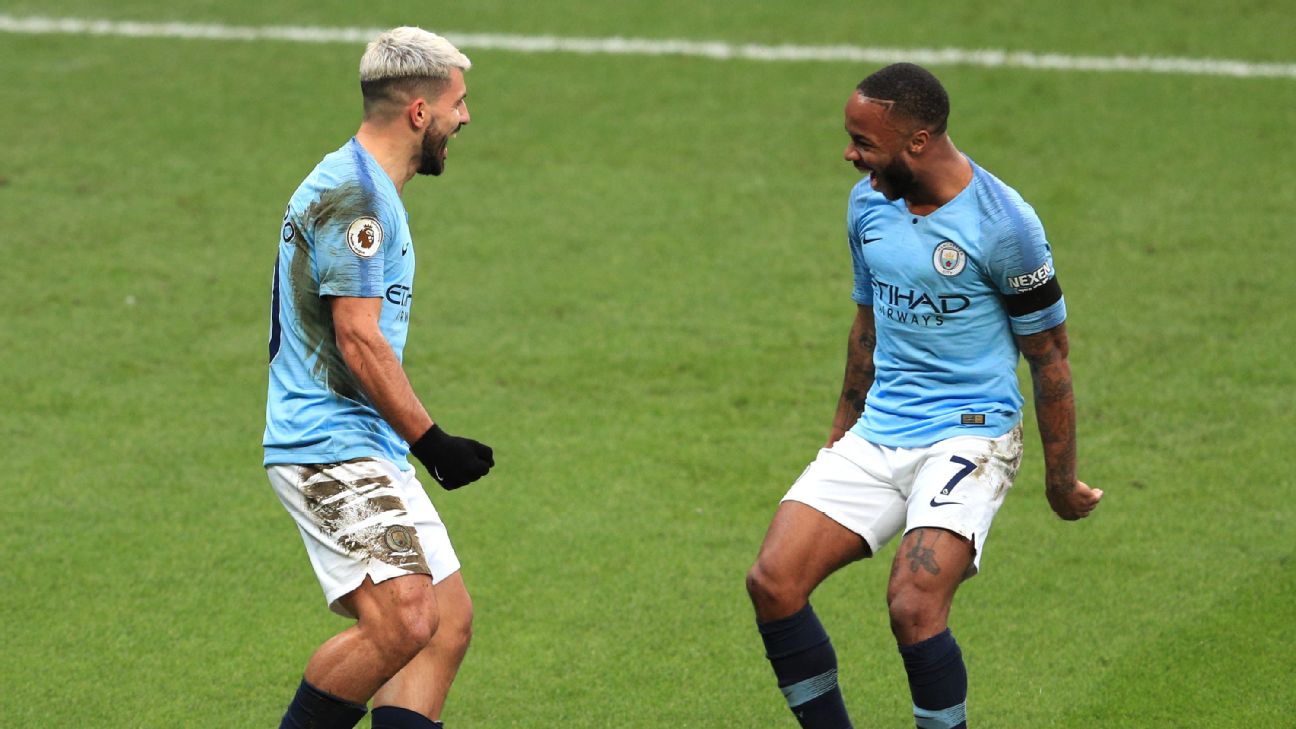 Manchester City moved back top of the Premier League with an emphatic 6-0 victory over Chelsea. Sergio Aguero scored a record-equalling 11th hat trick of his City career while Raheem Sterling (twice) and Ilkay Gundogan were also on target.

It looked like an important week for City in the title race with home games against top-six sides Arsenal and Chelsea sandwiched by a difficult trip to Everton. Pep Guardiola’s side have breezed through it in a way that will build confidence — as well as their goal difference — as they go punch-for-punch with Liverpool at the top of the table.

Chelsea created a couple of good opportunities and City missed chances to win by more, but it would be harsh to pick out weaknesses when a supposed title rival was dismantled in such devastating fashion.

9 – Maurizio Sarri surprised Guardiola with a low press when Chelsea won the reverse fixture at Stamford Bridge, but there was no doubting who won Sunday’s tactical battle. Gundogan and Kevin De Bruyne‘s movement in midfield was too much for Chelsea’s midfield, while their hard-running stifled N’Golo Kante and Ross Barkley‘s bursts forward.

GK Ederson, 8 — Made one good save when Pedro was clean through and another from Gonzalo Higuain‘s dipping volley. Ederson’s footwork was perfection in the face of Chelsea’s high press.

DF Kyle Walker, 7 — Had the toughest task of the day against the skill and threat of Eden Hazard but kept the Belgian international mostly quiet.

DF John Stones, 7 — Comfortable with the ball at his feet when he picked up possession in deep positions and was strong defensively.

DF Aymeric Laporte, 7 — Had extra responsibility with the inexperienced Oleksandr Zinchenko outside him, as well as the physical threat of Higuain, but coped well.

DF Oleksandr Zinchenko, 7 — Understandably, he looked nervous after recalled for such a big match, but grew into the game and ended up with two assists.

MF Fernandinho, 8 — He could have been swamped as Chelsea tried to push forward through midfield but ultimately bossed the centre of the pitch.

MF Kevin De Bruyne, 7 — Caused Jorginho plenty of trouble with his smart movement that led to City counter-attacks. De Bruyne was also alert for the quick free kick that brought the opening goal.

MF Ilkay Gundogan, 8 — Picked ahead of David Silva, he justified his selection with an intelligent performance and delightfully-taken goal.

FW Sergio Aguero, 9 — Missed an absolute sitter from 2 yards but more than made up for it with a stunning 25-yard strike before going on to complete a hat trick that makes Aguero City’s all-time leading scorer in league play.

FW Raheem Sterling, 9 — Showed how his confidence has grown in front of goal by slamming in the first and last goals, amid a display that saw him pull Chelsea’s defence apart all afternoon.

FW Gabriel Jesus, 7 — Worked hard and played a key role in the build-up to City’s sixth.

FW Riyad Mahrez, 5 — He has been overlooked in recent weeks and tried a bit too hard to impress.