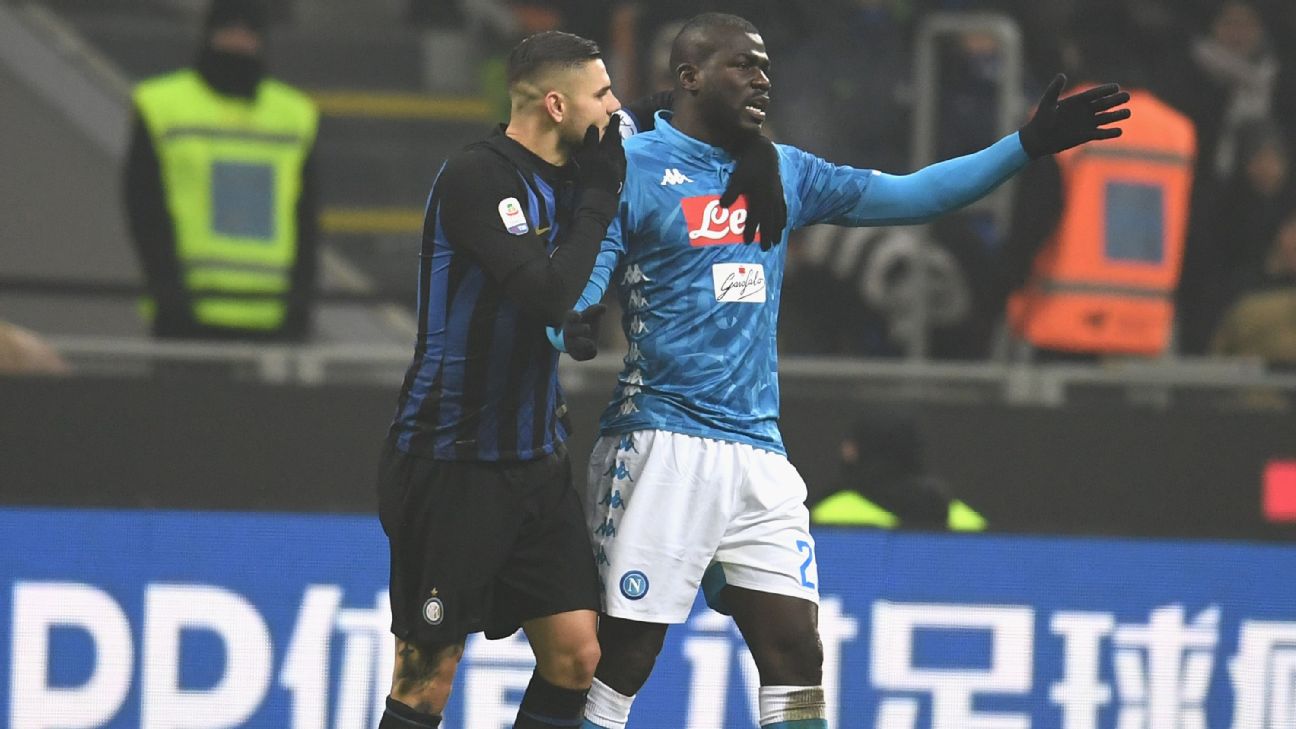 Football Against Racism in Europe (Fare network) has told ESPN FC repeat offenders of racism should be relegated or receive points deductions and has urged Serie A to take the issue more seriously after Inter Milan were found guilty of abusing opposition players for the third time in less than four months.

In December, Inter were handed a two-match stadium closure after supporters aimed monkey chants at Napoli defender Kalidou Koulibaly. In their first home match following the ban on Feb. 3, a Bologna player was racially abused — but no ban was forthcoming, with a Serie A statement confirming it was because chants were drowned out by fellow supporters.

Before the Bologna match, Inter fans had criticised the club for failing to show them their support and labelled Koulibaly a “little man” in a fanzine handed out in the Curva Nord.

And during the Milan derby on March 17, Lega Serie A handed the club a suspended partial stadium closure after “a significant percentage” of fans were found guilty of racist abuse towards AC Milan’s Franck Kessie.

Asked what an appropriate punishment for racist chanting would be, Fare executive director Piara Powar told ESPN FC: “The UEFA and FIFA disciplinary codes, which should be reflected in the Italian disciplinary regulations, clearly make provisions for points deduction or even relegation for serious and repeated offenders.

“Serie A and FIGC have to send a clear signal that racism will not be tolerated and issue stronger sanctions. A suspended sanction means there is no immediate punishment whatsoever for racist conduct.

“This certainly does not reflect the ‘zero tolerance towards discrimination’ policy. “It is beyond common sense that the club is getting a suspended partial closure of their stadium as a sanction after repeatedly engaging in racist behaviour this season.

“It shows that racism is taken as a minor offence in Italy and can lead to even more racism as fans see they can pretty much get away with it.”

Italy international Mario Balotelli was the victim of racist abuse when playing for Inter in 2009 and recently said racism is much worse in Italy than in England or France.

Despite that incident occurring a decade ago, little has changed since as incidents of racism remain prevalent in Serie A — and Powar said that what happens in football stadiums is a reflection of Italian society.

“The situation with racism in Italian football has been very concerning since we’ve witnessed the treatment Mario Balotelli often received, we also have to remember that the former president of FIGC [Carlo Tavecchio] was banned from all football-related activity by UEFA for six months [in 2014] after making racist comments,” Powar said.

“The current political situation in Italy where certain parties and their leaders in the government openly vilify ethnic minorities emboldens racists in the football stadiums too.”

Serie A declined to respond when contacted. ESPN FC has approached Inter Milan for comment.