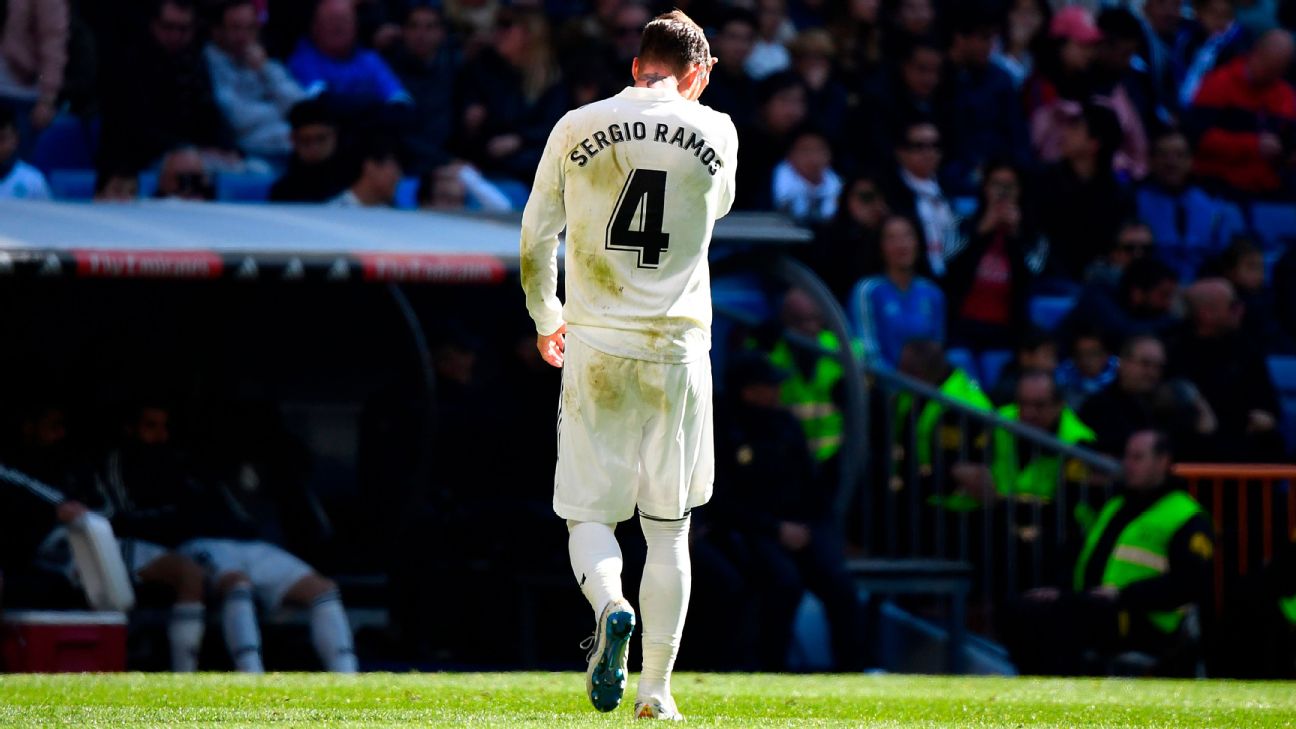 Real Madrid appeared to be easing to a straightforward win against Girona in Sunday’s La Liga clash at the Bernabeu — but the Catalans turned the game around in the second half to take a deserved 2-1 victory.

It is difficult to take many positives from a performance which recalled many of the problems Madrid have faced all season. One bright spot was club captain Ramos’ latest sending off means he will serve a suspension next week in La Liga, leaving him free for the following week’s Clasico against Barcelona.

Madrid fell asleep in the afternoon sun after half-time having been in full control of the game at the break. Their second half performance a return to the unfocused and unimpressive displays from earlier in the season. Luka Modric’s influence was badly missed in midfield and both full-backs struggled particularly when targeted by Girona’s wingers.

6 — Santi Solari tried to react as his team lost their way completely in the second half, but his attack-minded changes just made them more open to Girona’s counter-attacks. Any chance of a La Liga title push now surely over with Madrid now nine points behind leaders Barca in the table.

GK Thibaut Courtois, 6 — Bravely saved an early Cristhian Stuani shot with his face, but won’t have been happy with a couple of spectacular saves which nonetheless provided rebounds for Girona’s forwards – especially for Portu’s late winner.

DF Raphael Varane, 7 — Returning from flu, the France international was the best of Madrid’s back four, particularly when handling the physicality of Stuani.

DF Sergio Ramos, 4 — Ramos’ 601st game for Madrid — which takes him fifth on club’s all-time appearances list — brought his 25th red card. The first for clearly blocking a goal-bound shot with his hand, the second for protests after a foul given for a dangerous bicycle kick in opposition box.

DF Marcelo, 5 — A first La Liga start since early January saw him ruled offside when finishing well to net with his right-foot near half-time. But most of Girona’s dangerous attacking moves second half – including the move for the penalty equaliser — came down his side.

MF Dani Ceballos, 6 — Enjoyed the first half while stepping in for suspended Modric in midfield, less prominent after the break as Girona took control of the game, and subbed off in tactical shift to 4-2-3-1.

MF Casemiro, 6 — Opened the scoring for the third time in his last five La Liga appearances, with a guided header to net at a set-piece. But in his day job was overrun at times as Girona broke regularly in the second half.

MF Toni Kroos, 6 — Provided an excellent driven cross for Casemiro’s header and very prominent as Madrid ran the midfield. Unable to turn game his team’s way though when needed to step up intensity.

FW Lucas Vazquez, 7 — Unlucky not to get on the scoresheet at 0-0 after creating his own chance with a lovely bit of skill. His defensive help was missed after he was the first player subbed off.

FW Karim Benzema, 6 — Some lovely touches and movement when Madrid were on top, with a number of chances to mark his 300th La Liga game with a goal. Played as a No. 10 late on but struggled to make anything happen.

FW Marco Asensio, 6 — The fit-again winger looked lively on his first start of 2019, especially in the first half, but faded after the break.

FW Vinicius Junior, 7 — Bernabeu’s newest favourite entered to a big cheer before the hour mark. With Madrid now behind in the game the 18 year old seemed to be most likely to turn things back around – and twice came close with right footed curlers from the edge of the area.

FW Gareth Bale, 6 — Introduced for Asensio just after Girona equalised, struggled to get to the pace of a game his team had lost control of and bore brunt of fans’ frustration.

FW Mariano Diaz, 6 — Solari threw on a second centre-forward with his team behind and sent an injury time header wide from six yards out.