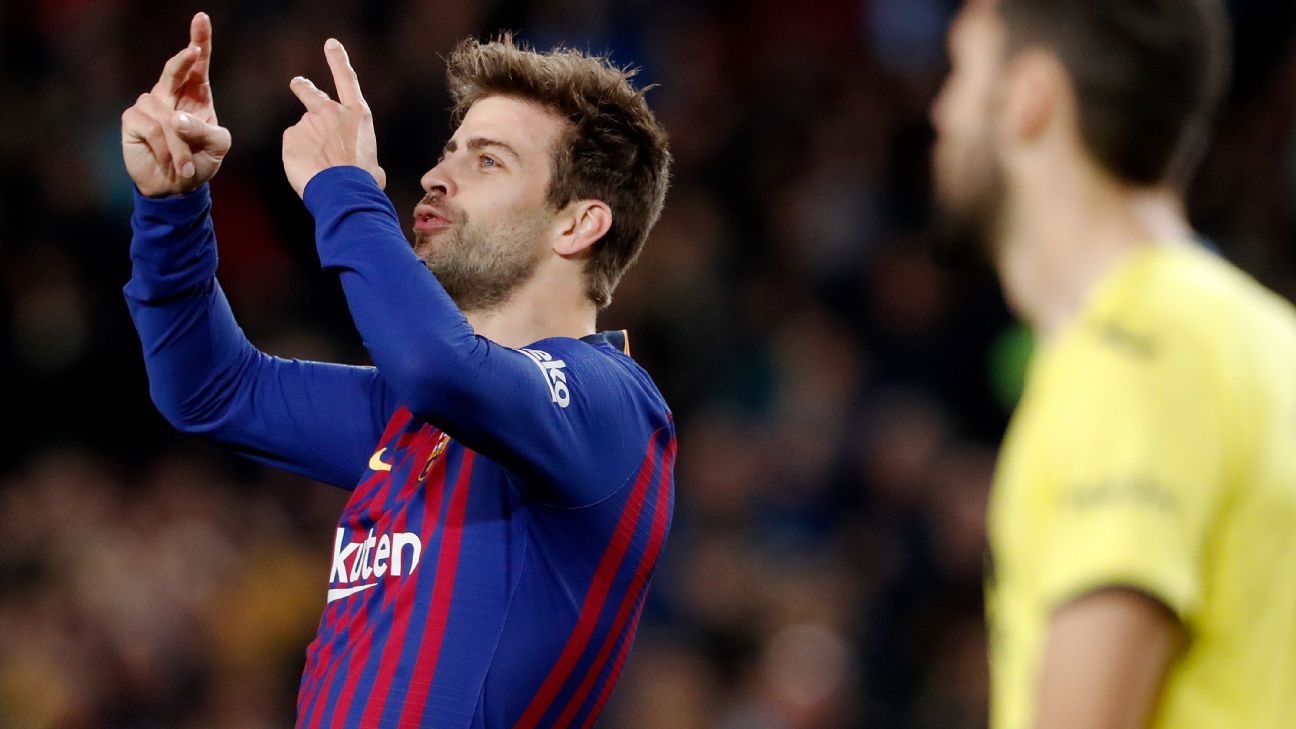 Gerard Pique and Carles Alena were on target as Barcelona beat Villarreal 2-0 to get back to winning ways in La Liga at Camp Nou on Sunday.

Barca took the lead in the first half when Pique headed home Ousmane Dembele’s cross and youngster Alena sealed the three points with a smart finish after the break after coming on as a substitute.

Considering it was quite an uneventful occasion for large parts of the match, there were several positives for Barca. La Masia graduate Alena’s first league goal for the club is the obvious one, but Dembele’s fine individual performance was perhaps the biggest eye-catcher.

This was also a first clean sheet in La Liga since the second week of the season, a one-goal win at Real Valladolid.

Barca came into the game on the back of a loss to Real Betis and a draw at Atletico. Despite getting back on track, this wasn’t an entirely convincing performance. Arthur’s absence was noticeable in midfield as the Catalans struggled to move through the gears

6 – This was Ernesto Valverde’s 400th game as a coach in La Liga and it ended in another win. With the injuries he’s currently dealing with, the side almost picked itself, but he will get credit for bringing Alena on at a time when Villarreal were having their best spell.

GK Marc-Andre ter Stegen, 6 — This was almost a night off in comparison to the midweek win over PSV Eindhoven, when the Dutch side created over 20 chances. He had very little to do against Villarreal, although he was thankful to the woodwork for keeping out Gerard Moreno.

DF Nelson Semedo, 6 — Benefitting from a run of games in the absence of Sergi Roberto, he hooked comfortable and there are signs of a blossoming relationship on the right with Dembele.

DF Gerard Pique, 8 — Good at both ends. Scored a brilliant header to open the scoring and contributed to a long-overdue clean sheet in the league.

DF Jordi Alba, 7 — Got up and down the left flank as he usually does, creating good chances for Lionel Messi and Arturo Vidal.

MF Sergio Busquets, 6 — An improvement from his last outing, against PSV, when he was isolated in midfield. Calm on the ball and also adventurous with some of his passing.

MF Arturo Vidal, 6 — A second consecutive start as the most advanced player in Barca’s midfield three. Did OK until being taken off in the second half, which he seemed unhappy about.

FW Lionel Messi, 7 — By Messi’s standards, nothing exceptional, but still some moments of real quality. Drew a number of saves from Sergio Asenjo and produced a brilliant pass for Alena’s clincher.

FW Philippe Coutinho, 5 — Didn’t have much of an impact for over an hour. Then showed flashes of his quality (one mazy run and whipped shot just wide) before being replaced by Malcom.

FW Ousmane Dembele, 8 — A performance full of life. Did not always make the correct decision but was the most exciting player on the pitch. Caused all sorts of problems with his pace, Cruyff turns and feints. Set up the opener with a good cross.

MF Carles Alena, 7 — The 20-year-old took full advantage of his cameo, producing a lovely dinked finish over Asenjo to seal the win.

FW Malcom, N/R — Looped a header over after coming on for the final few minutes.