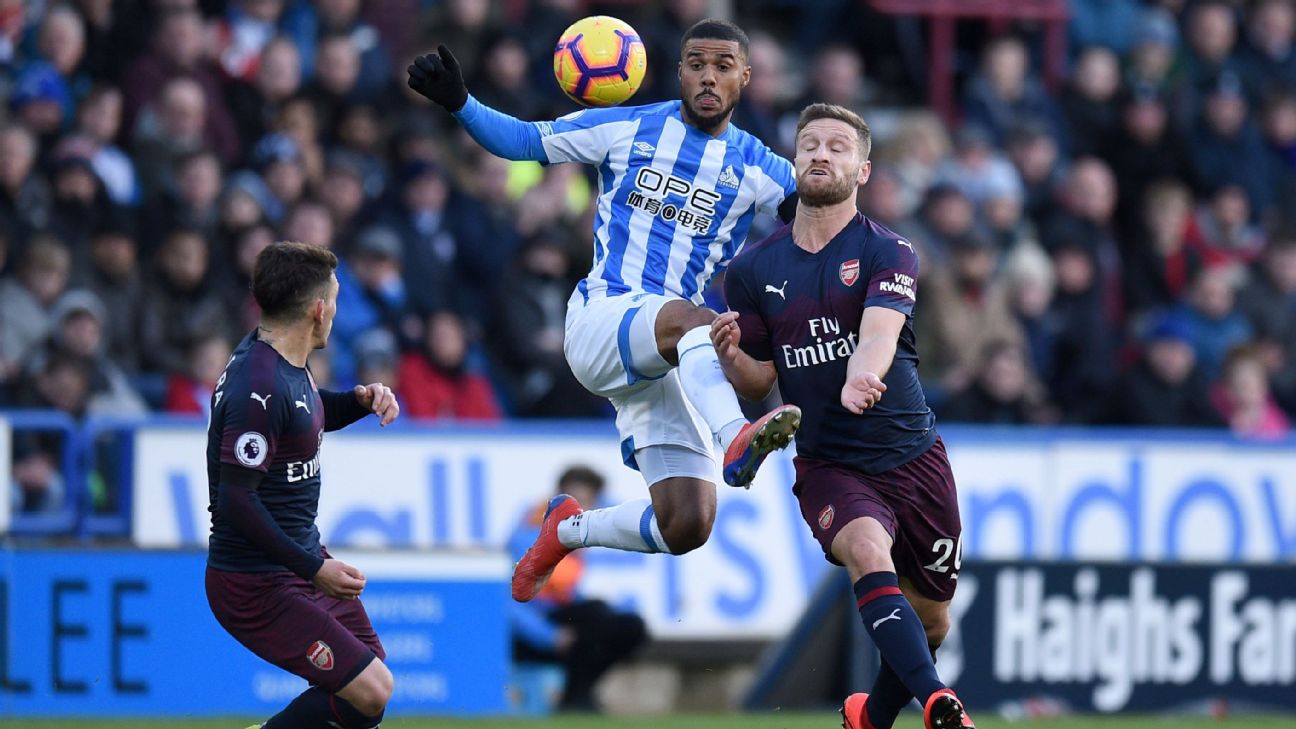 Arsenal survived a late scare as they beat struggling Huddersfield 2-1. A deflected strike from Alex Iwobi and a tap-in for Alexandre Lacazette were ultimately enough to secure them a valuable victory on the road.

Given the players absent through injury and illness, Emery will be relieved to take the three points. The likes of Hector Bellerin, Rob Holding, Aaron Ramsey, Granit Xhaka and Sokratis Papastathopolous would all surely have been involved had they been available.

Emery will also have been delighted to see Henrikh Mkhitaryan return from injury. His creativity has been much missed in recent weeks.

This performance wasn’t particularly easy on the eye. Arsenal mainly played on the break and never really had any control of the game. In that respect, they really missed Xhaka.

It will be particularly infuriating for Emery to have conceded a late goal. Arsenal are now the only Premier League team still looking for a first clean sheet of the season away from home.

6 — Ultimately, Arsenal got what they needed: the win. However, there are many fans questioning Emery’s strategy. His decision to let Huddersfield have possession and hit them on the counter-attack may have been deliberate, but his angsty gesticulation on the touchline suggests otherwise.

GK Bernd Leno, 7 — The keeper will be gutted to have conceded a late goal to make the final minutes more nervous than they should have been.

DF Ainsley Maitland-Niles, 6 — With Hector Bellerin out injured, Maitland-Niles has been handed the opportunity to stake his claim as Arsenal’s right-sided defensive player. In this game, he played as a wing-back on the right and got forward to good effect, creating the second goal for Lacazette. He can be a little careless in possession, but this was an improved outing for the academy product.

DF Shkodran Mustafi, 5 — On his 100th Arsenal appearance, Mustafi did not have a particularly good day. He was very sloppy in the first half, with his control letting him down on more than one occasion. He looks like a player really struggling for confidence.

DF Laurent Koscielny, 8 — Playing in the centre of Arsenal’s back three, Koscielny was Arsenal’s best defender on the day just as he has been for much of the past decade. His positional sense and defensive instincts are as sharp as they ever were. However, he was fortunate not to concede a penalty for a handball inside the box.

DF Nacho Monreal, 6 — Due to the fact that Sead Kolasinac is not the best defender, it makes sense to install Monreal as a left-sided centre-half behind him. However, he does look like a player who is physically on the wane. He did make one handy goal-line clearance.

DF Sead Kolasinac, 6 — Arsenal’s left wingback has become their most reliable creative outlet. It was his well-weighted cross that found Iwobi for the deflected owner and he continued to be very effective on the counter-attack. However, he stabbed home the Huddersfield goal in bizarre fashion.

MF Lucas Torreira, 6 — The Uruguayan had a fantastic start to his Arsenal career but has faded somewhat in the winter months. With Arsenal struggling to control the middle of the park, Emery decided to replace him with Mohamed Elneny.

MF Matteo Guendouzi, 7 — After an outstanding performance against Manchester City, Guendouzi appears to have grown in stature and confidence. His passing is becoming increasingly ambitious and his willingness to take the ball under pressure gives Arsenal a vital outlet to escape the press.

MF Henrikh Mkhitaryan, 7 — A good come-back for the Armenian. Sharing the creative responsibility with Iwobi, he found numerous dangerous pockets of space in the final third.

MF Alex Iwobi, 7 — The Nigerian international has been criticised for lacking end product, so he’ll be delighted to have netted the opener even if via a deflection. He might have another in the first half, finishing emphatically only to be denied by an offside flag. The inconsistency in his finishing was apparent when he went clear in the second half but fired straight at the goalkeeper.

FW Alexandre Lacazette, 7 — Without his pal Aubameyang alongside him, the pressure was on Lacazette to deliver for Arsenal. He tapped home the second goal and fought commendably against the Huddersfield centre-halves.

MF Mohamed Elneny, 6 — Came on for Torreira (59) and unfortunately his first contribution was to prevent Lacazette meeting a cross with a flying header of his own.