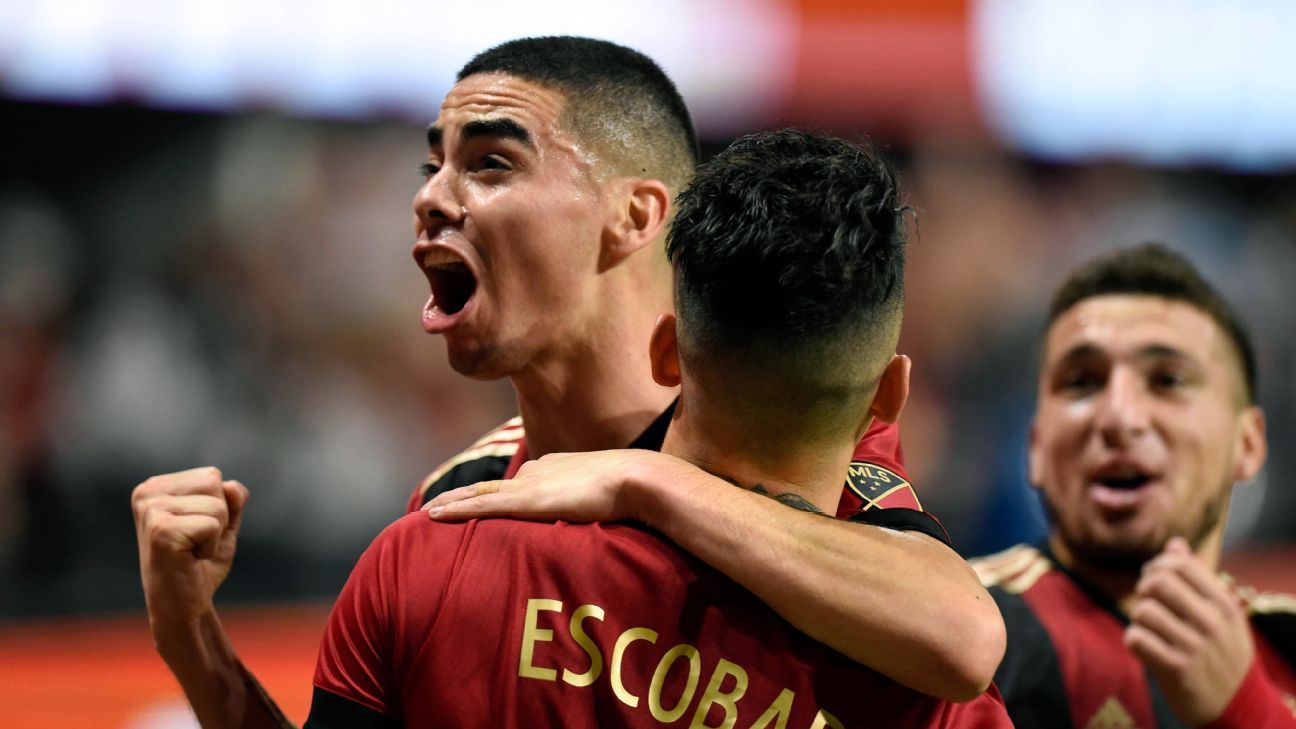 ASUNCION, Paraguay — The crumbling stands, patches of red-colored soil under the goal posts and tufts of dense grass down the flanks of the field at Club 3 de Noviembre’s stadium in the San Pablo barrio of Asuncion offer a reminder of the humble beginnings of Atlanta United’s Miguel Almiron, as well as how far the Paraguayan’s career has come.

On Saturday, there will be none of the kinds of hardships Almiron faced at his first club in Mercedes-Benz Stadium. The 24-year-old will step out to represent Atlanta United in the MLS Cup against Portland Timbers in front of a packed house, bright lights, an orchestrated pregame show and a perfect pitch.

Back in the family home, still in the same working class San Pablo neighborhood, the poignancy of the MLS Cup and what it represents in terms of Almiron’s rise hasn’t been lost on those who saw him juggle grapefruits in the backyard and constantly wear out his shoes due to his penchant for kicking rocks or anything else vaguely round.

“Not in any moment did we imagine that he was going to make the impact that he is now,” said father Ruben Almiron, who has made a single trip to the United States to watch his son play for the Five Stripes and says it is like “another planet.”

“When he was 10 or 11, we dreamed about him making the first division in Paraguay.”

Saturday is a a big game in his son’s career. A total of 20 people were at the Almiron residence as Atlanta United sealed its passage into the MLS Cup against New York Red Bulls and naturally, a few more will be expected for the final.

It’s also possibly Almiron’s last game for Atlanta, something the family acknowledges. The subtext is that English clubs like Arsenal, Tottenham Hotspur, West Ham United and Newcastle United are reportedly monitoring the attacking midfielder and there is some debate in the house about which of the two North London giants would be best suited to Almiron’s skill set.

The truth is that it would be surprising if teams from all of Europe’s top leagues weren’t looking on given that Almiron has 13 goals and 15 assists over 36 games this year for Atlanta and is in contention with his good friend and teammate Josef Martinez, Zlatan Ibrahimovic, Wayne Rooney and Carlos Vela for the Landon Donovan MLS Most Valuable Player award. On top of that, his shirt has been the fifth highest seller in MLS this year, with more Almiron jerseys sold than those of Bastian Schweinsteiger, David Villa, Sebastian Giovinco and Clint Dempsey.

Almiron’s dream is to play in Europe and a move almost came off when he was at Lanus in Argentina until the club increased the price, giving Gerardo “Tata” Martino the opportunity to directly call the player and sell the club to him towards the end of 2016.

Father Ruben moved with Miguel to Argentina when he signed for Lanus from his first club, Cerro Porteno, and says his son talks over his career decisions with the family. Uncle Diego even says he hasn’t yet been to Atlanta because he’s waiting to see Miguel in Europe. But all of them stress that they have no knowledge of firm offers at present and are adamant that it all depends on a bid coming in that is acceptable to Atlanta United.

The jovial family — the majority were proudly dressed in Atlanta gear when ESPN FC visited the house recently — are naturally delighted and proud of Miguel but the journey to the MLS Cup hasn’t been easy for him or them.

As a seven-year-old, Almiron was taken to the 3 de Noviembre football club because he was so quiet.

“He was very timid so I took him [to the club] so he would have other friends,” explained Ruben. “He quickly started doing well and made a lot of friends and inside a few months was demonstrating some ability.”

Talk to people around San Pablo, which was previously named after former Paraguayan president Alfredo Stroessner, and a picture emerges of Almiron as a smart, obedient, grounded and mature child for his age but more than anything, he was quiet.

“Yes, [he did his homework]. He was very quiet, he wasn’t one of those lazy kids,” remembered elementary school teacher Maria del Pilar Bernal, who taught Almiron in second grade and beams with pride when she sees him on TV. “He wasn’t naughty or restless; he was quiet.”

Almiron’s primary school, Escuela Basica No. 300, is literally across the road from the 3 de Noviembre field, with his first house and secondary school just a short walk away down cobbled, pot-hole filled streets in the traditional Asuncion neighborhood. The family — grandfather, mother, father, uncle and sister — still live in the same area though instead of renting and struggling to get by, they now live in a house Almiron bought when he signed from Cerro Porteno to Argentine club Lanus in 2015.

“I used to say to him ‘Look Miguel, how do you live?’ And he’d tell me that [his family] rented and moved regularly,” recounted Hernan Acuna, Almiron’s former coach at Cerro Porteno. “I said to him’ One day when you become a professional and get your first big paycheck, buy a house for your parents and after that buy what you want.’

“That’s what he did and when he got it, he called me and said ‘Coach, I’ve bought my parents a house.'”

Unlike most of the Paraguayan population, father Ruben only knows basic Guarani, partially a result of him being brought up and living 22 years in Argentina, where Paraguayans numbered half a million in 2010 and have tended to go to seek employment, at least before the current Argentine economic crisis. Once back in Paraguay and with a young family to support, Olimpia fan Ruben worked as a security guard — “12 to 18 hours [per day] and sometimes 24 hours at the weekend” — and his mother Sonia in a supermarket. The house was crammed; uncle Diego and Almiron’s grandad “Chelo” filled in to take the aspiring professional Miguel to training when required.

After Miguel was rejected by Nacional at the age of 14, it was Diego and his mother Sonia who took him to Cerro Porteno to try out through one of Diego’s contacts.

“We took him with his mother to a try-out where there were 300 boys and I’ll never forget it because he was number 301 in the squad,” remembers uncle Diego with a smile. “And then the guy I took him to [Cerro Porteno] with said, ‘Look after him, because he’s great’ and he responded ‘look, here I have 301 great players,’ indicating that all were equal for him.”

Almiron caught the scouts’ eyes but didn’t initially excel at Cerro, the Asuncion-based team he supports along with his mother and grandfather. The photos and memorabilia of Almiron in the family’s dining room and living room almost cover the entirety of the walls in the house along with those of sister Alma, who competes at swimming events. They also highlight just how skinny Miguel was growing up, which was seen as a problem by some coaches who understood the physical and direct nature of soccer in Paraguay.

Ahead of the 2011 U-17 season, Almiron had been told he would be cut from Cerro Porteno according to Acuna, who stepped in to vouch for the player at a critical moment.

“I’d watched Miguel play in training because he didn’t play [often in games],” said Acuna in an interview at his house. “He was signed into the U-15s at Cerro but didn’t play, not even in the U-16s.

“In November 2010, when the players were getting dropped from the squads, Miguel was among those names [on the list] to be cut… So I went to the coordinator and told him: ‘I don’t want that boy to leave.'”

Currently the youth teams coordinator at Fernando de la Mora, Acuna was at that time the U-17 coach at Cerro Porteno and later the youth system coordinator during a period in which Oscar Romero, Junior Alonso, Danilo Ortiz, Diego Godoy all broke through. Educated, straight-talking and clearly obsessed with soccer, Acuna gave Almiron six games to prove himself at the start of 2011. Crucially, Acuna switched up the formation to fit Almiron’s profile, using an enganche (deep-lying playmaker) to break the 4-4-2 mold Almiron didn’t seem to fit. But Acuna stressed to Almiron that in modern football, a creative playmaker still had to work hard when not in possession and couldn’t be a luxury player.

When he first saw Almiron, Acuna says he was immediately captivated by his speed over short distances and the technique he showed with his left foot but highlights that when he arrived at Cerro, the youngster needed to work on his right foot and heading ability. Off the field, Almiron showed a sound mentality.

“He’s very noble, a good teammate, he never gets into fights, he is very obedient,” said Acuna. “I spoke to him a lot and he told me about his family, people who have sacrificed a lot. I think his father was in Argentina for a time, then they came here, I know that they moved around renting houses, for example.”

Seeing Almiron succeed in Atlanta and talking about his path is clearly a source of pride for the coach.

“We get paid, we receive money for the work we do in the formation of players, but I always say that it is nothing in comparison to when you are recognized for something,” said Acuna. “What does it bring me? It renews my ideals and my drive, my will to keep on teaching others.”

On Saturday, Acuna, the Almiron family and Paraguay will be watching Almiron, who is becoming an increasingly important figure as the national team undergoes a generational shift under Juan Carlos Osorio.

Back in San Pablo, Almiron used to cry if 3 de Noviembre lost important games. But whatever Atlanta’s result against Portland Timbers, the family and barrio will welcome him back with open arms and have their fingers crossed that off the back of a successful MLS Cup, a move to Europe won’t be too far away.