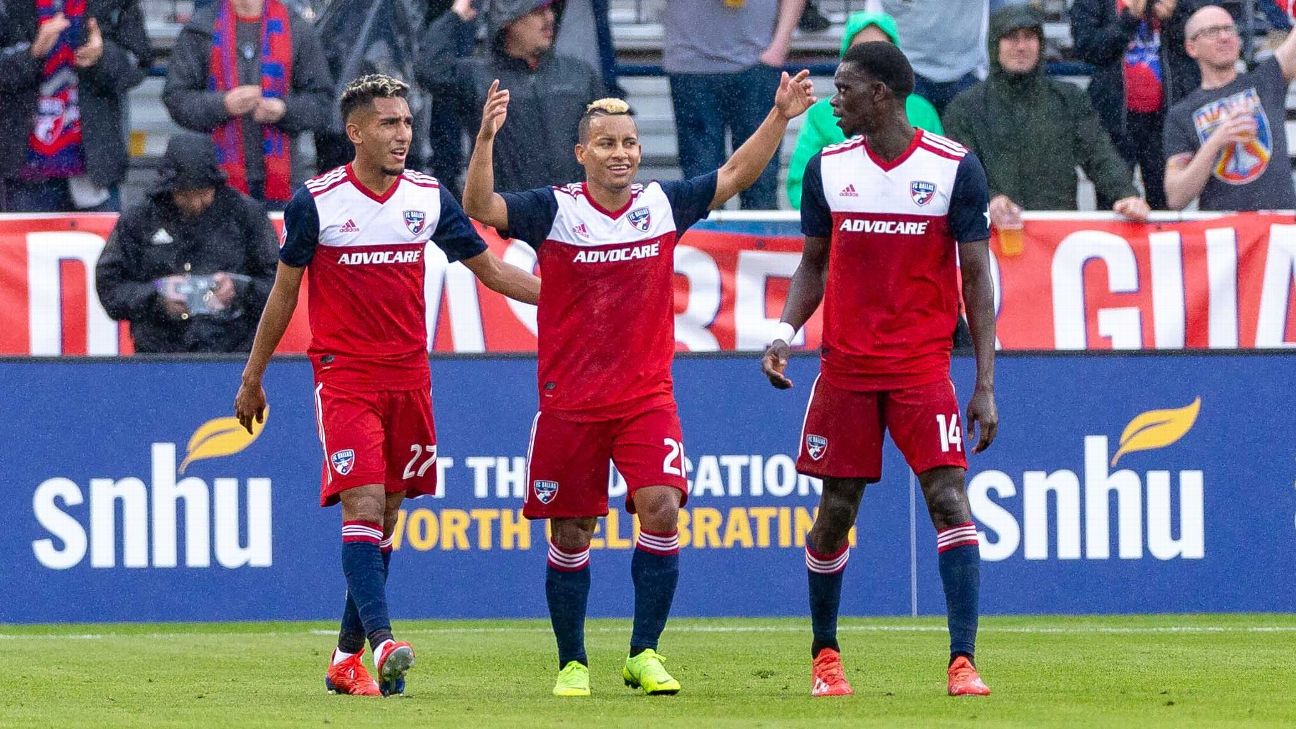 The international break reduced activity around MLS to a handful of games. Regardless, there were plenty of viable candidates who emerged throughout the league as the Latino of the Week. Here are the players who stood out the most this past weekend:

The Colombian-born playmaker was key in his team’s victory on Saturday, scoring the opening goal and popping up all over the final third. Barrios started the match on the right flank in support of Jesus Ferreira, who was put in as the team’s striker in a 4-3-3. Barrios was unquestionably the team’s veteran presence, leading a midfield that averaged 19.7 years in age.

Throughout the match, Barrios was involved in dangerous attacking buildup, creating spaces for his partners and moving freely toward the middle or even switching sides in order to befuddle defenders. The strategy was effective, creating matchup problems for Colorado defense.

Barely four minutes into the game, Barrios created a dangerous chance for Dallas by passing into Ferreira, who shot the ball off the crossbar. A half hour later, with Barrios now on the left side, the Colombian took a pass and cut back inside, shooting with his right foot past Tim Howard to open the game’s scoring with a thundering attempt.

In Philadelphia’s 3-0 thrashing of Columbus, the Brazilian-born Ilsinho scored to help guide the Union to victory despite a depleted first-choice roster thanks to the international break.

After David Accam had scored twice to put the Union ahead, Ilsinho drove the final stake into the Crew’s hearts just three minutes into the second half. After a loose ball found its way to the Brazilian, the Union playmaker struck it home with authority to put the game beyond reach and quell any thoughts of a Columbus comeback.

Ilsinho was just one of several Latinos who keyed the Philly victory: goalkeeper Carlos Miguel Coronel was a big factor in goal, while Alejandro Bedoya, he of Colombian roots, commanded the midfield during the game’s entirety.

After scoring, Ilsinho stayed on until the 75th minute before coming off for Olivier Mbaissidira to the acclaim of Union fans.

The Mexican-American goalkeeper was once again a factor in FC Dallas’ success, despite not being able to keep his clean sheet in the 2-1 win over the Colorado Rapids.

In a tense game, Gonzalez saved his team on more than occasion, giving us one of the saves of the week when he stopped Andre Shinyashiki‘s shot from close range.

This season, Gonzalez has allowed just three goals in four games, allowing FC Dallas to rack up early points in what figures to be a tight Western Conference playoff race. Through four matches, Dallas has won twice, drawn once and lost once, and currently sit fourth in the West on seven points.

Unfortunately for the Argentine defender, Philadelphia’s 3-0 win was not all the product of fantastic offensive play, but rather facilitated by some gaffes in the back from the former Boca Juniors man.

Sauro was beaten badly for two of the game’s three goals, failing to run out on the first goal, when David Accam placed a soft shot just inside the post. Sauro was only a few feet away and could have potentially cleared his lines.

Later, Sauro was exposed once more when Accam took a pass just inside the box and muscled his way past the defender. After Accam cut in, Sauro fell flat on his back while the Union forward shimmied his way toward his second goal of the contest.

Finally, Sauro was complicit in the game’s final goal as well. The Brazilian Ilsinho was a hair faster than the Argentine after a scramble left the ball just a few feet from the Crew goal. Ilsinho shot past Sauro and into the net to make the game 3-0. After a fantastic defensive start in which the team allowed just one goal in its first three games, Crew fans will hope this was an off day from one of the leaders of their back line.