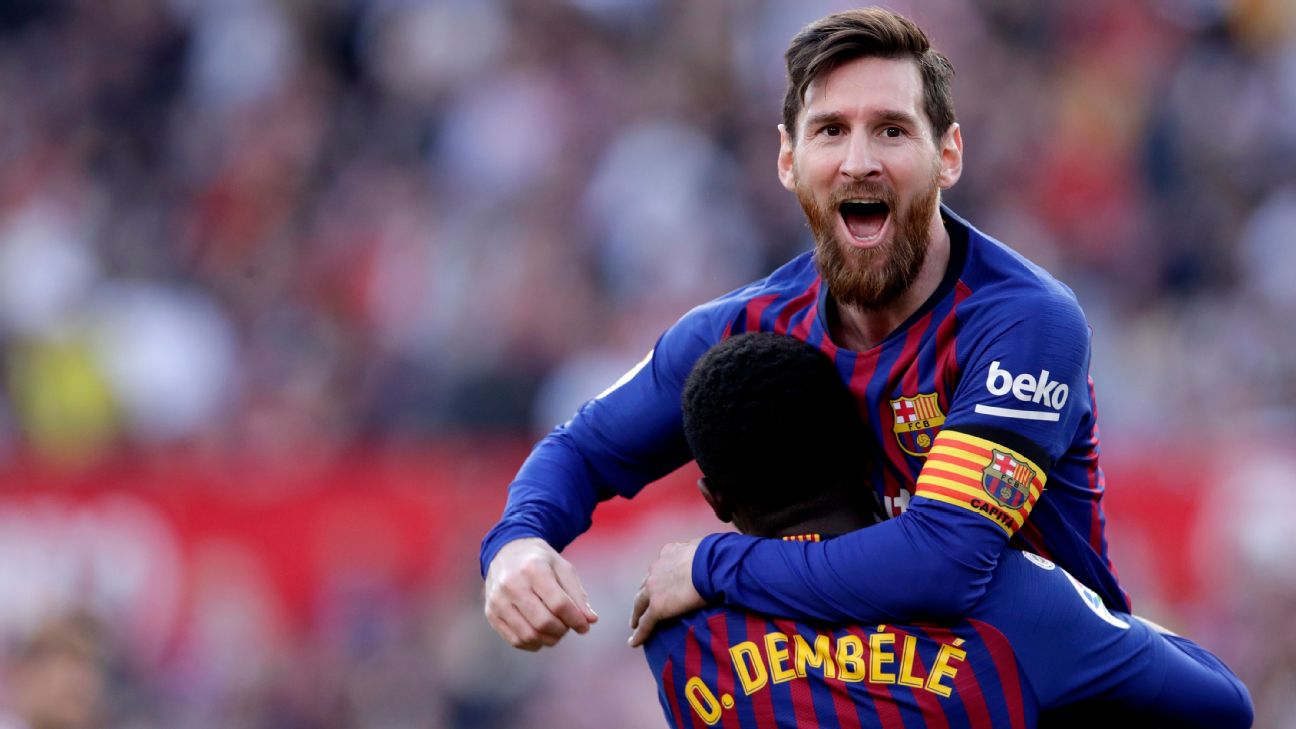 Lionel Messi scored his 50th career hat trick as Barcelona twice came from behind to beat Sevilla 4-2 at the Sanchez Pizjuan on Saturday.

Jesus Navas gave Sevilla an early lead, but Messi levelled things up with a brilliant volley. The hosts moved back ahead before the break through Gabriel Mercado before Barca, led by Messi, improved in the second half.

The Argentine curled home an Ousmane Dembele pass with his right foot to equalise for the second time. He then stole the three points late on with a cheeky chipped finish from close range before setting up Luis Suarez for Barca’s fourth in stoppage time.

Messi started slowly as doubts continued about his fitness following a recent thigh injury. But, after giving the ball away for Sevilla’s first goal, he blew those doubts away with a match-winning performance. This was his 50th career treble and he has now scored 25 league goals this season. It looks like he’s found his form just in time for this week’s doubleheader against Real Madrid.

Coach Ernesto Valverde also deserves credit for his proactive changes at half-time, while Ivan Rakitic and substitutes Dembele and Carles Alena also had a positive impact on the game.

It’s going to be very difficult for Barca to throw the league away from here. They’ve played a game more for now, but they are 10 points clear of nearest rivals Atletico Madrid with 13 games to be played.

Barca’s first-half performance was nowhere near what is expected of them. In that sense, it was a continuation of their recent hot and cold run: four draws and one win in their last five games before Saturday’s win in Seville.

The defending was particularly lacklustre for the two goals. They have improved at the back since December, but this was a throwback to their leaky showings earlier in the season.

Manager Rating out of 10

7 — Valverde swung the game in his side’s favor with half-time substitutes and a formation switch to 4-2-3-1.

Player ratings (1-10; 10=best. Players introduced after 70 minutes get no rating)

GK Marc-Andre ter Stegen, 6 — A poor clearance led to Sevilla’s second goal but he could do little to stop either Navas’ or Mercado’s strikes.

DF Nelson Semedo, 6 — Didn’t do a lot wrong but was removed at the break with Barca chasing the game.

DF Gerard Pique, 6 — Was given a tough time by Wissam Ben Yedder in the first half and was deservedly booked. Showed his experience to offer an improved second-half showing.

DF Samuel Umtiti, 6 — Struggled at times on his return from a knee injury as he made his first appearance since November. Wasn’t at fault for either of the goals, though, and should hugely benefit from coming from 90 minutes.

DF Jordi Alba, 6 — Not his finest performance in what may be his finest season since he moved to Camp Nou. Both the Sevilla goals came from his side — even if he wasn’t directly to blame on either occasion.

MF Sergio Busquets, 6 — Slack for Sevilla’s second goal but looked more comfortable in the second period with the change of formation.

MF Arturo Vidal, 5 — Like Semedo, sacrificed at half-time. Cut out a lot of dangerous Sevilla attacks but Valverde will have wanted him to be more precise in the final third.

MF Ivan Rakitic, 8 — Set up Messi’s goal with a sweet cross in the first half but produced his best football after the break. Valverde switched to a 4-2-3-1 formation and the Croatian’s built for a role in that midfield two. Was also involved in the second goal.

FW Lionel Messi, 10 — Turned it on after a recent dip in form. Partly to blame for the first goal but completely responsible for Barca’s win. Scored three really good goals and set up the fourth.

FW Luis Suarez, 6 — A better performance than his last two, ending his five-game goal drought with a nice lob in stoppage time.

FW Philippe Coutinho, 5 — Didn’t offer enough once again before being taken off in the second half. It’s been the same story too often in the last few months. On this evidence, he’s unlikely to start against Real Madrid in the cup on Wednesday.

FW Ousmane Dembele, 7 — Missed a great chance but added the spark Barca were missing as a half-time substitute. Set up Messi’s second and caused problems with his pace.

DF Sergi Roberto, 6 — Came on for the second half and was part of an improved Barcelona performance.

MF Carles Alena, NR — Only came on for the final 10 minutes but made an impact. It was his blocked shot which led to Messi’s third goal.