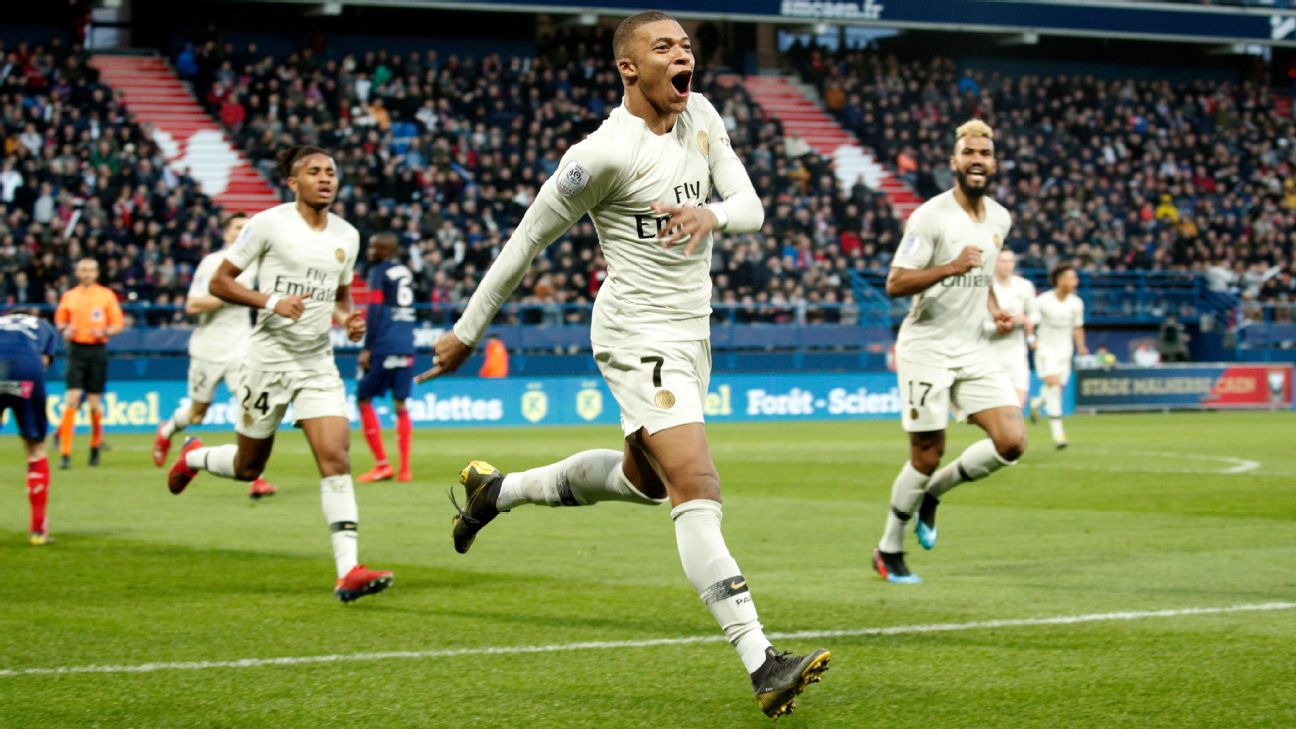 Paris Saint-Germain opened up a 20-point lead at the top of the table as their record Ligue 1 form continued with a 2-1 win away at Caen thanks to two Kylian Mbappe goals at Stade Michel d’Ornano on Saturday.

A win is a win, particularly an uneventful one so close to a massive Champions League match against Manchester United at the Parc des Princes. Thomas Tuchel will be relieved that his squad made it through the game unscathed, particularly with Edinson Cavani still a doubt ahead of Wednesday’s date with United.

Otherwise, Mbappe was the obvious plus with two more goals to take his Ligue 1 tally to 24, including his first penalty of the campaign.

Apart from the fact that it was not the cleanest of wins, Tuchel will have had little to moan about with regards to the way his team handled themselves in Normandy.

6 — Tuchel rotated his squad again and although it required a late goal, his starting XI and substitutions ultimately produced three more points as the Ligue 1 title moves ever closer.

GK Alphonse Areola, 5 — There was not much that he could do to keep out Casimir Ninga’s opener and otherwise had little to do.

DF Thomas Meunier, 6 — A solid outing, which could have seen him score at the end, but it was his blocked shot that Mbappe turned in for the winning goal.

DF Marquinhos (c), 7 — As skipper, he needs to exercise greater command over the defence to avoid goals like Ninga’s from set pieces, but otherwise he was convincing.

DF Thilo Kehrer, 6 — Paired reasonably well with Marquinhos at the back and would probably have a clean sheet effort if Dani Alves had not been caught out.

DF Layvin Kurzawa, 6 — Another 90-minute outing moves him closer to being able to challenge Juan Bernat for a role in Tuchel’s favoured starting XI.

MF Christopher Nkunku, 5 — Not his finest showing, but his increased involvement is proof of his continued turnaround in fortunes since the start of 2019.

MF Dani Alves, 5 — Booked and at fault for Caen’s goal, he should have left it to Marquinhos to organise the defence and he might not have been caught out.

MF Leandro Paredes, 6 — With 90 more minutes under his belt, he continues to emerge as a serious candidate to play against United.

MF Moussa Diaby, 6 — It was a decent 70-minute performance, but he needs greater penetration if he is to break into the starting XI more regularly.

FW Angel Di Maria, 6 — On a day when PSG hit the woodwork multiple times, he was particularly prominent as PSG peppered their hosts’ goal.

FW Kylian Mbappe, 7 — Two more goals, including his first penalty of the season, as he continues to establish himself as the team’s talisman without Neymar and Cavani.

MF Julian Draxler, 6 — Given the final 26 minutes, he helped to inspire the late push that produced Mbappe’s winner.

MF Juan Bernat, NR — Got 20 minutes in towards the end and is likely to be restored to the starting XI against United.

FW Eric-Maxim Choupo-Moting, NR — Gave PSG a focal point in attack for the final quarter of an hour, which freed Mbappe up to snatch his winning goal.