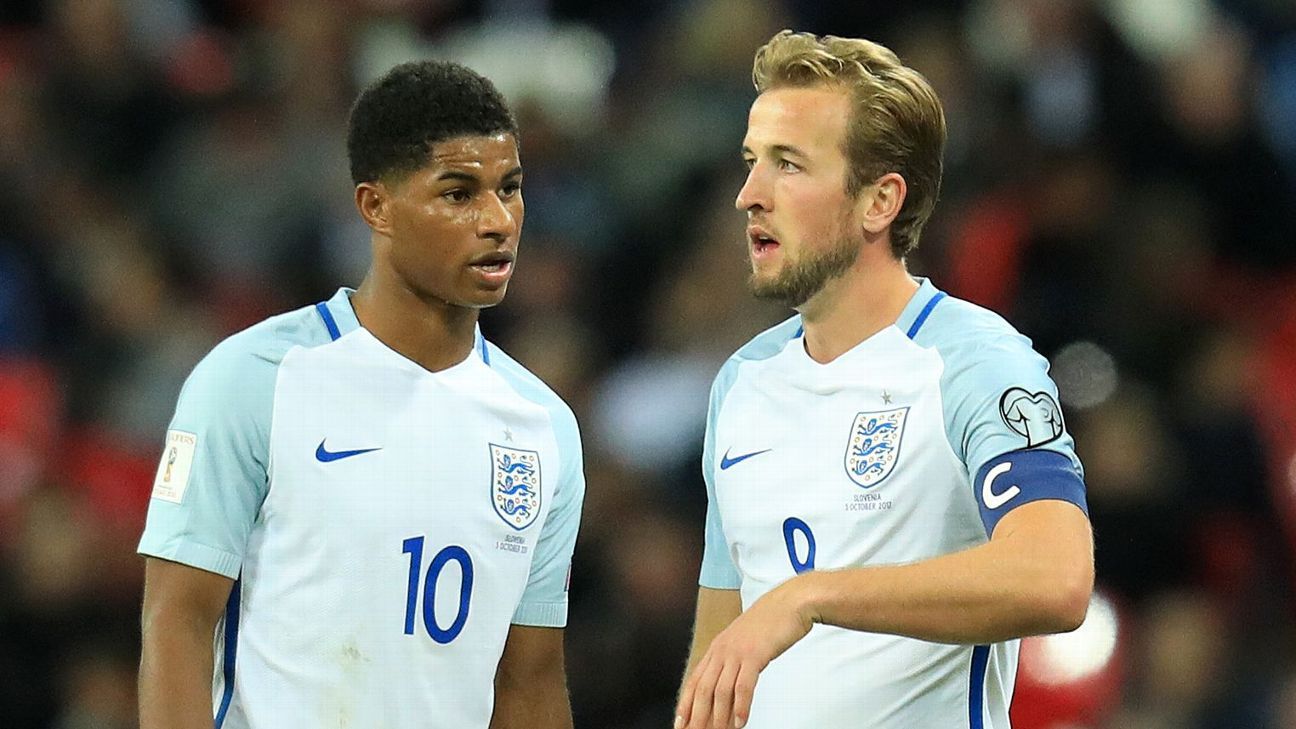 Once upon a time, English football used to develop a particular type of striker. He was big, tall, strong and a perfect target for long balls and crosses.

Look through England squads at major international tournaments over the past 15 years and you’ll find Peter Crouch (2006), Emile Heskey (2010) and Andy Carroll (2012). In 2014, there was Rickie Lambert, who actually specialised at linking play from deep, but by virtue of coming from the lower leagues, he was automatically considered a target man — the type of centre-forward England unmistakably required somewhere in their armoury.

Then, suddenly, something changed. Between World Cup 2014 and Euro 2016, England discovered their best crop of centre-forwards in decades and arrived in France with Harry Kane, who had just won the Premier League Golden Boot; Jamie Vardy, who had finished one goal behind and had won the Premier League; and Marcus Rashford, who was suddenly a Manchester United regular having made his league debut only four months beforehand. At World Cup 2014, these weren’t even remotely options: They had three Premier League goals between them.

You can’t call this trio a “generation” — Vardy was born in 1987, Kane in 1993 and Rashford 1997 — but that discovery of class up front was the catalyst for England’s improvement over the next couple of years, even if it was at World Cup 2018, rather than Euro 2016, where it proved effective. Vardy is now retired from internationals, but Kane and Rashford look set to dominate England’s future. They face one another this weekend at the national stadium, as Kane’s Tottenham face Rashford’s Manchester United.

Kane and Rashford aren’t traditional English centre-forwards who thrive on crosses — both wear No. 10 rather than No. 9, incidentally — but they’re also very different from one another.

Kane was initially considered a pure goal-poacher — generally because no one could entirely deduce what he excelled at — but Kane played as a No. 10 throughout his teenage years and likes coming short to link play. His performances over the past 18 months, in particular, have been defined by his selfless contributions in deeper positions, rather than his penalty box prowess.

That was evident at the World Cup, where, somewhat paradoxically, Kane won the Golden Boot yet contributed chiefly in terms of bringing defenders up the pitch to create space for the onrushing Raheem Sterling.

We’ve witnessed this type of movement regularly for Tottenham this season, and Kane has started to excel at a very particular type of pass — coming short toward the ball and immediately whipping a first-time pass “around the corner” with his right foot for a runner down the right flank. It’s the pass Francesco Totti used to specialise in. Who thought that would be an obvious comparison when Kane first broke through?

Rashford’s all-round game is also impressive, but in a different manner. He has often been deployed out wide for Manchester United because he boasts the speed and directness to cause problems in open spaces. There remains a suggestion that he requires a central role to thrive, but the major benefit to his positioning through the middle, ironically, is that he can drift out wide to both flanks. Rashford’s link play is decent enough, but it’s his movement, acceleration and timing of his runs that really kills opponents.

That was obvious during Manchester United’s recent 4-1 home victory against Bournemouth, when the prematch focus was upon Rashford being deployed through the middle, yet within the opening 10 minutes, he’d drifted wide to the right before using first his speed, and then an extravagant “elastico” move to beat two defenders and cross for Paul Pogba to score. It’s also worth recalling an assist for Ander Herrera’s flicked finish away at Southampton last month: another burst down the right and another measured low ball.

Although Rashford is clearly right-footed and specialises in striking across the ball to get reverse movement on shots (see his free-kick opener at Cardiff or the delivery that resulted in Romelu Lukaku’s goal at Newcastle last week), he’s comfortable shooting with his left.

Kane also boasts an impressive level of ambidexterity. His powerful, long-range opener against Wolves was particularly striking because Kane hammered it into the top corner with his supposedly weaker foot. That was his second straight goal on his left side, following his volley against Bournemouth, in which he watched Christian Eriksen’s chip perfectly over his left shoulder onto his boot.

Kane completes the set because he offers that old-fashioned English headed threat, too. He has scored more headers this season than Rashford has in his career — including, incidentally, a well-judged looping effort to open the scoring in the reverse fixture. Rashford remains unconvincing in the air and notably missed two presentable chances against Newcastle a couple of months back when connecting with the ball somewhat awkwardly, suggesting he’s almost untrained in the air.

That would make sense. These days, it’s rare to see a centre-forward adept in the air at a young age; with academies increasingly focusing upon developing more technical skills, it’s a quality that comes later. That was the case when Wayne Rooney was shifted into a proper centre-forward position; or when Robin van Persie became a No. 9 rather than a No. 10; or, in more recent times, with Romelu Lukaku, who confessed that he simply didn’t like heading the ball in his early days at Everton but has recently offered more aerial power.

Maybe this seems counter-intuitive: These players are so exciting precisely because they’re technical rather than physical, and they encourage their teammates to play good combination football. But it has always been something of a myth that, to offer a threat in the air, you need to be big and strong. It’s equally about positioning, timing of runs and leaping at the right moment, and smaller strikers from Michael Owen to Javier Hernandez have proven effective at the technical side of heading. Rashford clearly has a physical advantage on both of those.

While they’re in battle this weekend, Kane and Rashford look set to be international teammates for years to come — and in the nearer future, for the UEFA Nations League final four in June. With Sterling a guaranteed starter, Gareth Southgate will look to deploy a front three — as he did for England’s fine 3-2 victory away at Spain in October — which means Rashford starting from wide and going in behind and Kane leading the line, dropping deep and feeding the other two.

England now have the most attacking options they’ve had for some time, while the technical and tactical ability of these players symbolises a shift away from the old-fashioned approach and a template for future English forwards to follow.