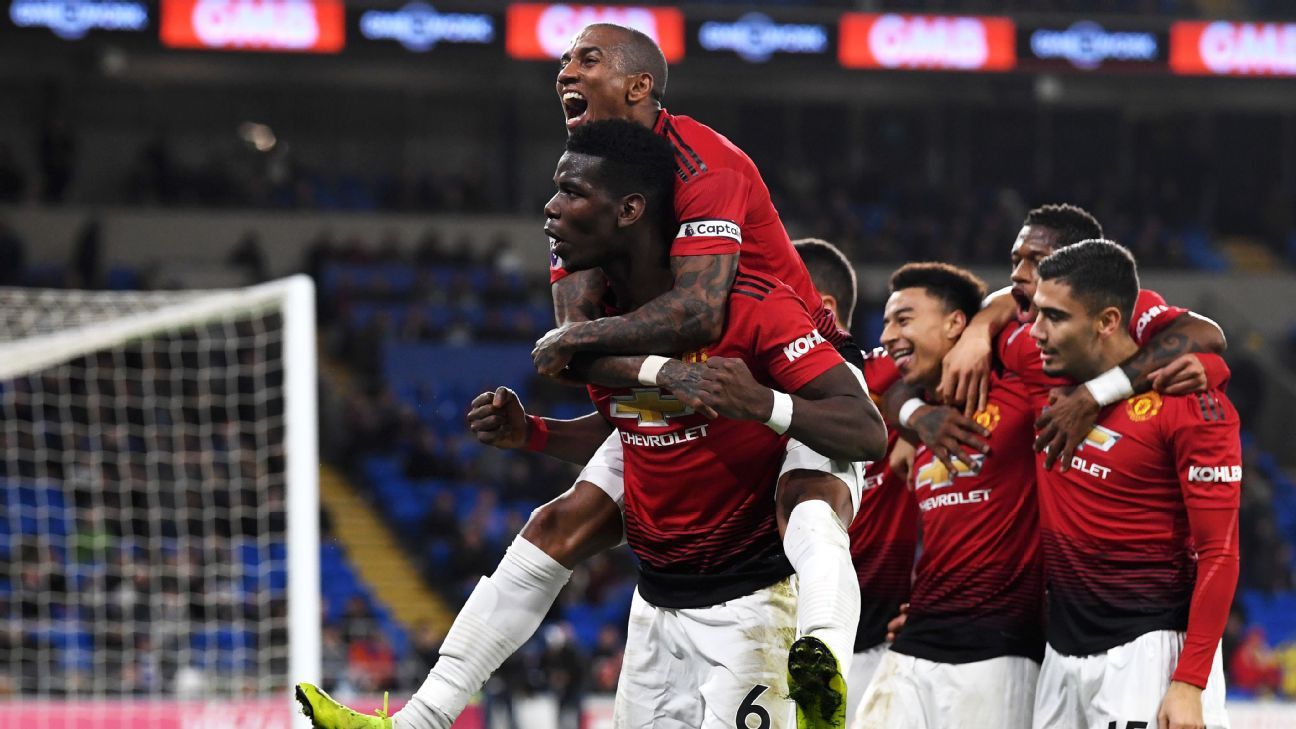 CARDIFF, Wales — The wave of optimism that has swept through Manchester United this week will carry on a little longer after Ole Gunnar Solskjaer’s reign began with a 5-1 win over Cardiff City.

The last United manager to start with a comprehensive win in south Wales was David Moyes after he oversaw a 4-1 win at Swansea in August 2013. Solskjaer will hope his spell is remembered more fondly after he replaced Jose Mourinho in the hot seat on Wednesday.

His tenure got off to the perfect start for the Norwegian famous for late goals when Marcus Rashford got an early one — after just three minutes — from a free kick. Ander Herrera and Anthony Martial both found the net before half-time and Jesse Lingard scored twice after the break to ensure United scored five in a Premier League game for the first time since Sir Alex Ferguson’s last match in charge more than five years ago.

United went in at half-time 3-1 up and Paul Pogba had a hand in all three goals. He was in a no-win situation here. Play well and he would be accused of turning it on the moment Mourinho left. Play poorly, and he would have run out of excuses because Mourinho was no longer the problem. Overall, United played with more freedom in Solskjaer’s first game and Pogba, in particular, seemed to enjoy it.

The only downside was that United failed to keep a clean sheet. Solskjaer wants his team to play attacking football, and that was on show here, but defending has been a problem all season and he will want to fix it. They have conceded 30 goals in 18 games and that’s too many. It will take time on the training pitch to sort it out and Solskjaer hasn’t had it.

Manager Rating out of 10

9 – He only had one training session to work with his players, but it is noticeable how much he wants them to stretch the game. Both full-backs stayed wide with centre-forward Marcus Rashford pushed on. It worked, as did his decision to bring back Paul Pogba, who was involved in the first three goals. Solskjaer couldn’t have asked for a better start.

Player ratings (1-10; 10=best. Players introduced after 70 minutes get no rating)

GK David De Gea, 7 — The Spaniard did not have too much to do as United dominated, but he did make one good save from Josh Murphy in the second half.

DF Ashley Young, 7 — Instructed to stay wide and get forward from right-back more so than under Mourinho. Delivery was as good as usual.

DF Luke Shaw, 7 — Took a smack from Callum Paterson while clearing a cross from under his own crossbar. Made one rash challenge and picked up a booking.

DF Victor Lindelof, 8 — One of the players to benefit from having more freedom. Came out of defence with the ball and put pressure on when Cardiff were in possession. Runs into midfield with the ball were impressive.

DF Phil Jones, 7 — Performance wasn’t as eye catching as Lindelof’s, but he defended well and might have scored with a snap shot that was saved by Neil Etheridge.

MF Nemanja Matic, 7 — Didn’t have many Cardiff attacks to break up as United kept hold of the ball, but was better with his passing and seemed to have more options whenever he looked up.

MF Ander Herrera, 7 — Goal took a deflection off Greg Cunningham, but it was still a fine strike to put United 2-0 up.

MF Paul Pogba, 8 — Straight back in the team after Mourinho’s dismissal and within five minutes had won the free kick from which Rashford scored. Also involved in the second with a good spot to find Herrera in space and in the intricate one-touch passing that set up Martial’s fine finish.

FW Jesse Lingard, 8 — Lovely cushioned pass into Martial’s path to allow the Frenchman to score the third before half-time. Won the penalty and tucked it away with confidence before getting his second late on.

FW Anthony Martial, 7 — Started and finished the aforementioned move that got United their third and killed any hope Cardiff had of staging a comeback. One of the most slick moves of the season.

FW Marcus Rashford, 7 — Free kick drilled into the corner after three minutes. Unlucky to give away Cardiff’s penalty after it looked like the ball came off his shoulder rather than his arm.

Andreas Pereira (for Anthony Martial, 86), NR — Very little to do, mostly a formality.

Marouane Fellaini (for Nemanja Matic, 86), NR — Same as Pereira, one wonders what his role will be under the new boss.