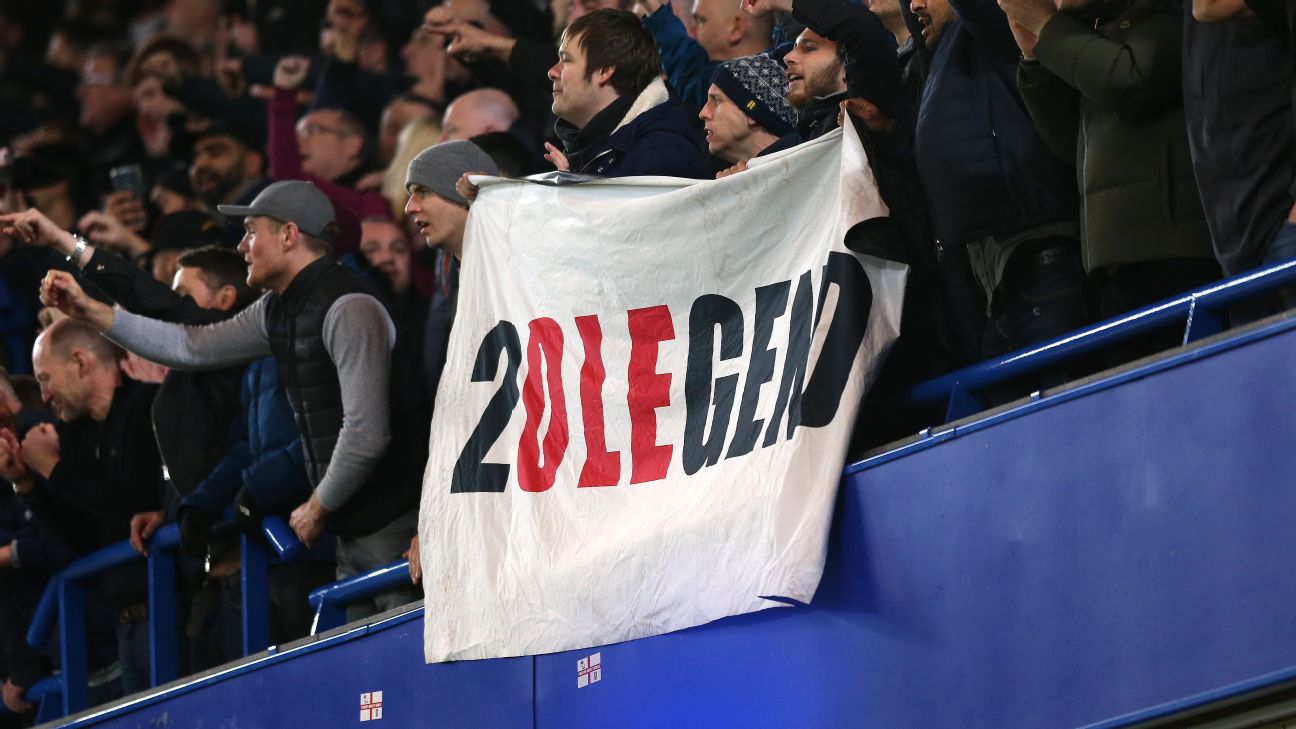 Chelsea away has long been a problem for Manchester United, if not Manchester United fans. Monday’s 2-0 FA Cup win was the first in 10 visits, and the atmosphere in the away end was praised by many, including Ole Gunnar Solskjaer who said: “It didn’t feel like an away game with all that support behind the goal.”

Michael Carrick added that: “To every single one of you behind the goal last night. Non-stop from start to finish. The noise and energy was incredible. Would have loved to be in there myself. Thank you. Same again Sunday please.”

The players often talk about the away fans rather than the home fans.

No song was aired more by the 6,000 split over two tiers than “Ole’s at the wheel, tell me how good does it feel” to The Stone Roses’ “Waterfall.” It’s the anthem for the United revival, sung on a loop. Those fans held up a huge flag in the middle of the upper tier stating: “Magic of the FA Cup? Sold by the FA for Monday night TV CA$H.” The sentiment was applauded by Chelsea fans.

Despite the Monday night scheduling, 200 miles from Manchester, 12,000 United fans applied for tickets. They created the same constantly loud sound that has accompanied the away wins at the other London giants Tottenham and Arsenal in recent weeks, but even if United hadn’t won their 12th game from the 14 under Solskjaer, it would have still been raucous at Stamford Bridge.

It always is in this wealthy area of west London, where football fans aren’t always a natural fit with the wine bars and bistros. When Jose Mourinho’s team were getting hammered 4-0 in October 2016, the 3,000 United fans just became louder and louder as the game went on. When United were defeated 5-4 in an epic League Cup game at Stamford Bridge in 2013, Ryan Giggs rated the atmosphere as one of the best in his entire United career.

United’s away games in London have long been susceptible to the tourist dollar diluting the hardcore travelling fans. So, the club are now working hard to make sure that tickets don’t end up on the black market for those who don’t deserve them when genuine fans are missing out. But there are other reasons why Chelsea away is always so noisy. The away end is steep, split over two tiers and right on top of the pitch. Chelsea are fair in their allocation for visiting fans, too. The other reason is that Manchester United’s away support is magnificent.

The 6,000 fans filtering through the body checks at the Bovril or Stamford gates for Monday’s FA Cup fifth round arrived late after the rush hour that went with the earlier-than-usual 7:30 p.m. kickoff. They knew that Chelsea had won all eight of their home cup games this season, but there was palpable optimism. Solskjaer is to thank for that.

From then on, they made some real noise and it didn’t stop. Stamford Bridge is all seated, yet I didn’t see a United fan sitting down for a minute. Chelsea’s yellow-vested stewards faced the visiting hordes and stood transfixed at so many people punching the air and singing. Their behaviour was good, there was no trouble. Stewards were thanked on the way out of the stadium before fans were ushered towards the melting pot of home and away fans on the Fulham Broadway, where the away coaches were lined up.

Yet, even as far bigger numbers of home fans mixed, songs from United fans prevailed. Local residents peered out the windows of their multi-million-pound houses at the commotion below of fans singing about Chelsea never having won the treble, about John Terry slipping or about Solskjaer.

Football fans aren’t shy to self-congratulate, but United fans aren’t better all the time. Four thousand Paris Saint-Germain fans completely outsang 70,000 United supporters at Old Trafford only last week. There is no shortage of excuses about why the Old Trafford atmosphere is poor, yet PSG fans didn’t seem to find it a problem. They were simply far noisier and better organised than Manchester United fans. They got in the ground earlier, they built up the atmosphere and every one of them sang. They were a different level.

For all the faults of United’s home support, faults the club and groups like The Red Army are trying to fix with enthusiasm, energy and ideas, the away following has always been a vast, disparate, loyal, united body. There’s a strong sense of community coming from people knowing each other, if only to say hello.

People help each other out with spare tickets. They need to. The away following would be far bigger if ticket allocations allowed for it. An average of 12,000 fans apply for tickets for every United away game, yet the typical Premier League allocation is just 3,000.

The FA Cup encourages bigger allocations, though Arsenal didn’t play ball. United were furious about that. United fans should get 15 percent of Molineux’s capacity for the sixth-round game at Wolves — 4,500. It’ll be another tough away game against a team who, like Tottenham and Arsenal, have already taken points at Old Trafford this season, but United are flying, their fans having too much fun to care about who their next opponents are.

On Monday, Chelsea fans jeered their manager. Those observations were relayed via journalists in the press box, situated behind both managers and surrounded by Chelsea fans. In the middle of the away end it was impossible to hear such dissent. The focus was on United, but having spoken to editors from Chelsea’s longtime fanzine CFCUK on Fulham Broadway before the game, they said that Chelsea fans at matches are generally not convinced by the Italian.

That’s Chelsea’s problem. United’s only managerial issue is whether to appoint Solskjaer full time, but he continues to do a superb job and it does him no harm when he walks up to the away fans and punches the air in front of them as did at Stamford Bridge after another victory, strengthening the strong connection between fans and the manager.

As I walked past the coaches on Monday night, supporter Sam Smart stood by the door of one of the two he’d organised. “Non-stop singing all night,” he said. “If only we could replicate that at Old Trafford.”

After seven consecutive away wins, which equalled the all-time club records set between April and August 1993 and March and April 2002, the mood among United’s travelling fans remains deliriously upbeat. It’s time to carry that to Old Trafford for Sunday’s huge game against Liverpool. Old Trafford has been nervier for recent games. The past two matches have seen a 2-2 draw against Burnley and the defeat to PSG.

United fans do not want Liverpool to win the league. Even Manchester City are preferable to Liverpool in the eyes of United fans. Liverpool have a very good side and fans who are up for it, so whatever happens on the pitch, it should be deafening in the stadium.