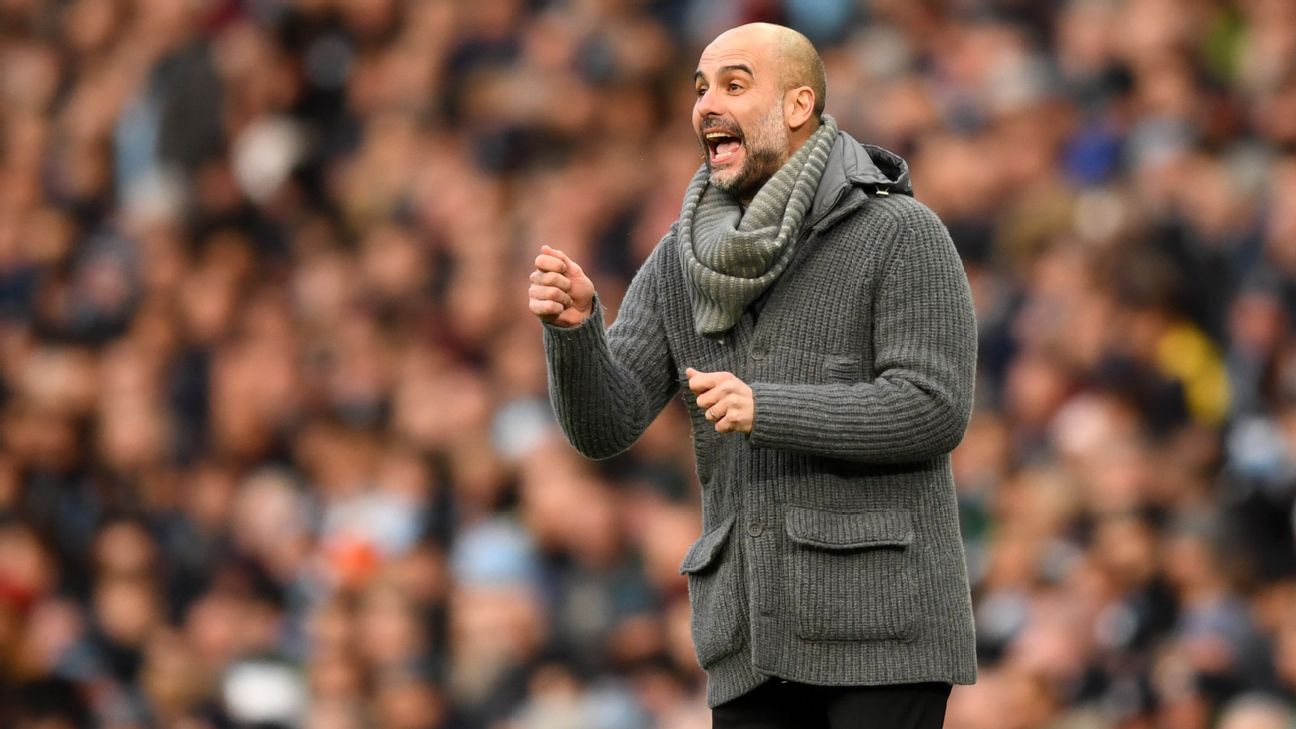 MANCHESTER, England — Pep Guardiola believes Manchester City are matching the hunger of his great Barcelona teams after moving back top of the Premier League.

City beat top-six rivals Chelsea 6-0 to leapfrog above Liverpool in a tricky week when they also beat Arsenal and won away at Everton.

Guardiola is aiming to become the first manager in more than a decade to win back-to-back Premier League titles and has challenged his side to replicate the desire of his old club that won three La Liga titles and two Champions Leagues during his time there.

“The desire to want to do the best is incredible and similar [to that at Barca],” Guardiola told a news conference.

“For us to get 100 points, break all records and continue to push them and push them, these guys work a lot. The only way I know is the more you win, the more you have to work.”

City face a crunch period, with the Champions League restarting on Feb. 20 against Schalke, the Carabao Cup final against Chelsea as well as their Premier League battle with Liverpool and Tottenham.

They have taken nine points from three difficult games to maintain the pressure on Liverpool, but Guardiola insisted they must be more consistent to hit their very best form.

“One week ago we played Newcastle, you remember?” Guardiola said. “One week ago, not two months or something like that. Football is better if you stay calm.

“It was tough and now it will be tougher. After three games in a week — Arsenal, especially Goodison Park and playing the way we played with this intensity and the desire and patience to find the right moment, the players were outstanding. I said thank you to them for what they have done.”

Sergio Aguero was one of the outstanding players as he scored his 11th Premier League hat trick during his time at City to draw level with Alan Shearer for most trebles in Premier League history.

The Argentinian could have even had more — hitting the crossbar and missing a golden opportunity from two yards early on that had his manager on his knees in frustration.

But Aguero more than made up for it, particularly with a stunning 25-yard opener, and the pair shared a joke when he was substituted midway through the second half.

“[I told him] nice goals. I think he got Alan Shearer’s record,” Guardiola said.

“He said to me he saw Kepa coming quick to close the space and he wanted to go close to the post and that’s why he missed it. I told him not to do it again, but I think reaction was a little better.”

Aguero is now the joint top scorer in the Premier League with Liverpool’s Mohamed Salah and quickly brushed off the miss.

“I don’t know [what happened] it sometimes happens but important to get the next one so I’m very happy,” the striker said.

“The important thing after that is to keep the ball but more important is to win.”