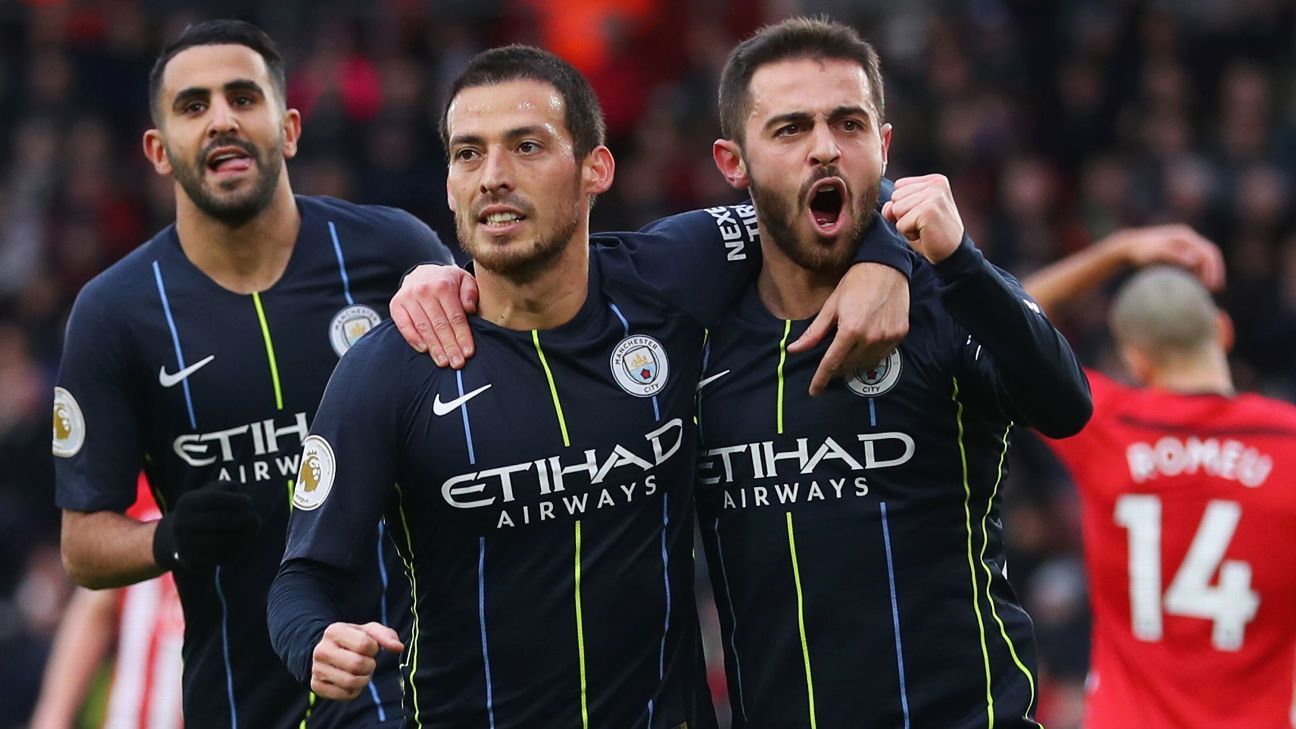 SOUTHAMPTON, England — Three points from St Mary’s on Man City’s 3-1 win over Southampton in the Premier League on Sunday.

1. City rediscover their identity, get back in the winner’s circle

The sign that Manchester City had rediscovered something like their best came in the 19th minute of this 3-1 win over Southampton. Ederson received the ball under pressure in his 6-yard box and with the casual air of a man taking a Sunday afternoon stroll, he played a delicate short pass to Oleksandr Zinchenko, who in turn squared it to Vincent Kompany, who returned it to Ederson and from there it was passed out to Fernandinho.

This was a team who had lost three of their previous four games, who had they lost this one would have been 10 points behind Liverpool and who were going through the closest stretch they’ve had to a “crisis” in 18 months. But here they were, knocking the ball around yards from their own goal like they were casually fizzing it around in one of Pep Guardiola’s famous “rondos”. They have retained their confidence, at least.

Not that this was necessarily a reflection on the game as a whole. City were 1-0 up at that stage but should probably have been three or four ahead. Eventually they were pegged back after a defensive mistake, again looking startled as another team attacked them.

This was a game in which City showed exactly why there’s a still title race but at the same time why Liverpool are now favourites. At times they played sensational football, the sort of dynamic, decisive passes that had been enough for many of us to crown them champions in October. But they also showcased their weaknesses, showing some of the reasons why this victory only takes them to within seven points of the leaders.

To a point it hinged on a lucky deflection. City took the lead through David Silva after brilliant work down the right from Bernardo Silva, and after spurning several chances , Southampton’s Pierre-Emile Hojbjerg — a Pep Guardiola protege once upon a time at Bayern Munich — robbed Zinchenko to emphatically equalise.

Then, just as City were looking wobbly and the fragilities of the last few games were showing themselves again, Raheem Sterling fizzed in a low cross that was deflected in off James Ward-Prowse. Minutes later Zinchenko crossed for Sergio Aguero to essentially finish the contest just before half-time.

The second half was largely a non-event, save for the dismissal of Hojbjerg for a reckless, late foul on Fernandinho. But after the month they’ve had, that and the three points will do just fine for City.

Who would’ve thought that beating Southampton would be cause for such relief?

After the last few games, any victory will be welcomed greedily by Manchester City, and there were certainly aspects to their performance that were encouraging. The return of Fernandinho was a particular comfort, like someone arriving to hold steady a wobbly ladder you’d been climbing.

You could immediately see how much more secure City’s forward players felt knowing that the Brazilian was behind them, and equally how quickly and efficiently he was able to distribute the ball up to them from deep.

But equally this game displayed City’s weaknesses, albeit in less significant ways than the past. On the most basic level, this was the 10th game in a row where they failed to keep a clean sheet, having managed 12 in their previous 19.

It was also the fourth game in a row that they’ve taken the lead and then been pegged back by a theoretically inferior side, left reeling when an opponent was more proactive and attacked them with some purpose. For a spell in the first half, you thought another defeat was on its way.

Their problems at full-back were emphasised too: With Benjamin Mendy and Fabian Delph out, Oleksandr Zinchenko looked a liability at some points and it was his error that led to Southampton’s goal. Zinchenko isn’t a defender, so it’s perhaps harsh to criticise a midfielder pressed into action somewhere unfamiliar. But Guardiola must surely look around for alternatives, either within his squad or when the January transfer window opens on Tuesday.

At the moment, this looks like the key difference between City and Liverpool: whenever a key man is missing from Jurgen Klopp’s side, someone fills it with ease. Remarkably, with City, that has not always been the case.

This was a victory that was well-earned, but also one that reminded everyone of City’s flaws.

3. Is Hasenhuttl rotating too much?

It’s inevitable that Ralph Hasenhuttl will have to do some of his experimenting on the fly. This was Southampton’s fifth game in 25 days since he was appointed; in among all the recovery days, rest and travelling, he hasn’t had much time on the training pitch.

With an unfamiliar set of players and pressure on straight away to avoid relegation, this is a pretty extreme example of the old Brendan Rodgers line about management being “like trying to build a plane while flying it.”

However, you wonder if he’s experimenting just a little bit too much.

This game saw James Ward-Prowse, a central midfielder, spend much of his time at right wing-back, 18-year-old defender Kayne Ramsay play his first senior football of any description and in total six changes from the team that lost to West Ham on Thursday.

Of course, this is a busy time of year, and even aside from Hasenhuttl’s need to figure things out, rotation is necessary. This isn’t even quite about finding his “best team”: broadly speaking that’s an obsolete concept in modern football, where squads bring success rather than teams.

But what sort of cohesion can be found when there are so many changes? How can he expect Ramsay — who didn’t play badly here — to deal with City’s myriad attacking threats with confidence? Is it reasonable to think Charlie Austin and Mohamed Elyounoussi can develop any sort of attacking chemistry when thrown together like this?

Southampton can’t be judged too harshly for losing to City, even given their recent struggles. But Hasenhuttl’s tinkering barely gave them a chance.