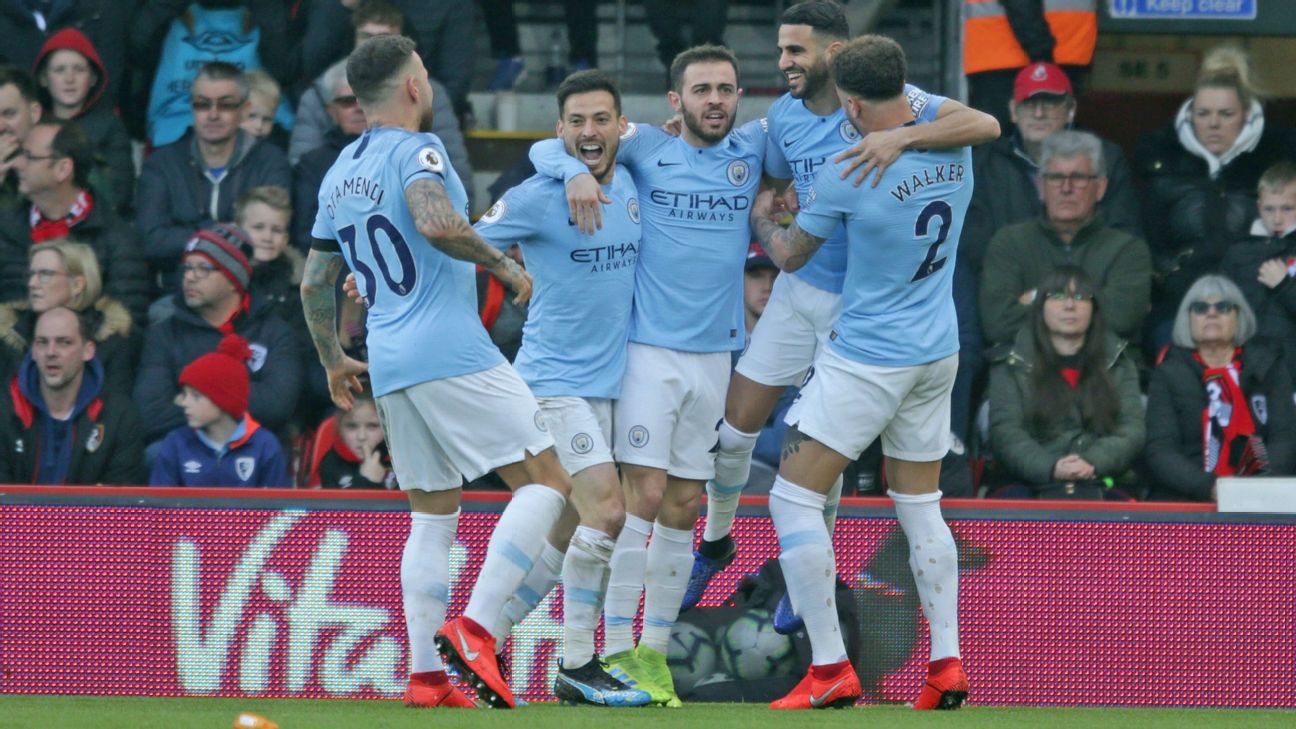 BOURNEMOUTH, England — Pep Guardiola said Riyad Mahrez‘s winning goal was “important for him” as his strike made the difference in Manchester City’s 1-0 victory over Bournemouth.

The Algerian winger has not had an easy time since moving to the champions in a club record £60 million deal last summer but got the crucial breakthrough in a tight game at the Vitality Stadium. Mahrez has found it difficult to dislodge Raheem Sterling, Bernardo Silva and Leroy Sane in the starting lineup and has struggled to make an impact, missing a penalty in the 0-0 draw with title rivals Liverpool earlier in the season.

“I have no doubts about his quality, his mentality is aggressive but he has to understand where he is: a team that got 100 points and every single game fights and runs and plays and the people in front are Leroy, one of the most important players of last season, Bernardo, the best player in the league, and Raheem, an incredible player.”

City stopped Bournemouth having a single shot on or off target as they they put the pressure back on Liverpool ahead of Sunday’s Merseyside derby. And Guardiola was delighted with their professional performance after a tough week when they played 120 minutes to win the Carabao Cup — their first silverware of the season.

“We played incredible, we made one of the best performances we ever played,” Guardiola said. “Attacking with 11 players in the box, we didn’t concede one shot on target. “These players are committed for set-pieces defensively, throw-ins, corners, second balls. Every time we lost the ball there were three or four guys going back to recover the ball. It’s not easy. They were incredibly organised with 11 men in the box and no spaces, and we found them and created a lot of chances.

“I don’t know what’s going to happen at the end of the season but these players deserve my admiration and respect. It is incredible how good they played today.”

City have now won their last eight matches since their surprise defeat to Newcastle United on Jan. 29. But as the fixture schedule piles up, with City still competing for three more trophies on top of their Carabao Cup success, Guardiola will be making full use of his squad.

Kevin De Bruyne and John Stones were both replaced with injuries although the Belgian told ESPN he hoped it was “just a precaution” as he left the stadium.

“John was more of a caution, we will see tomorrow,” Guardiola said. “Kevin is his hamstring. It’s normal. We played 25 games in 93 days I think. It means every three days and a little bit more we play one game so it’s a physiological issue.

“We demand these guys play that way every three days when the body is not always recovered. Sometimes the muscles say ‘hello, it’s enough.’ Everybody is committed and we wait for Kevin to come back. We are going to go. I don’t know how far we are going to arrive but we try.”