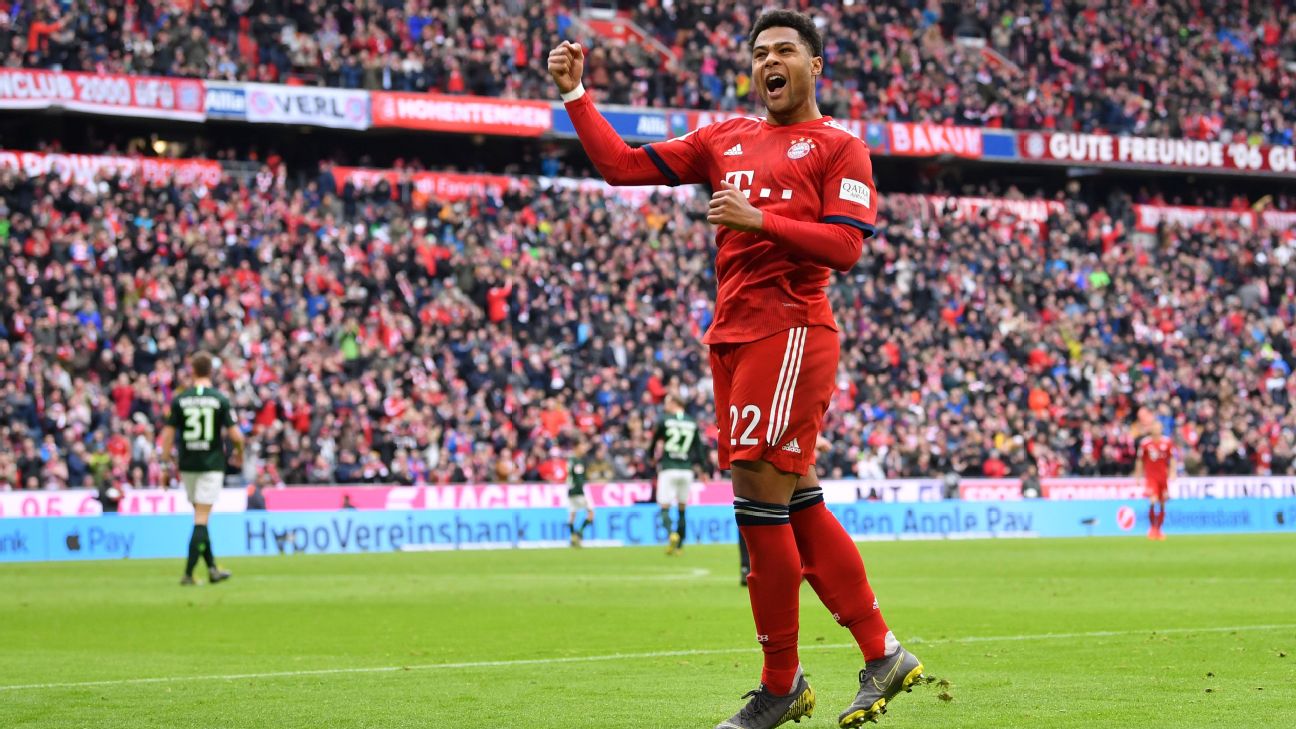 On Wednesday, Focus magazine’s sports editor Dirk Adam asked his Twitter followers whether the €80 million Bayern Munich had splashed out for the transfer of French defender Lucas Hernandez from Atletico Madrid wouldn’t have been better spent on 320 Ferraris, 80,000 iPhones or 53m scoops of ice cream. Adam forgot to include the best possible answer, however: the ideal thing the German record champions could have done with €80m would have been to buy another 10 Serge Gnabrys.

Yes, Bayern paid the almost obscenely low figure of €8m to Werder Bremen for the young forward in 2017. On the evidence of the past few months, in which the 23-year-old not only established himself as a regular for his club side but also became an automatic starter — as well as wonder-goal scorer — for Joachim Low’s new Germany, that deal looks like one of the best Bayern have ever made.

The Bavarians have the ingenuity of the since-departed technical director Michael Reschke, Gnabry’s advisors and not least the player’s own pragmatism to thank for landing this bargain. In the summer of 2016, after four years at Arsenal and a disastrous loan move to Tony Pulis’ West Bromwich Albion, Gnabry had reluctantly come to the conclusion that playing regular football was more important than persisting with his dream to make it in North London.

“In my heart, I wanted to stay,” the Stuttgart-born player told ESPN. “I always believed that I had what it takes to play for Arsenal, but these things are not always down to you.”

Arsene Wenger had been an early believer, giving Gnabry his professional debut at the age of 17. But after a series of injuries and indifferent performances, the son of a Ghanaian father and Swabian mother, had fallen out of favour. He went into the 2016-17 season with one year left on his contract and no indication that Wenger was willing to extend his deal.

“I realised that I had to work as hard possible, harder than before,” he recalled. His Arsenal teammate Per Mertesacker advised him to do extra sessions with physios to make his fragile body stronger; assistant coach Steve Bould told him to be much more aggressive on the pitch. Gnabry took their suggestions to heart and was pleased with his form in preseason.

But he still needed a big, very lucky break to make some headway. It came courtesy of an injury to his German U21 teammate Leon Goretzka (then at Schalke), which freed up a late place in the 2016 Olympic squad. In Brazil, Gnabry was a revelation in a more advanced role. He scored six goals to win a silver medal.

Then the phone started ringing: Arsenal wanted to extend his contract, but Wenger was too late. Bayern had decided to take a punt on Gnabry and secretly cooperated with Werder Bremen to bring him to the Bundesliga. Werder paid £5m to the Gunners and then sold him on to Munich for an extra million euros or so a year later, when his improvement had continued at a steady pace.

“It was a tough decision (to return to Germany) but it was a logical one,” he said. “I needed to play to get ahead.”

The same consideration saw him agree to immediately go out on loan, to TSG Hoffenheim. There, he found a crucial mentor in coach Julian Nagelsmann, who helped him mature into a top-class professional.

“He pushed me to want it more on the pitch, to really go for goal,” Gnabry said. “And he was also a real tactics freak. After games, he showed me videos, explaining that I was coming too deep and should instead look to receive the ball behind the defensive lines, that type of thing. He really opened my eyes. I see football differently now, in a more analytical way.”

Last summer, he at last arrived in Munich, physically and mentally ready to rise to the challenge. He took a bit of time to get going at the Allianz Arena, but he’s evolved into Bayern’s most reliable performer on the flanks and their joint-second best scorer, with seven goals. His fabulous strike against the Netherlands in Germany’s 3-2 win last Sunday — a “reverse Robben,” Suddeutsche Zeitung called it — underlined his superb progress.

“I enjoy the opportunities given to me by Niko Kovac and the responsibilities that come with it,” he says, humbly. “As a young player, my main aim is to help the team be successful.”

There’s a strong suspicion he could do even better if he would play more centrally for Bayern or be able to cut in from the left, as he did to devastating effect in Amsterdam. Kovac has almost exclusively played him on the right, however, which is reflected in his shot positions and key performance stats, courtesy of StatsBomb. His expected goals rate is 0.3 per game and his expected assist rate is roughly the same. The latter sounds decent but is actually a hugely impressive figure when put into context: of all players aged 23 or under in Europe’s top five leagues, only Leroy Sane provides more dangerous passes for his teammates from open play. His overall output is even slightly better than that of his Germany strike partner.

By any objective measure, Bayern have bought themselves an elite player for the fraction of his real value. And there is much more to come, still, he said.

“I have learned a simple formula: you get as much out as you put into your job, on a daily basis,” Gnabry said. “You don’t stop learning, you don’t stop trying. It might not work straight away, but I do know now that if you truly focus on improving, you will eventually improve.”