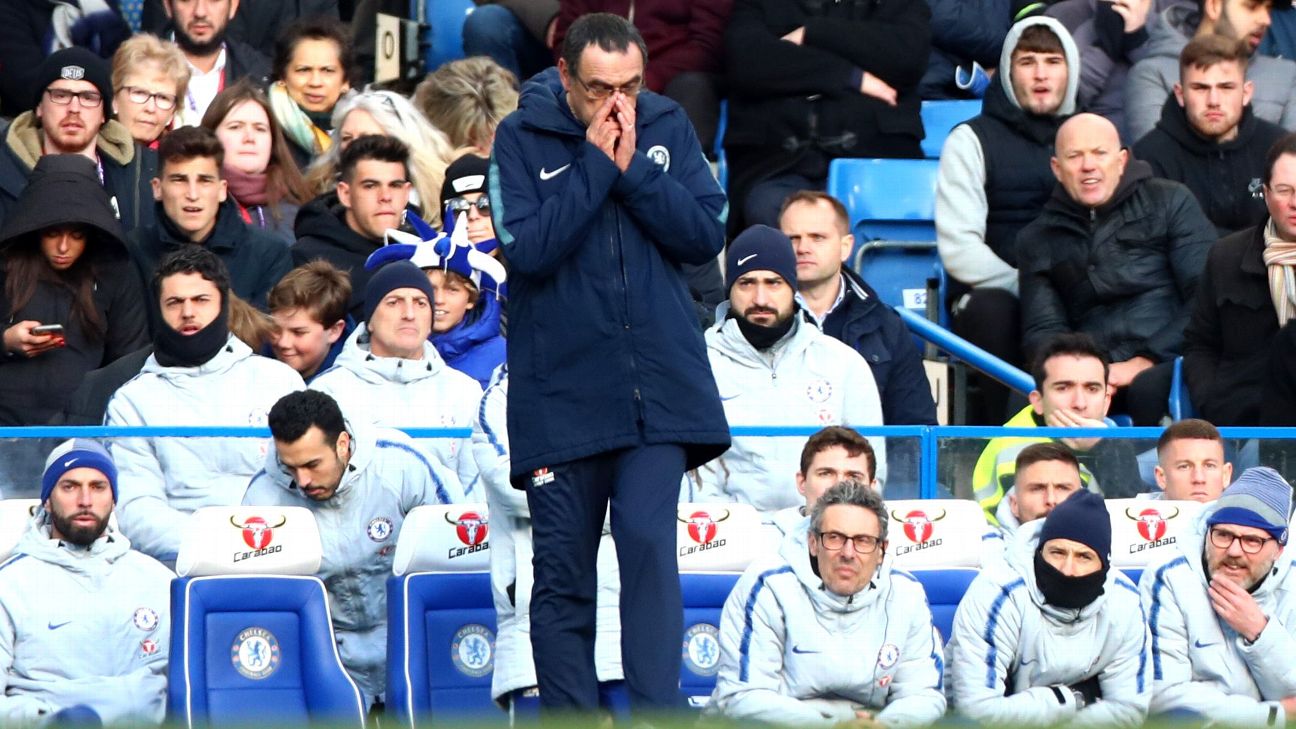 LONDON — Maurizio Sarri admitted that Chelsea missed a “great opportunity” to gain ground on their Premier League top-four rivals after they were held to a 1-1 draw by Wolves at Stamford Bridge.

Eden Hazard found the net from 25 yards in injury time to salvage a point for Chelsea after Raul Jimenez scored with Wolves’ only attempt on goal to put the visitors on course for a famous win in the 56th minute.

Tottenham’s surprise defeat to Southampton on Saturday, coupled with recent setbacks for Arsenal and Manchester United, created a situation where Chelsea could have ended Sunday back in fourth place with a win.

But after the match, Sarri was forced to concede that Chelsea could live to regret not making the most of their 76 percent possession and 22 attempts at goal.

“But, in the last six matches, we won four matches and drew the other two. So there is a little consistency in this moment. We have to think only for the next match. We need to recover two points immediately.”

Chelsea struggled for long spells to breach Wolves’ disciplined and deep-lying defence, and Sarri blamed his team’s lack of inspiration to their slow build-up.

“I think that we made a lot of mistakes, but we deserved to win,” the Italian added. “We were unlucky because we conceded a goal in the first situation inside our box — the first and the last, I think, in the whole 90 minutes — so we were unlucky for that.

“But, on the other hand, we need to improve with our attacking. The team could defend in the last 20 metres with 11 players. We needed to move the ball faster, we needed more movements without the ball, more movements into space, behind the line. We played at five touches.

“And so if there are no spaces, it’s very difficult to score if you play with five or six touches against a very physical team with 11 players in the last 20 metres. We need to improve in this kind of situation.

“Hazard is a great player who can solve the situation in any moment, but during the match he was like the other players. He needs more movement without the ball, not only when he has the ball at his feet. But this is the same for all the players, especially the offensive players.”

Sarri abandoned his favoured 4-3-3 formation for the first time this season in the final 18 minutes of the game, bringing on Willian for Jorginho and switching to a 4-2-3-1 system, with Hazard deployed centrally behind Gonzalo Higuain.

Asked why he decided to switch his tactics, Sarri replied: “Because, for the first time, we were playing against a team who didn’t want to play. They didn’t counter-attack in the last 20 minutes. So we had to try [something different], I think.

“But it’s not easy, of course, because the problem wasn’t the system, but our way of playing. We need to move the ball faster. We cannot play five or six touches in that situation. It’s very difficult to score if you do.”