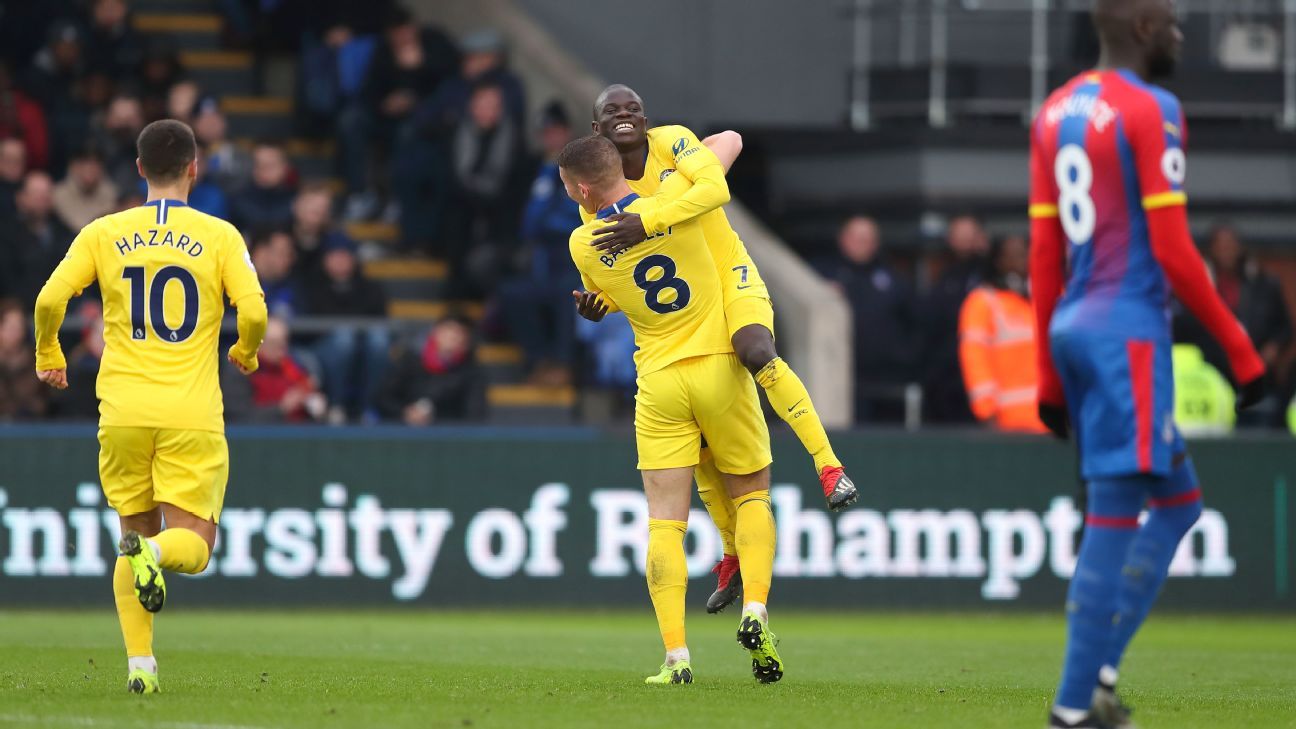 LONDON — Chelsea tightened their grip on fourth place in the Premier League with a workmanlike 1-0 win over Crystal Palace at Selhurst Park, with N’Golo Kante providing the unlikely breakthrough in the second half to score his third goal of the season.

At this time of year results are all that matters. Tottenham and Arsenal’s defeats on Saturday provided Chelsea with a great opportunity and they took it. Just two points separate them from Spurs now, while the Gunners are five points adrift in the race for Champions League qualification.

Chelsea’s attacking play was once again stagnant and uninspired for long spells, though it must be said Crystal Palace’s lack of attacking ambition was always going to make it a tough afternoon. There are also signs of fatigue in this team, perhaps a consequence of Sarri’s reluctance to rotate.

7 — Sarri’s decision to move Eden Hazard back out to the wing in favour of a true striker didn’t really work, and Chelsea looked tired and uninspired here. But they got the job done, and Kante once again showed what he can offer in the more advanced role his head coach has given him.

GK Kepa Arrizabalaga, 7 — Palace’s lack of attacking ambition made it a pretty quiet afternoon for him. One first-time clearance into the chest of Kante was a highlight of another solid and unfussy display.

DF Cesar Azpilicueta, 6 — Jeffrey Schlupp didn’t get the ball enough to trouble him and while Zaha’s tricky feet out-maneuvered him a few times, he was never beaten in a threatening area. Going forward he was typically cautious, and his best low cross was too close to Palace goalkeeper Vicente Guaita and not attacked by his teammates.

DF Antonio Rudiger, 7 — One of the few centre-backs in the Premier League with the speed and the coordination to keep up with Zaha, and deserves the bulk of the praise for keeping the Ivory Coast international quiet. Also handled the more physical threat of Connor Wickham well when he came on.

DF David Luiz, 7 — Managed to annoy Sarri and several of his teammates with poor distribution in the first half, but kept trying to be ambitious with his passes and the ball that released Kante for the goal was excellent. Zaha’s lack of impact through the middle for Palace is also to his credit.

DF Marcos Alonso, 6 — His most notable contribution in the first half was to earn a cheap booking for punching the ball away after he mis-controlled a pass out of play. Sailed a little close to the wind with some of his tackles thereafter, and never threatened to pick out Giroud with a cross.

MF Ross Barkley, 6 — Hit the post with an improvised overhead kick in the first half and showed a willingness to shoot when things opened up, even if most of his attempts were blocked. Sensible rather than incisive on his first Premier League start in almost two months.

MF Jorginho, 7 — Kept things ticking over nicely in midfield and ensured that Palace could never really disrupt Chelsea’s passing rhythm, though his reluctance to shoot was a problem at times. Noticeably attempted a few more lofted through balls than usual, though they weren’t especially effective.

MF N’Golo Kante, 8 — Served notice of his intent by unleashing two fierce shots in the first half, and managed to sneak a relatively tame effort under Guaita to give Chelsea the lead after a really smart run. The debate over his best position won’t end, but he’s certainly smart enough to be an asset to Chelsea’s attack.

FW Willian, 6 — Looked likeliest to break the deadlock in a tepid first half, rattling Guaita’s post with a curling free kick. Forced a couple of good saves from the Spaniard but his touch too often deserted him, and he couldn’t make much headway dribbling against Palace’s massed defence.

FW Olivier Giroud, 6 — Making his first Premier League start in almost a month, the Frenchman did little to convince Sarri that Chelsea should go back to favouring a true No. 9. Twice he found the net twice in spectacular fashion, having already been flagged offside, before being injured by a tackle and forced off.

FW Eden Hazard, 6 — His penchant for standing up his defender played into Crystal Palace’s deep-lying strategy while the game was goalless, and he couldn’t find the space to threaten Guaita’s goal. He did create a little more for others though, setting up Willian with a slick backheel.