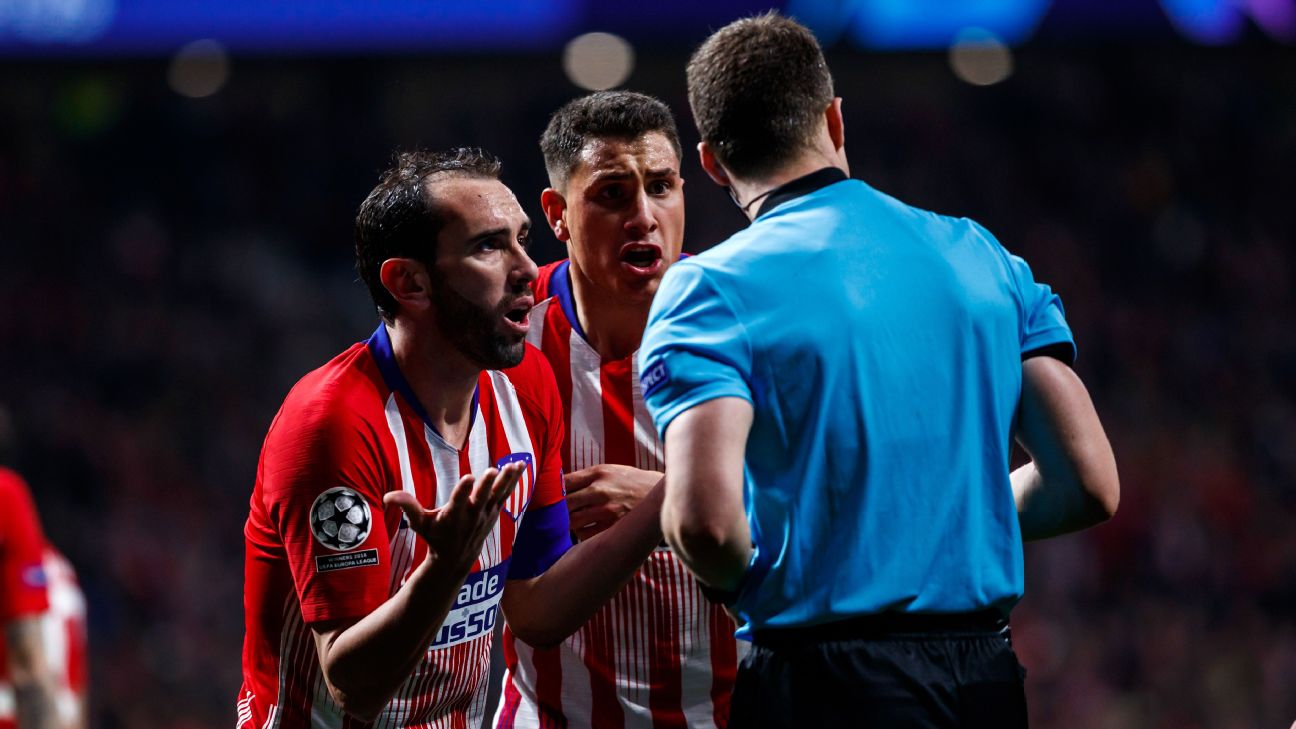 “I’m not going to deny it, I won’t lie: things are even harder now,” Diego Godin admitted. “I said it was an even fight, but it’s not any more: the gap is considerable now although we can’t think about that, we have to focus on recovering, overcoming this. We’re gutted and sad. It’s been a hard week. There was so much hope… it’s a painful blow. Football has moments like this and we have to carry on; there’s no other choice.”

There was no other choice, and no real point either. Four days after they’d been knocked out of the Champions League — their Champions League, the one with the final played at their home, the one towards which their entire season was geared and all of their planning, too — Atletico Madrid had been effectively knocked out of the league title race as well. A 2-0 defeat at Athletic Club left them 10 points behind Barcelona.

Already eliminated from the Copa del Rey by Girona, it was only March and it was all over, but that wasn’t what most made Godin unhappy, standing there on the touchline at San Mames. “What makes it worse is that we weren’t Atletico,” he said. “That’s the saddest part, the great disappointment.”

There were only a couple of minutes left in that defeat when Thomas Partey had a shot pushed over the bar. It was the first shot Atletico had managed on target in the two games that had brought their season to an end. In Turin and in Bilbao, it had all slipped through their fingers without them doing much to stop it. They hadn’t held on; there was no rebellion, little resistance. Simeone had not used up all his subs and they hadn’t put up much of a fight. “We couldn’t even kick them,” one player said in Italy.

That was Godin’s view, at least, but not everyone agreed. It was possible to watch it all unfold and conclude the complete opposite: that Atletico had been very Atletico, if maybe not quite as good at being Atletico as they once had been, and maybe that had been their problem.

Leading 2-0 from the first leg of their Champions League round of 16 tie against Juventus, they had trusted in their ability to hold onto that lead in Turin. Which made some sense: if anyone can defend, it is Atletico, the team that in recent years has made binary code of the goals conceded column. Of their last 22 European games, in 11 of them they had kept a clean sheet; in eight more, they had let in a solitary goal.

Instead of attacking Juventus, seeking the goal that would have forced the Italian side to get four, Atletico tried to defend that lead. By the time they tried to react, it was too late and too much of a break from their plan: one that some consider too familiar. Juventus’s comeback didn’t feel especially dramatic; it just felt normal, the logical conclusion of the night, perhaps even of that approach.

So much had been invested in the Champions league — both figuratively and literally — that recovering from Turin and competing was “hard,” Simeone said. The last nine times they had been knocked out of Europe, they had won their next match, but not this time. “A period of mourning,” one paper called it, and it travelled north with them, to San Mames, where the league left them as well.

Former Atletico player Kiko described what lies ahead as “10 weeks in the desert,” but what if it’s longer than that? “As long as [the league] is mathematically possible…” Koke had said, saying the thing players always say when they know that it’s as good as gone.

Watching them, seeing it all unfold and listening to Godin, it was tempting to wonder if maybe it wasn’t just this season that was over, but something else, something deeper: something tied to that style, to a generation, to an evolution that never really came and never really convinced.

Simeone had renewed his contract just a month earlier and in the aftermath of the Turin defeat, the club released a statement insisting that “a bad night” can’t eclipse all the good work; at least, it can’t be allowed to. That is of course true, and sensible, but perhaps for the first time questions were asked, criticisms made.

This feels like a moment of change; Atletico are at a crossroads. That they will not reach their final, the destination that overshadowed all else, changes things.

Simeone revolutionised everything at this club. Atletico have defied the odds, long since stacked against them. They resuscitated the derby, won the Copa del Rey at the home of their rivals and the league at the home of Barcelona: arguably the single most impressive league success in history. They reached two European Cup finals. They won the Europa League.

What they have done is extraordinary, taking on titans and in doing so, they became a giant themselves and when you’re a giant too, it’s not quite the same.

Simone is now the best-paid manager in world football. Antoine Griezmann is the third best-paid player in the world and there are good footballers alongside him. Atletico have spent €569 million over the past five years, according to L’Equipe. But it hasn’t always been money well spent and the overall improvement (if it can be called that) of the squad has brought other issues. Or, perhaps more accurately, it has revealed them.

Since Diego Costa left the first time, after the Lisbon final, they have signed 10 strikers: Mario Mandzukic, Raul Jimenez, Griezmann, Jackson Martínez, Luciano Vietto, Kevin Gameiro, Fernando Torres, Diego Costa again, Nikola Kalinic and now Alvaro Morata. Of those, only Griezmann can be declared an unqualified success so far. Not even Costa can, upon his return. Simeone wanted him back the moment he walked away, but this Costa may not be that one.

Something similar could be said about their wide or creative signings: Gelson Martins, Vitolo, Nico Gaitan, Angel Correa. Lemar cost €70m, their most expensive player ever. But if they signed them, they didn’t find the best way to use them.

Atletico have tried to evolve but have tended to “un-evolve” back again when it doesn’t work, getting back to what they know and to what the coach truly believes in. It is as if they have wanted to take a step forward, to be more attacking, more dominant — bigger, better — but have felt uneasy in that skin. Yet not all of the players are happy in their old skin, either: they want to do more; they want to play.

It is as if they want to be what they are, but what is that exactly?

Atletico were not Atletico, Godín said. Perhaps that’s because if they haven’t been able to move away from what they were, nor can they entirely stay where they were. Maybe they have fallen somewhere between the two. Earlier this season, a couple of Atletico players confided that they were frustrated, feeling constrained and denied the chance to do more. It’s a small note but a big indication, perhaps, that they are less inclined to buy into their manager’s approach than players past.

According to one paper, in Turin “Atletico died with their ideas.” The question might be whether Simeone is ready to live with other ideas and whether he can find the players to execute them on the pitch.

There will be changes; there’s little to no choice. With their season over in March, their place in the final towards which they all worked set to be taken by someone else, it all comes to a head. Departures are due and they will be significant ones. This summer will be their biggest yet, a reconstruction. But in what direction?

Gabi has gone, Godin is going. This week, it was announced that Lucas Hernandez will join Bayern Munich. Filipe Luis will go. Juanfran has been offered a new contract — like most players over 30, it’s only for one year — but is yet to respond. Jan Oblak will renew, they say, but it hasn’t happened yet. Stefan Savic, who had a confrontation with fitness coach Profe Ortega, seeks an exit. That’s the entire defence except Jose Maria Gimenez, and he has plenty of suitors.

It’s not just in defence, where the signings have been successful: it is elsewhere on the pitch that adaptation has not been so easy. Saul’s relationship with Simeone has become strained and he has stagnated; he has not been happy with his role, which has seen him play some games at left-back, and while the club won’t admit it, they would welcome a bid this summer. (Manchester City have reportedly made progress on signing him.) Thomas has publicly admitted that he has considered moving although that moment appears to have passed. Rodri, excellent in his first season, and Koke, a veteran now and the captain who was a youth teamer, do at least provide stability but neither is the purest expression of “Cholismo.”

One of Griezmann, Morata and Costa is likely to leave, maybe more if deals can be done. For all the Frenchman declares himself “sick” of the rumours, the process has begun and the reassurances are non-committal.

Last summer, Griezmann was on the verge of leaving for Barcelona, agonising over his decision in a documentary. In the end he stayed: the club paid more than they could really afford to pay him. That brought its own problems but it was all about that reaching that Champions League final, a chance that’s gone. Soon, many of them will be gone too. Maybe the old Atletico will be too?