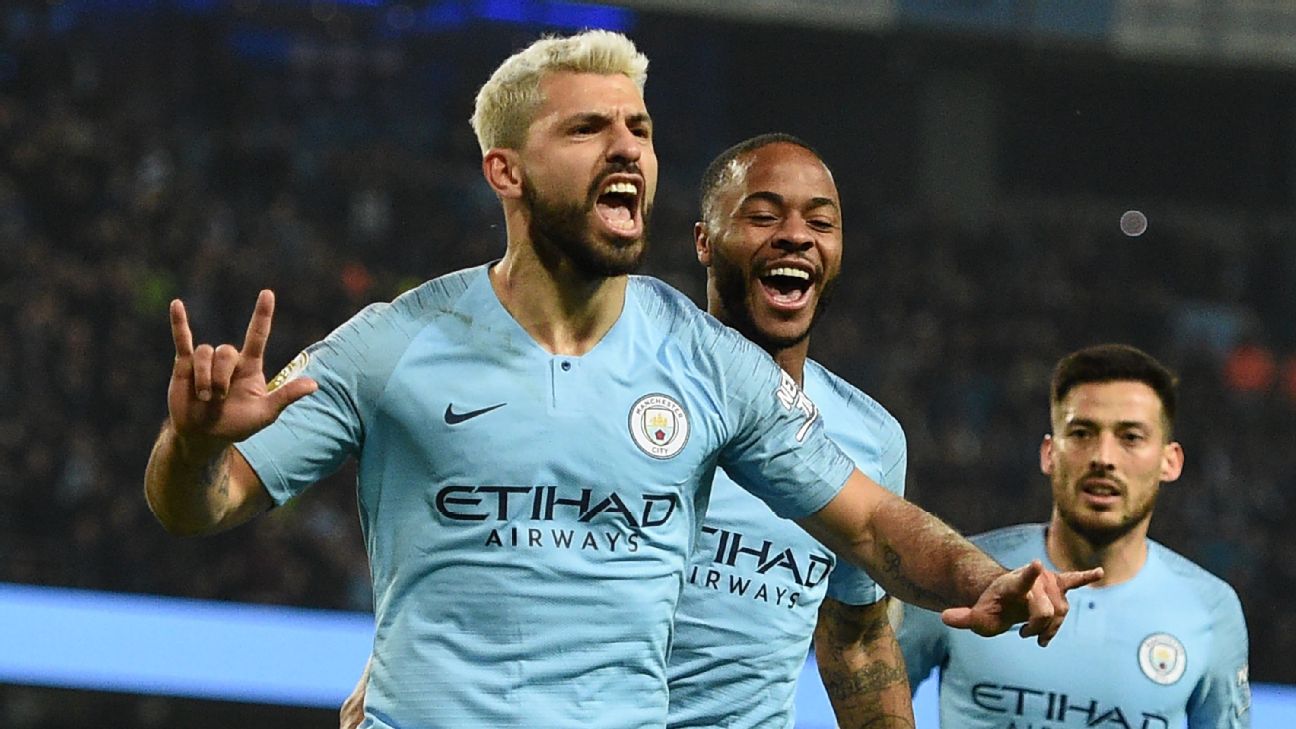 MANCHESTER, England — Manchester City maintained the pressure on Premier League leaders Liverpool with a hard-fought 1-0 victory over West Ham United on Wednesday. The champions wasted a number of good chances but secured the three points with a penalty from Sergio Aguero after Bernado Silva was clumsily fouled by Felipe Anderson.

After a gruelling 120 minutes against Chelsea on Sunday, Pep Guardiola said he didn’t want to see his players using tiredness as an excuse. And his side had to use every ounce of strength to ensure they collected the three points with fatigue clearly setting in during the final 10 minutes and with just the safety of a one-goal margin.

City would have won the game comfortably had they converted two early chances. Riyad Mahrez was far too casual with a first-time volley fired over the bar and David Silva scuffed a low shot against the post from six yards. It became an awkward and nervy night with Guardiola needing to drag on his most reliable performers in Raheem Sterling and Bernardo Silva to get the job done.

8 — Guardiola tried to freshen up his starting lineup as much as possible following Sunday’s Carabao Cup triumph, making five changes, and his side started firmly on the front foot dominating the first 45 minutes. He made quick changes in the second half with Sterling and Bernardo Silva replacing the disappointing Mahrez and Leroy Sane, and the Portuguese instantly won a penalty with both making a huge impact.

GK Ederson, 7 — A mostly quiet evening but made an important save from Andy Carroll when called upon.

DF Danilo, 7 — Kept Felipe Anderson extremely quiet but his passing was too loose on occasions.

DF Vincent Kompany, 7 — First Premier League start since his strong performance in the win over Liverpool and carried on where he left off.

DF Nicolas Otamendi, 7 — Up against the aerial threat of Carroll and didn’t put a foot or a header wrong.

MF Ilkay Gundogan, 8 — Back in the base of midfield and looked far more comfortable in the role as he pushed City forward.

MF Kevin De Bruyne, 7 — Got into some great attacking positions but nothing is coming off for the assists king at the moment.

MF David Silva, 7 — Dictated the play superbly from outside the box but hit the post from close range early on when he should have scored.

FW Riyad Mahrez, 5 — First Premier League start this year and it was a frustrating display that saw him caught offside on too many occasions. Replaced early in the second half.

FW Sergio Aguero, 7 — Great link-up play with his back to goal and patiently waited for his chance, which he finished coolly from the spot.

FW Leroy Sane, 6 — Plenty of good attacking play down the wings but the Hammers’ defence made a habit of stopping his low crosses.

FW Bernardo Silva, 7 — Changed the game with his driving run that led to the penalty.