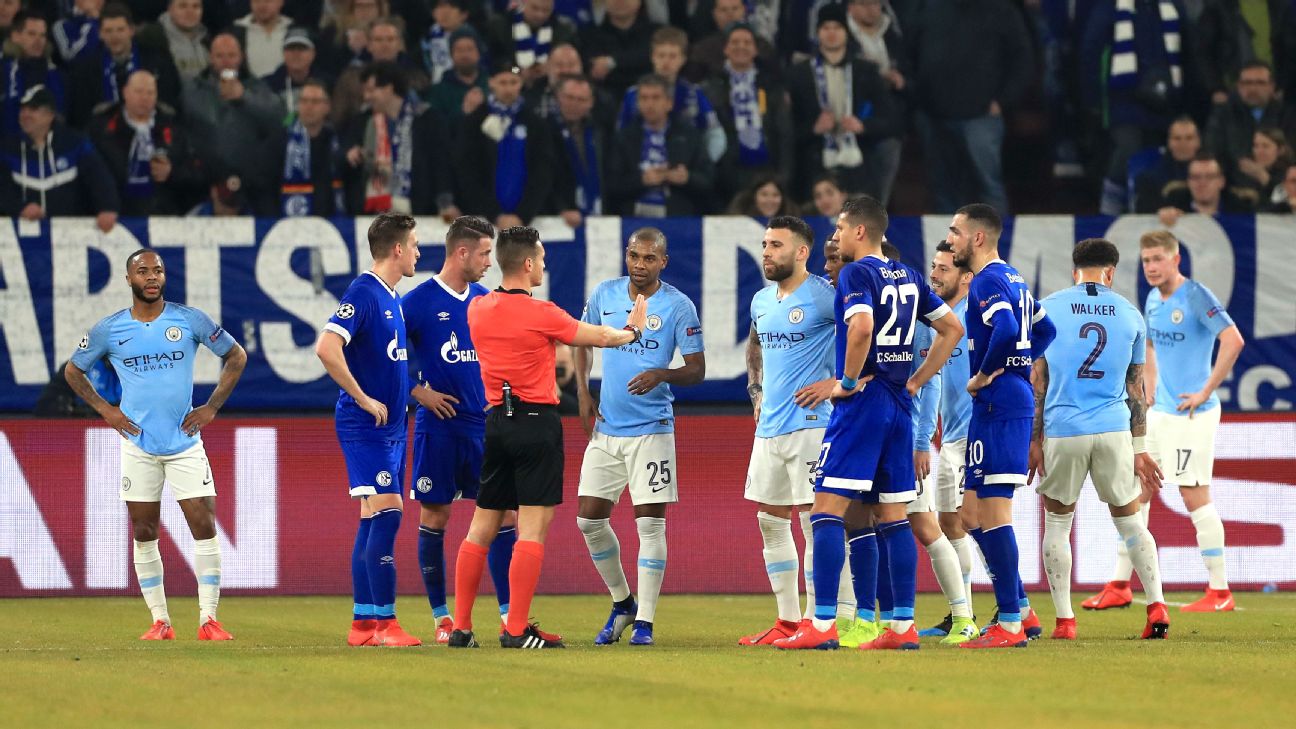 As European nights go, this one was not bad for the neutral. It served up a cauldron of grit, intensity and Diego Simeone magic as Atletico beat Juventus in Madrid while, in Gelsenkirchen, Manchester City narrowly avoided a seismic shock vs. Schalke, thanks in no small part to a local lad, Leroy Sane. Oh, and VAR had a prominent role to play in both games.

Here are eight takeaways from a wild Wednesday:

1. VAR was only introduced into the Champions League for this season’s knockout rounds and, one week apart, we caught glimpses of its effect. Seven nights after Ajax were on the receiving end vs. Real Madrid, Juventus might have lost 4-0 — consider Alvaro Morata’s disallowed goal and the penalty awarded to Atletico when Diego Costa went down — while Man City might not have gone into half-time 2-1 down and Nicolas Otamendi might not have been sent off. (Take it to an extreme, “Back to the Future” style and, in that scenario, Leroy Sane might never have had to come on and we would have been deprived his beautiful free kick.)

2. Equally, we are reminded that, minus the humans, VAR is ultimately just a bunch of cables, monitors, cameras, software and earpieces. All of them can fail, which is what happened on the Otamendi handball. The pitchside monitor set aside for on-field reviews malfunctioned, meaning referee Carlos del Cerro Grande could not review the incident. Instead, he relied on the voices on his head; all of which led to an interminable four-minutes wait for the final decision.

3. It might not be a view shared by a majority of their fans, many of whom still have a major axe to grind with UEFA, but for Pep Guardiola and Man City’s owners the Champions League is their main objective. Being down a goal and a man late in the second half did not necessarily mean it was about to go up in smoke — you would still back City to overturn a hypothetical 2-1 deficit — but it would have led to another headache in the club’s already-packed Quadruple chase. Their margin of error is minuscule in the Premier League and there is the prospect of a Manchester derby being rearranged to what will certainly be an inconvenient date. As such, the late comeback gives a more breathing space and more chance to rotate and pace themselves.

4. Guardiola said he was happy with the personality and character his players showed, but added that City’s performance shows “maybe they’re not ready” to go deep in this competition. You can see where he is coming from, in the way a parent tells a wayward child: “Maybe you’re not ready for that bicycle if you’re going to leave it lying around the driveway.” Does it matter that the two penalties conceded were the result of errors by veterans? (And, no, I don’t want to open the can of worms about Otamendi’s arm and what is or isn’t deliberate, though the directives given to referees on this are quite clear: It was.) Fernandinho is 33 and an experienced leader, while Otamendi is 31 and played in Spain and Portugal where penalties are pretty much always given for similar incidents. Both should have known and done better; you assume they will take their manager’s words as a warning and it will not happen again.

6. Juventus are probably the only side more obsessed with winning the Champions’ League than Man City — hence the reason they bet the house on bringing in Cristiano Ronaldo — but the approach against Atletico Madrid was all wrong. Manager Max Allegri has emphasized that, to do well in Europe, you need to take the game to the opposition, but on the night, Juve tried to out-Atletico Atletico, a risky game to play. Take the two goals on set pieces out of the mix and you still have a 0-0 draw, meaning you will have to score at home. Maybe a fitter Miralem Pjanic would have made a difference either way, Juve must kick it up several notches.

7. Since returning to Spain a year ago, Diego Costa has more yellow cards (16) than goals (11). Finding a reliable sidekick for Antoine Griezmann has been one of Simeone’s challenges all season — Angel Correa, Nikola Kalinic and Alvaro Morata have also auditioned for the role — but picking Costa vs. Juve seemed counterintuitive given he had played all of 32 minutes since early December and scored just once since mid-September. Yet he was the perfect fit, taking on Giorgio Chiellini and Leo Bonucci with the gusto of an ill-tempered offensive lineman.

8. Domenico Tedesco can be proud of his Schalke team and his performance, which maybe will provide a lift to their beleaguered Bundesliga season, given they are 14th and have had a rash of injuries. Yes, they conceded three goals. One was a horrid mistake by Ralf Fahrmann, who is usually a back-up but got the start as a reward for playing throughout the group stage. Another was an unstoppable peach of a free kick from Sane and the third was a Hail Mary from Ederson to Raheem Sterling, who took his goal superbly. Outside of those, Tedesco’s game plan, while not pretty, kept City at bay for much of the game.