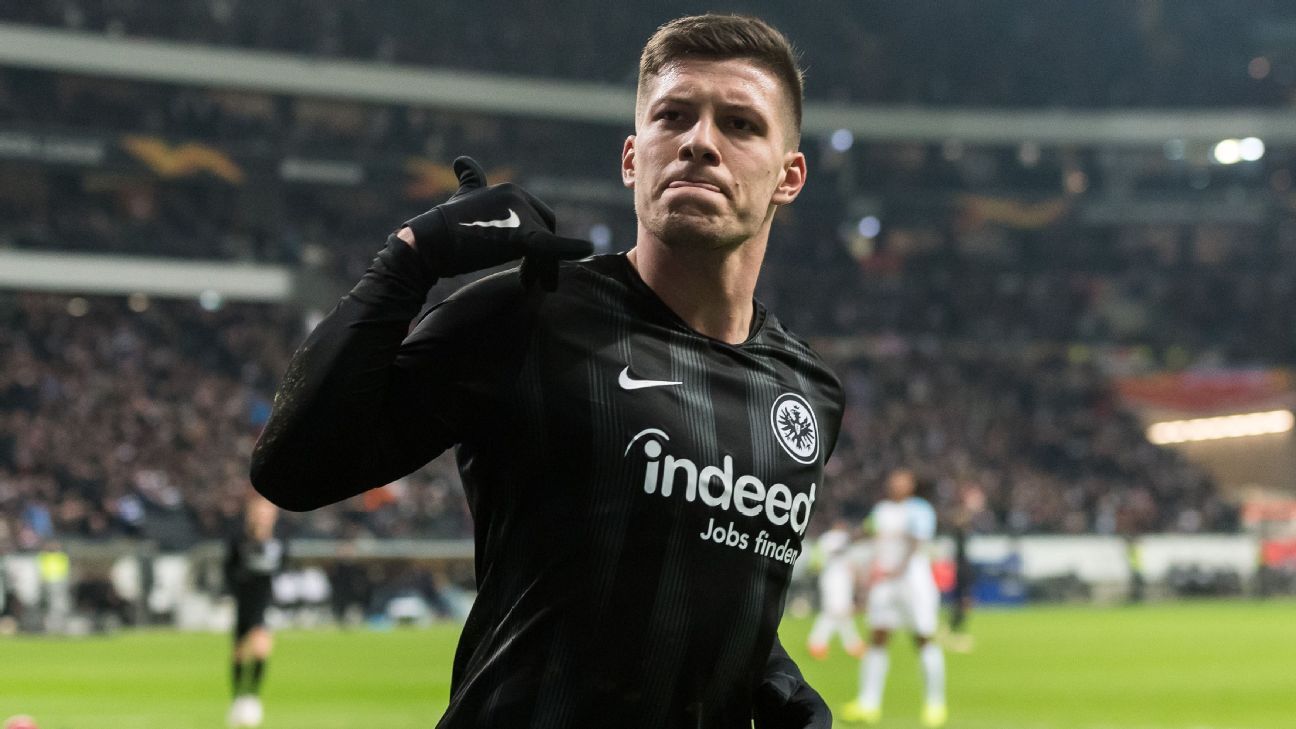 History was made in Germany when kicker chose Eintracht Frankfurt’s sporting director Fredi Bobic as its Man of the Year in 2018. The famous magazine started the tradition back in 1990 but only players and coaches were elected, with the notable exception of Franz Beckenbauer, head of the 2006 World Cup organizing committee.

Never before were club officials given the honour, but the former international striker is highly respected for building the squad that won the German Cup last season under Niko Kovac. They’ve improved this term, too, with new coach Adi Hutter enjoying magnificent results in the Bundesliga and a perfect record at the Europa League group stage. Bobic is praised for making shrewd signings on limited budget but one can hardly imagine a better deal than the one Eintracht got with Luka Jovic.

It looked like a gamble when the little known Serbian striker arrived on a two-year loan from Benfica in the summer of 2017. After all, he barely played in Lisbon and didn’t have a single cap for his national team at the time. At the age of 19, he was basically unknown to the wider public and expectations were rather low.

Fast forward to January 2019 and Jovic is one of the hottest properties in Europe. The youngster, who celebrated his 21st birthday last month, is the top scorer in Germany with 12 goals, alongside Borussia Dortmund’s super-sub Paco Alcacer. Add five goals in the Europa League and you’ve got one of the most prolific strikers at the moment.

Frankfurt, who are about to use the buyout clause in Jovic’s loan contract and pay Benfica just €7 million for a permanent move, could make an incredible profit in the summer if they decide to sell.

“Luka is once in a lifetime player for the club. We have never witnessed anything like that. I recently spoke to Bobic and he said that they could possibly dream of a €100million transfer,” Wiesbadener Kurier correspondent Nadine Peter told ESPN FC.

In fairness, Bobic knew a lot about Jovic long before everyone else. Born in Slovenia, he has superb connections in former Yugoslavia counties and once attempted to sign Jovic as a teenager when he was working at Stuttgart. There were other offers on the table, most notably that of Partizan Belgrade, who were tipped by Savo Milosevic. The former Aston Villa striker was born in the Bosnian town of Bijeljina and just like Jovic, who grew up in the nearby village of Batar, it had a significant influence over his young career. However, the entire Jovic family, including Luka himself, are fervent Red Star fans and that is the only club he wanted to play for.

Jovic and his father Milan were willing to make significant sacrifices in order to fulfil their sacred dreams. On numerous occasions they slept in an old family Vokswagen Passat car on their weekend trips to Belgrade for trainings: Luka had to attend on both Saturdays and Sundays. It didn’t make sense to make long journeys home and back. Eventually their efforts were rewarded, and top officials became aware of Luka’s talent. Red Star general director Zvezdan Terzic claims that it was impossible to miss the kid’s potential.

“Luka is a natural talent. He has it all — strength, technical skills, powerful shot and creativity. He knows where the goal is, and is a born scorer. I first saw him when he was 15, and immediately knew that he was different from all the others. He has always had class,” Terzic tells ESPN FC.

His debut in May 2014 was sensational. At the tender age of 16, Jovic came on as a late substitute at Vojvodina and immediately netted the equalizer in a 3-3 draw, thus becoming the youngest-ever scorer in Red Star history. The media attention was quite significant and at the time, Terzic claimed the striker could become “the Serbian Radamel Falcao,” which was a huge honour — the Colombian star happens to be Luka’s role model.

“People ridiculed Terzic back then but now it’s different, and he proved to be right,” Mozzart journalist Dejan Stankovic tells ESPN FC.

Initial doubts over Jovic were perhaps understandable. Jovic developed steadily under coach Nenad Lalatovic in the 2014-15 season but his replacement Miodrag Bozovic mostly considered the youngster to be bench material. By the beginning of 2016, financial problems forced Red Star to sell the forward to Benfica in a complex deal, against Jovic’s own wishes.

“I left the club too young, and didn’t even want to go,” Jovic said in retrospect, and his adventure in Lisbon proved to be a disaster.

Jovic was never in contention, only making three very short substitute appearances in 18 months. He mostly represented the reserve Benfica B team in Portugal’s second division, but failed to deliver there either. Jovic suffered from homesickness and struggled to settle, not yet fully understanding the life of a professional footballer so far from home. His only chance to start for Benfica was wasted when he was spotted at a night club two days before the match.

“It was difficult for Jovic to compete with Kostas Mitroglou, Raul Jimenez and Jonas in the first squad — practically impossible if his behaviour wasn’t up to [the club’s] standards,” Sport TV commentator Luis Catarino tells ESPN FC.

“Benfica is a big and difficult club for young foreign players. You have to put inexperienced players on the pitch and stand up for them, but that wasn’t the case with Jovic,” Terzic says, adding that he adviced Luka to move to Eintracht. “That was a good choice for him, and people at the club helped him a lot.”

Indeed, his surroundings in Germany were close to ideal. With Bobic as sporting manager, the Kovac brothers as coaches and new teammates Ante Rebic and Mijat Gacinovic, the striker immediately felt at home and could use his native language. He also had a lot of luck with coaches. Kovac, a strict disciplinarian, helped Jovic to understand what it means to be a professional and gave him priceless tactical advice.

Jovic didn’t become a first-choice striker immediately but he did get regular playing time and scored nine goals in his debut season, including the majestic winner in the cup semifinals against Schalke. Then, when Kovic took over at Bayern Munich, the much more attack-minded Hutter came in. He liberated Jovic, gave him a free hand to roam around and express himself, and made him a preferred option alogside Rebic and the French target man Sebastien Haller.

The result has been astonishing, especially the five goals in the 7-1 win over Fortuna Dusseldorf in October. The shirt Jovic wore that evening is in the club museum already. He became the youngest player in the Bundesliga to achieve the feat, and only the third foreigner ever to score five. The first, Atli Edvaldsson, quite amusingly netted five for Dusseldorf against Frankfurt in 1983. Only one player scored six goals in a game and hilariously, he was in the stands at Frankfurt when Jovic shone.

Dieter Muller admitted that he was nervous because Jovic could easily beat his record, and relieved when that didn’t happen. And yet, comparisons are now made to another — even more famous — Muller.

Gerd Muller, arguably the best pure striker in football history, averaged a goal per 105 minutes in his Bundesliga career for Bayern. At the moment, Jovic is the only player ever whose average is better among those who scored at least 20 goals: he’s put the ball in the net every 97 minutes.

It is hardly surprising that Frankfurt supporters are deeply in love with him but Jovic remains humble to it all. “Surprisingly, Luka is quite shy. It seems like he doesn’t like the hype around him and very rarely gives interviews. When he absolutely had to answer questions after scoring five goals, one could see that he felt uncomfortable in front of cameras,” Sportschau reporter Joscha Bartlitz tells ESPNFC.

Potential suitors are therefore likely to get a lethal striker who is still very modest and down-to-earth. Jovic just enjoys playing football with a smile on his face, but would a summer transfer be a wise choice for him?  Terzic is convinced that ready for the next step but kicker writer Julian Frantzke is less certain.

The Benfica adventure must be an important lesson and Jovic should only choose a club where he will be trusted, in order to continue his magnificent rise to super-stardom. And then — who knows — there might be another Luka winning the Ballon d’Or in a few years time.