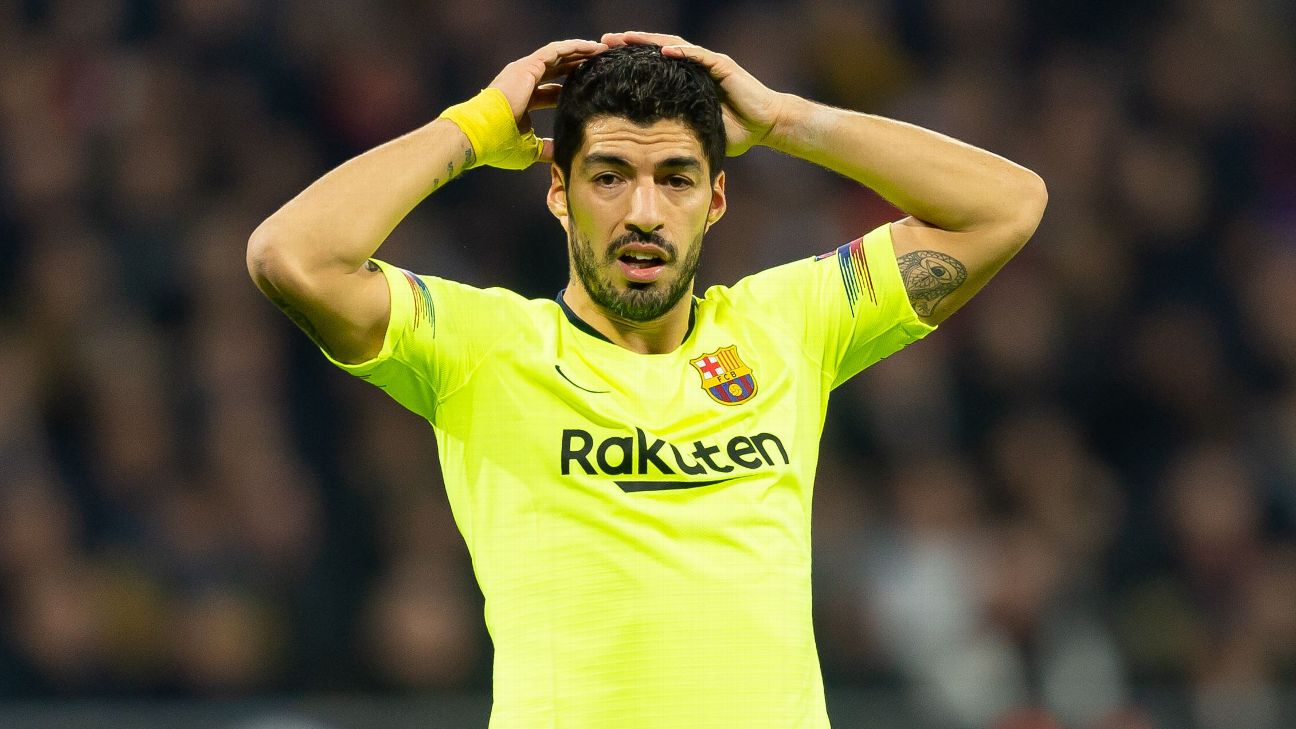 BARCELONA — Ernesto Valverde says Barcelona will “persevere” with goal-shy Luis Suarez and also defended Lionel Messi‘s form ahead of a week that begins with a trip to Sevilla on Saturday and is followed by two visits to Real Madrid.

Barca have won just one of their last five games in all competitions — drawing the other four — and Suarez has failed to find the net in any of those matches. The Uruguayan striker, who came in for heavy criticism following his performance in the Champions League stalemate against Lyon in midweek, has registered just one goal in his last 17 appearances in Europe.

But Valverde defended his out-of-sorts forward and pledged to stick by Suarez with two Clasicos looming after this weekend’s trip to Seville in La Liga.

“He is fine,” the Barcelona coach said in a news conference when asked if Suarez’s dip in form was physical. “He was on the bench last week [coming on against Real Valladolid], so he is rested.

“Having him on the pitch is a guarantee that we will get chances. It’s difficult to go without him. [The press] always focus on certain players at certain moments. In Luis’ case, it’s curious because we’ve had this focus before and then he’s scored a lot of goals — we’re talking about the fifth top scorer in the club’s history.

“In the last two games, he’s had clear chances to score. The only thing we need is for him to persevere and be patient, which is what he does. And we all have patience because he’s a great player.”

Suarez is not the only player who has been questioned during Barca’s recent dip, with doubts also raised about Lionel Messi’s fitness after the Argentine forward rushed back from a thigh problem.

“I think Messi’s at the same level as always,” Valverde added. “And I have the feeling our opponents do as well.”

After Sevilla, Barca face Madrid twice at the Santiago Bernabeu. The first meeting is in the Copa del Rey semifinal on Wednesday and the second is in the league three days later.

Valverde says he is not worried about the challenge facing his side because, despite recent results, he feels they have been playing well.

“We’re saving ourselves,” he joked when asked why the La Liga leaders have slowed down. “It depends on each game. Sometimes you dominate but don’t create many chances, like in Bilbao, other times you have lots of chances but aren’t efficient, like in Lyon.

“It’s good to analyse the stats but you have to look at the bigger picture. Our intention is to create chances and make sure the opposition don’t. I think the team’s looking good. We weren’t efficient in our last game but we played well and gave very little away. We’re looking forward to this next week.”

Defender Samuel Umtiti is in line to make his long-awaited return from a knee injury at the Sanchez Pizjuan on Saturday. With Thomas Vermaelen injured and Clement Lenglet a booking away from a ban, Valverde says “there’s a chance” the France international will start.