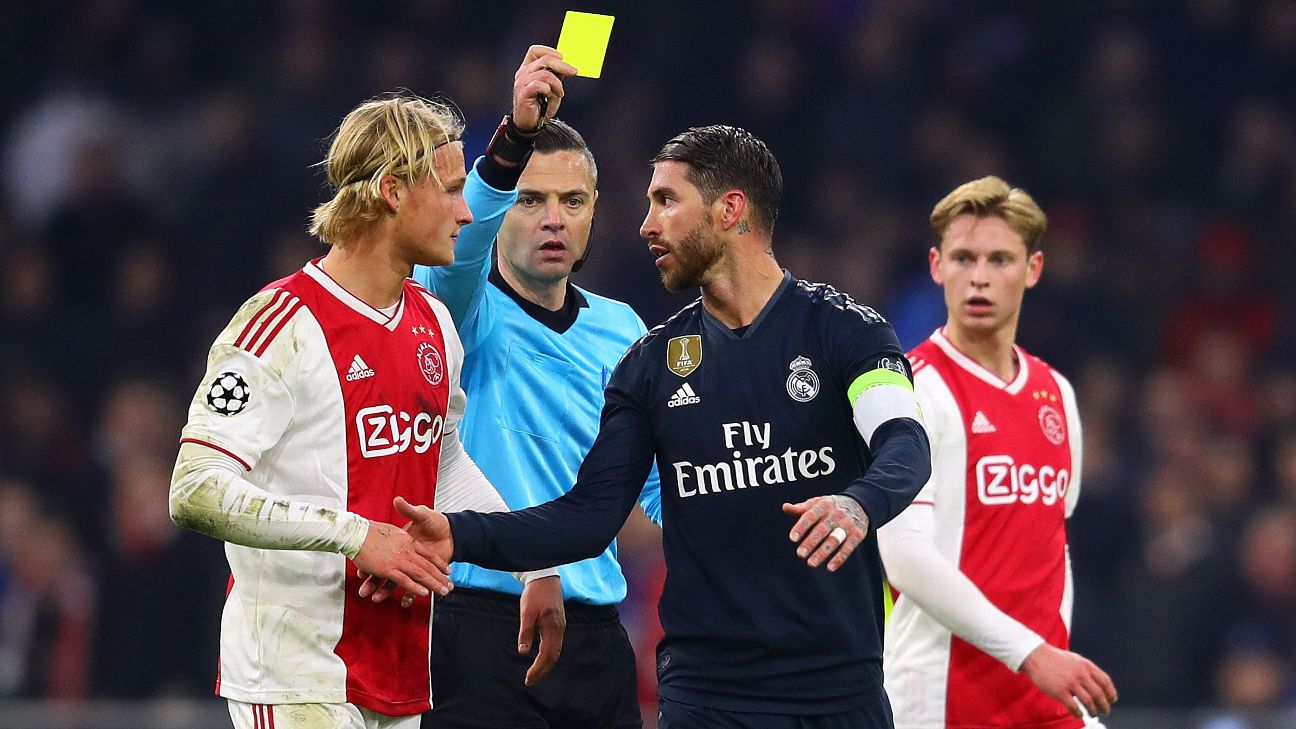 UEFA on Thursday opened disciplinary proceedings against Sergio Ramos after the Real Madrid captain admitted to deliberately picking up a late booking in Wednesday’s round-of-16 first leg against Ajax.

Moments after Marco Asensio had put Madrid 2-1 ahead in the 87th minute, Ramos clattered Ajax substitute Kasper Dolberg near the centre circle, and was shown a third yellow card in this year’s competition.

He could face a two-match Champions League suspension. UEFA will hear the case on Feb. 28.

That means he would miss the return leg at the Bernabeu on March 5, but has a clean slate for the rest of the competition should Madrid progress.

“With the result, I would be lying if I said I did not force [the yellow card], it was something I had in mind,” Ramos said. “It is not about underestimating the opponent or thinking the tie is already over.

“But, in football, there are difficult decisions to make and I decided to do it.”

UEFA regulations state that any player who “receives a yellow card on purpose” can face a two-game suspension — and Ramos has previous in the Champions League, against the same opponents.

In the 2010-11 campaign, he and teammate Xabi Alonso received one match bans when they picked up suspicious late cards during a group match at Ajax — with then manager Jose Mourinho handed the same punishment. Meanwhile, Dani Carvajal was banned by UEFA after a similar incident just last season.

An hour after the game, Ramos took to Twitter to clarify his earlier comments.

“In a game with a lot of tension, emotions and pulses racing, you must make decisions in seconds,” the tweet read. “The best thing about today is the result.

“The worst is not being able to play in the return game with my teammates and the tie still up for grabs. I want to leave it clear that I am hurting more than anybody, that I did not force the card, just like I did not in previous Champions League game against Roma. I will support the team from the stands like any other fan, looking forward to being in the quarterfinals.”

Wednesday’s game also brought controversy surrounding VAR, which was used to disallow a goal for the first time in Champions League history, as the officials decided Dusan Tadic had been offside when Nicolas Tagliafico‘s header went into the net with the game still at 0-0.

There was irony in Madrid benefitting from a tight VAR call, after they had been so critical of how the technology is being implemented in La Liga this season.

“I’m a big defender of VAR,” Ramos said in the mixed zone. “Bit by bit it is making football fairer.

“Other times it has not gone in our favour, but today it disallowed a very important goal against us.”