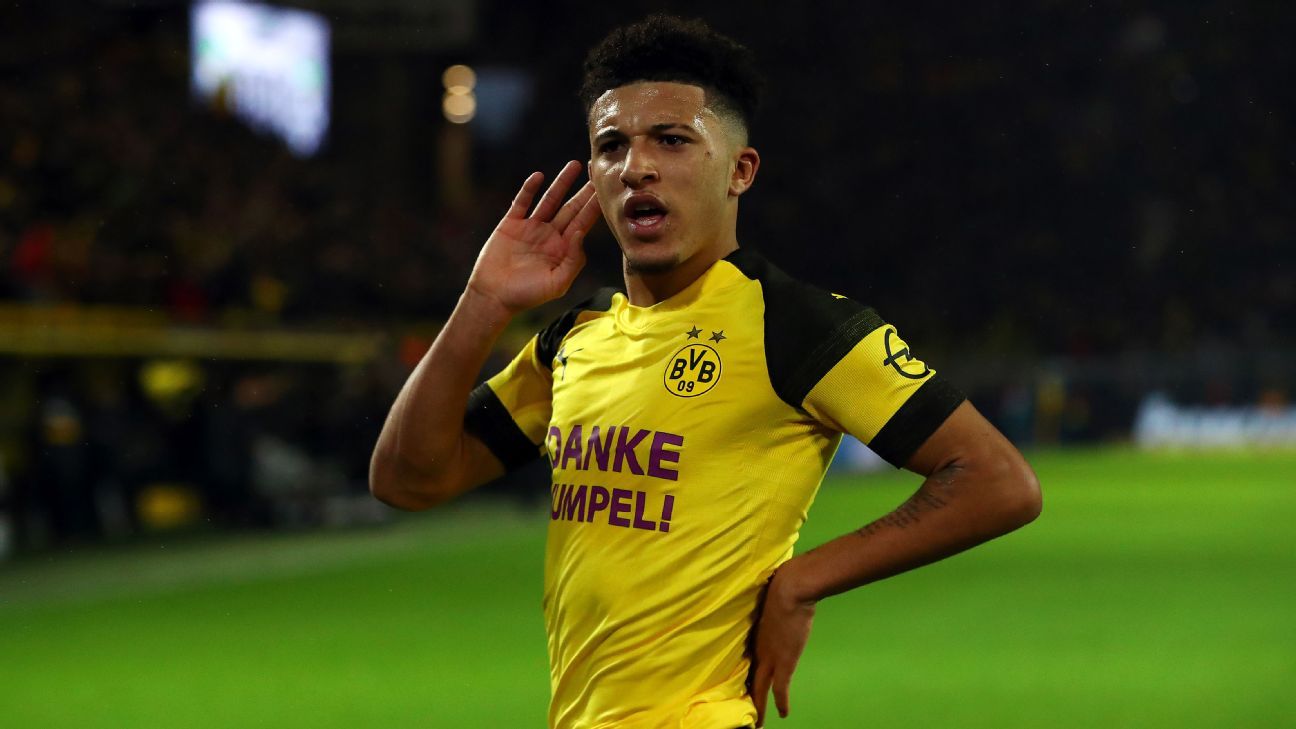 Liverpool boss Jurgen Klopp has spoken about his previous interest in Jadon Sancho which, says the Daily Mirror, hints at the prospect of an approach for the Borussia Dortmund star.

Earlier this week, Klopp revealed that Manchester City had not been willing to negotiate an exit to Anfield because they didn’t want to sell to a Premier League rival, saying: ”We are not blind – we saw him, we liked him and then we think ‘Can we get him?’ No. Because English clubs don’t sell to other English clubs.

“I don’t know exactly what the reason is for that, but they don’t do it. Now they can go to Germany, which is a wonderful league.”

However, Klopp reportedly feels he might have more luck now Sancho is playing for the club he used to manage.

Sancho is also reportedly attracting the interest of Manchester United, Tottenham, Arsenal and Chelsea, but whoever signs him might have to break the bank.

Dortmund sold Ousmane Dembele to Barcelona for £100 million in 2017, and the Bundesliga leaders would be looking to bring in a similar amount for Sancho.

22.59 GMT: That’s going to bring Tuesday’s edition of Transfer Talk to a close. Thanks very much for joining us, and be sure to check back in a few short hours when we return with the latest gossip pulled from Wednesday’s back pages.

21.44 GMT: You’ve read the rumours of Liverpool’s interest in Jadon Sancho, but the Mirror is now reporting that Manchester United have made the 18-year-old their primary transfer target this summer — and are aware they have no hope of landing the Manchester City academy graduate unless they qualify for next season’s Champions League group stage and offer Borussia Dortmund a fee in excess of £100m.

20.07 GMT: The Express cites Goal as reporting that Barcelona are nearing a £17m double swoop of Palmeiras starlets Vitao and Luan Candido.

18.30 GMT: Another potential Liverpool summer transfer for you now, this one courtesy of the Mirror, which says Jurgen Klopp could make a move for prolific Sporting Lisbon midfielder Bruno Fernandes, who has 21 goals so far this season.

17.45 GMT: Reports have linked Napoli midfielder Piotr Zielinski with a potential move to Liverpool, but the man himself says there’s nothing to them, telling Tutto Mercato Web: “I’ve never talked to [Jurgen] Klopp. There’s nothing to say about Liverpool or anyone else.”

17.15 GMT: Midfielder Mateo Kovacic, on loan at Chelsea from Real Madrid, has told Madrid he wants to stay at Stamford Bridge beyond the end of the season, according to reports in Spain.

16.45 GMT: Liverpool youngster Adam Lewis, who can play in defence or midfield, has signed a new contract, the club have announced.

Liverpool-born Lewis, 19, was part of the recent first-team training camp in Marbella, Spain.

We’re delighted to announce Adam Lewis has signed a new long-term contract with the Reds! 🙌 https://t.co/RNLO3Q2G1c

16.20 GMT: Stoke are looking to sell forward Saido Berahino after he was arrested on suspicion of drink driving, according to the Daily Mail.

Berahino has been at the club since January 2017, when he joined from West Brom for £12m.

15.25 GMT: Manchester United are still hopeful of reaching an agreement with David De Gea over a new long-term contract that could see him earn £350,000-a-week, but there are concerns that agent demands are driving up the price of the deal, sources have told ESPN FC.

United are prepared to recognise De Gea’s status as one of the best goalkeepers in the world by rewarding the Spain international with a new five-year contract that would make him one of the highest paid players at Old Trafford.

13.31 GMT: Inter Milan general manager Beppe Marotta has said Juventus sporting director Fabio Paratici is “out of order” for suggesting they could make a move for Mauro Icardi in the summer.

Paratici said the Bianconeri had asked about Icardi before signing Cristiano Ronaldo last summer, and added that “questions about Icardi may be on the agenda again, or not.”

12.36 GMT: The agent of Atletico Madrid defender Stefan Savic has refused to deny speculation linking his client with Juventus.

“His contract with Atletico expires in 2022,” Zarko Pelicic told Tuttomercatoweb when asked about interest from Juve ahead of Wednesday’s Champions League round-of-16 first leg between the two clubs. “He’s happy in Madrid.

“We will see, however, what happens in the future. That’s all I can say right now. The rumours about Savic don’t surprise me because they’ve always existed.”

However, the 38-year-old will not be available for the Europa League round-of-32 second leg clash away at Napoli, which the Swiss side trail 3-1.

It seems almost impossible to imagine but, at 31, the end of Messi’s career is far nearer than the start — you would think, at least.

Bartomeu said Barca would be looking at the “three great schools of footballers — the Brazilian, the Dutch and the French.”

09.45 GMT: Sticking with Real Madrid, Rodrygo, who Los Blancos have agreed to sign from Santos at the end of the season, has told ESPN Brasil he could stay in his homeland until the end of the year.

Manchester City forward Gabriel Jesus did something similar when he left Palmeiras for the Etihad Stadium in 2016.

08.50 GMT: Real Madrid left-back Marcelo met sporting director Jose Angel Sanchez on Monday to express his disappointment over his situation at the club and the possibility that he could leave in the summer, according to Cadena Cope.

Marcelo has been at Madrid for 10 years but has lost his starting place this season. The Brazil international did start in Sunday’s 2-1 loss to Girona and faced heavy criticism from the Madrid faithful for an under-par performance.

08.05 GMT: Real Madrid have almost wrapped up the signing of Porto defender Eder Militao, according to Marca.

The Spanish outlet reports that the Brazil international only has to sign on the dotted line to complete a move for around €40m.

Militao, 21, is a versatile defender who can play at right-back or in the heart of the defence.

With Aaron Ramsey off to Juventus in the summer Arsenal will need another central midfielder, and according to the Mirror Unai Emery will try again to bring Ever Banega to the Emirates.

The Gunners reportedly hoped to land the 30-year-old in the January window, but didn’t have the funds to seal the deal. That should change in the summer, when they could trigger his £17m buyout clause.

Emery has twice worked with Banega, first at Valencia and then at Sevilla, where the pair won the Europa League together in 2015 and 2016.

Spurs on hunt for new defender

With Mauricio Pochettino expected to be shopping for a new centre-back come the summer, Real Betis defender Aissa Mandi is the latest to be linked with a move to North London.

According to El Desmarque, both Spurs and Arsenal are tracking the 27-year-old, who has made 34 appearances in all competitions this season and is set to make a century of appearances since his move to the club in 2016 in the next few weeks.

A central defender who also can play as a full-back on either side, the Algeria international has been in impressive form this season. His versatility would suit Spurs, but they would have to meet a £26m release clause.

Eintracht Frankfurt forward Luka Jovic is a wanted man. Real Madrid, Chelsea and Bayern Munich have all been linked with the Serbia international, but Goal reports that Barcelona are at the front of the queue.

Frankfurt are said to be hopeful of completing the permanent signing of the Benfica loanee, who has 19 goals in 29 appearances, in the summer for around £5.5m before looking to get around 10 times that amount for his signature.

Samuelsen has been recalled from his loan spell at VVV-Venlo in the Eredivisie after playing just 400 minutes this term, and is reportedly looking for more first-team action.

– Romain Saiss is set to sign a new deal at Wolves, according to the Telegraph. Saiss, 28, is the latest player set to commit his future to the club following contract extensions for Conor Coady and Matt Doherty last week.