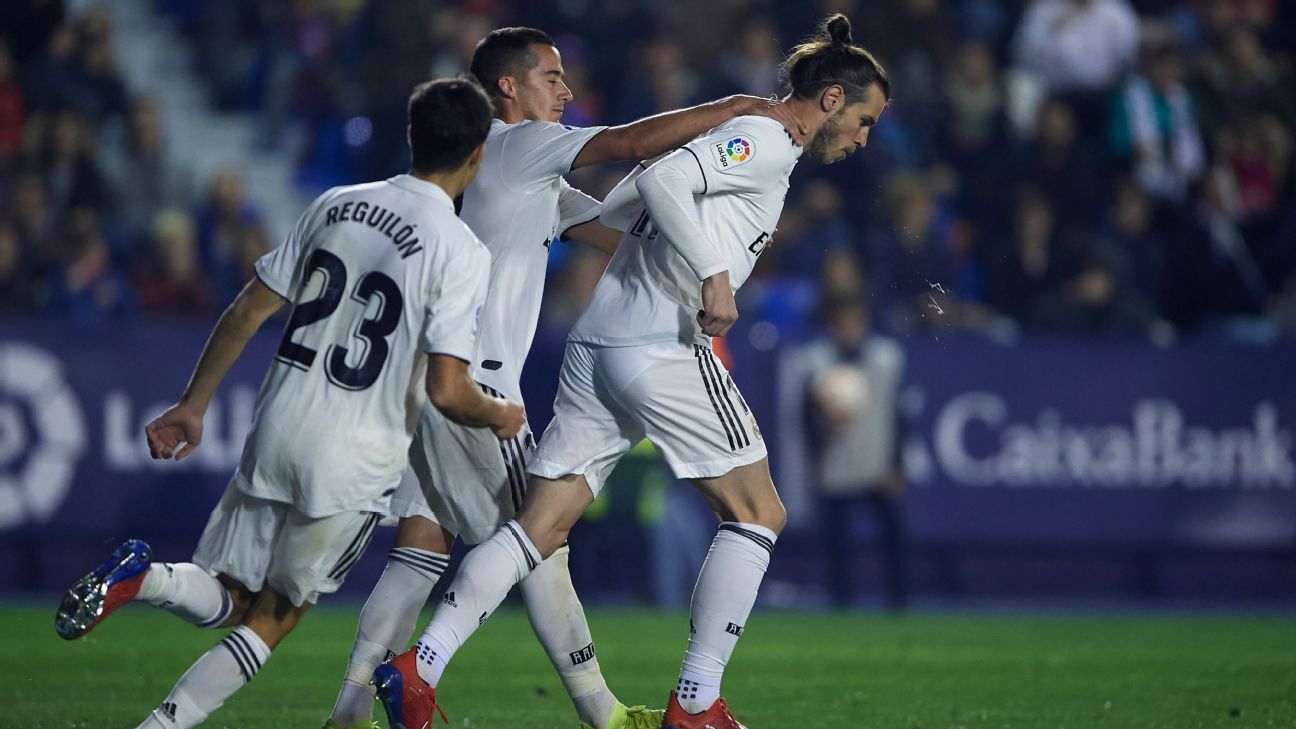 Real Madrid coach Santi Solari said that Gareth Bale can “celebrate however he wants” after the Wales international appeared to snub his teammates when scoring the decisive penalty in Sunday evening’s 2-1 La Liga victory at Levante.

A Madrid side who seemed distracted ahead of two Clasicos against Barcelona next week got the points due to two VAR-awarded penalties converted by Karim Benzema and substitute Bale, with Levante’s Roger Marti taking just one of the many chances his team created over the 90 minutes.

Bale has now started just two of Madrid’s eight games since his most recent return to fitness. Although his camp told ESPN FC this week that he remains very happy at the Bernabeu, the 30-year-old appeared to turn down a high five from teammate Lucas Vazquez amid a very downbeat reaction to scoring a match-winning goal.

With Bale still facing a potential suspension for a reported gesture to Atletico Madrid fans after scoring in a recent 3-1 derby win, Solari told the post-match news conference that he had no complaints at all about his No. 11’s impact on the game.

“Gareth has been celebrating the victory in the dressing-room, with the rest of them,” the Argentine said. “I’m sorry, I did not see [his celebration], what I saw was how hard he worked to help the team. I was delighted that he scored, but above all the spirit he showed on the pitch in the minutes he got, how he helped the team to win the game. When we had 10 players he filled two roles up front. I’d like him like that every day. Once he scores he can celebrate however he wants.”

The other talking point from the game was Madrid’s second penalty, with VAR confirming the referee’s decision to point to the spot, even though replays appeared to show minimal if any contact from Levante substitute Cheick Doukoure before Madrid midfielder Casemiro fell to the floor.

Many at the Bernabeu have been critical of La Liga’s implementation of VAR through the season, but Solari had no complaints this time.

“The problem which we coaches have is that we do not have a monitor,” he said. “I believe Casemiro who says that he caught him, hit him, on the ankle. I have no doubts if my player tells me. And I’m told the images show the impact clearly. That is why the VAR is there.”

Following last week’s 2-1 defeat at home to Girona, Madrid were again well below their best. Solari, however, said his team were going well ahead of Clasicos against Barcelona next Wednesday in the Copa del Rey and Saturday in La Liga.

“We always focus on the positive,” he said. “The other day against Girona we had a dip, and lost three important points. Today we won in a very difficult place to come. We had not beaten Levante for some years. We played a serious game, worked hard, and won. Maybe we could have scored more goals, Vinicius had chances in both halves, which would have made it clearer. We are feeling good going into this week, full of optimism and looking forward to competing.”