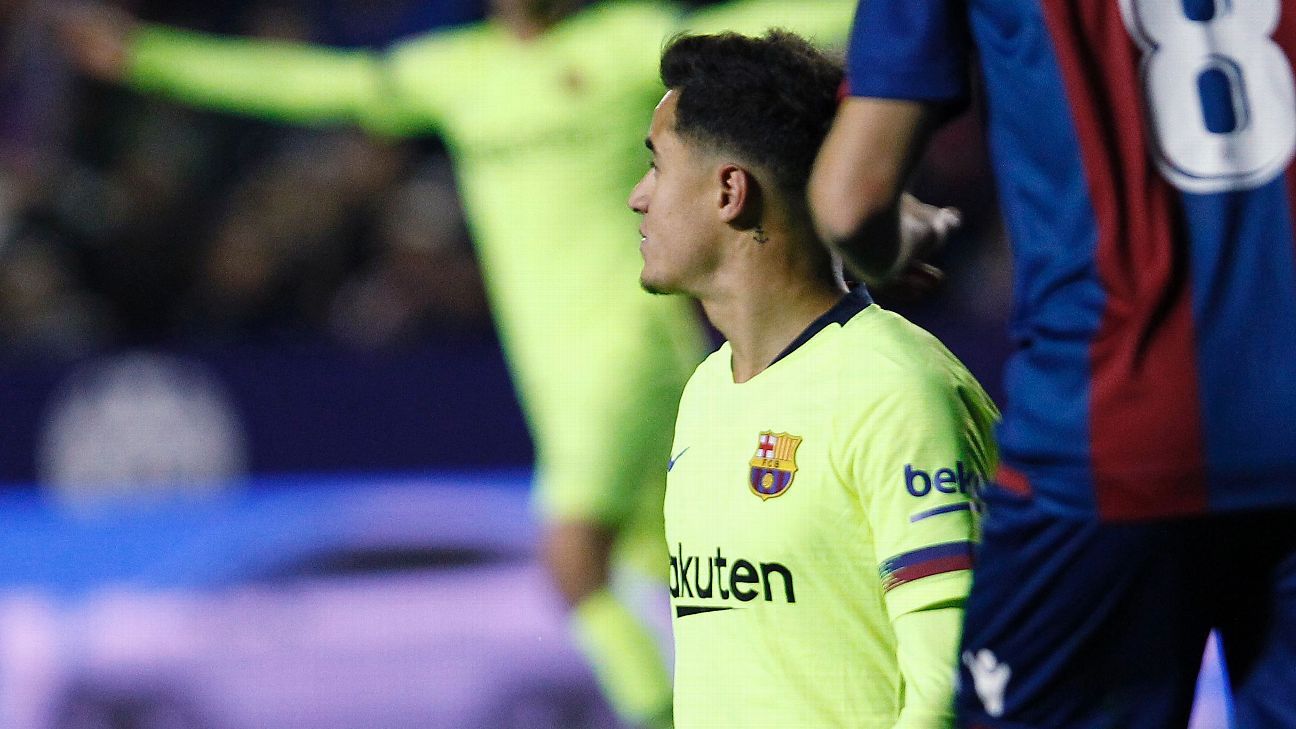 Sergio Busquets bemoaned Barcelona’s sleepy start as their hopes of winning a fifth successive Copa del Rey were dealt a setback by Levante in their round-of-16 first leg tie on Thursday.

Early goals from Erick Cabaco and Borja Mayoral helped Levante take a shock two-goal lead inside 18 minutes as a heavily rotated Barca side, which was missing Lionel Messi, struggled to find their feet.

However, the La Liga leaders improved after the break and Philippe Coutinho’s late penalty gives them hope of progressing to the quarterfinal heading into next week’s second leg at Camp Nou.

“The tie is open after Coutinho’s goal,” Busquets told reporters after the 2-1 loss. “The team deserved that, above all for the way we played in the second half. In the first half, we came out asleep and they were able to take advantage of that, putting us on the ropes with two goals.

“They dropped their intensity after that, though. They had [Jose Luis] Morales’ chance [to make it 3-0], but I think in general we were better and deserved — at the very least — our goal. We had chances.”

Busquets captained an inexperienced Barca side on the night, with Messi, Luis Suarez, Ivan Rakitic, Gerard Pique and Jordi Alba not even making the trip to the Ciudad de Valencia stadium.

“When it came to picking the side, I thought that was the best team we could pick for the game,” Valverde said in a news conference when asked if he regretted his team selection.

“The game also served to check out some players in a La Liga-level game. It’s a risk, maybe, but these are the risks we take.”

Valverde added that he was “happy” with centre-back Murillo’s first showing since signing on a six-month loan from Valencia but conceded it had been a “difficult test” for Miranda and Chumi, who were both substituted.

It was also a mixed night for Coutinho, who has been left on the bench in Barcelona’s last four league games. The Brazilian, the club’s record signing at €160 million, had endured a frustrating night before scoring the late penalty.

“When [Ousmane] Dembele wasn’t playing, everyone was asking me about him,” Valverde responded when asked if Coutinho’s unhappy with his lack of minutes at the moment.

“Now, Dembele’s playing and Coutinho’s not and the reverse is happening. What the players have to do is work hard to revert the situation. Both of them have played tonight. And if one of them isn’t happy, they have to fight to turn things around.

“But, come on, one or the other is nearly always playing. Coutinho gives us a lot and will keep giving us a lot.”

On Coutinho’s situation, Busquets added: “Everyone wants to play. There’s tough competition here [for places]. There are a lot of midfielders and there are only three positions.

“It’s difficult to come into the side, too, when you’ve not been playing [regularly] and you have less confidence and rhythm. But I believe that Philippe is going to help us in what’s left of the season.”