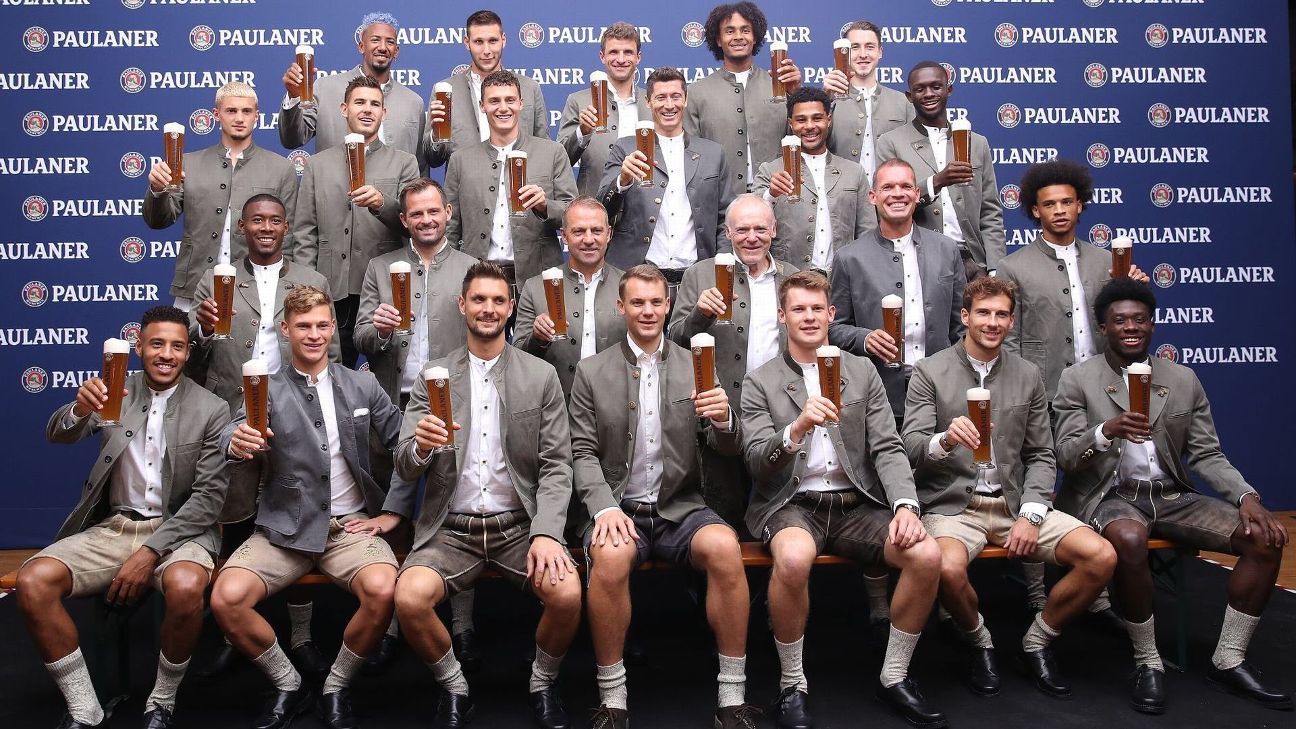 In the German state of Bavaria, the nights are beginning to draw in and a there’s a distinct autumnal chill in the air, which can only mean one thing: Bayern Munich players frollicking in leather shorts.

The Toe Poke Daily is here every day to bring you all the weirdest stories, quirkiest viral content and most magnificent merch that the internet has to offer, all in one place.

Germany’s top division is on ESPN+. Can Bayern Munich stay on top or will the likes of Borussia Dortmund and RB Leipzig take over?
ESPN+: Live games and replays (U.S. only)
Bundesliga home | Schedule | Standings

This year’s traditional Oktoberfest festival has been cancelled due to the COVID-19 pandemic, but the Bundesliga and European champions maintained tradition by gathering for their seasonal photo shoot, donning their finest lederhosen and bonding over gigantic glasses of beer.

It was the first time Leroy Sane — and fellow newcomers Alexander Nubel and Tanguy Kouassi — joined in with the festivities since arriving from Manchester City, and the new boy fitted in effortlessly with the rest of the squad.

Meanwhile, the seasoned members of Bayern’s 2019-20 Champions League-winning squad, like Thomas Muller, Serge Gnabry, Robert Lewandowski and Alphonso Davies, looked right at home as they clinked glasses and joked together.

🗣️ @esmuellert_: “It’s nice when the new arrivals wear Lederhosen for the first time. We always have a laugh about it!”

“I tried on the lederhosen for the first time today,” said Sane, who scored on his Bayern debut in Friday’s 8-0 thrashing of his boyhood club Schalke (stream the replay on ESPN+ in the U.S.).”They’re a bit tight and feel a bit strange, of course, but I think I’ll get used to them over the days and years.”

“I hope to be able to make my debut at the Oktoberfest one day too.”

Something tells us he’ll fit right in at the Allianz Arena. Prost!

James Rodriguez has only been at Everton for a matter of weeks but that hasn’t prevented one eager fan from getting a bizarre tattoo of the Colombia international.

Avid Toffees supporter Ben Hughes went viral after his side’s opening day victory over West Brom when he was filmed handing a bemused James a bottle of wine through the player’s car window.

A bottle of Echo Falls to James Rodriguez from the Royal Oak Blues. 😂👏👏
🎥 ⁦@awaybusblue1878 pic.twitter.com/GcbecdZBAK

To immortalise the encounter, Hughes has now gone and had an image of James, dressed as James Bond (in reference to this notoriously confusing newspaper headline from 2014) along with the brand name of the wine involved.

“I was in the offy [liquor store] and I bought myself some beers and a bottle of wine for the missus,” Hughes told the Liverpool Echo about the incident which led to him getting the ink job on his calf, which took three hours to complete. “As we came out my mate had spotted him and was taking a selfie.

“I thought I wasn’t going to part with my beers so I gave him my missus’ Echo Falls. She wasn’t happy but when I explained to her she was all right about it.”

Given that James is only two appearances into his Everton career (a 1-0 win at Tottenham Hotspur and a 5-2 victory over West Bromwich Albion), we dare not think what sheer lunacy might lie in store if he continues his great from with another decent Premier League performance against Crystal Palace this weekend.

– Vickery: Everton move a chance for James to deliver on potential

Worst penalty ever? Shootout ends with ball sent into orbit

A feast of penalties tonight in the FA Cup tie I was at.

Four penalties in the 90 mins, one scored by each side & a further two missed by Aylesbury United.

Moneyfields then won the shoot out 4-3 (after 7 pens each). pic.twitter.com/Gj1noF25zG

Let’s face it, we all love an absolutely woeful penalty miss and they don’t come with much more woe than the incredible botch that brought Tuesday night’s FA Cup tie between Aylesbury United and Moneyfields to an end.

The game proved to be a bona fide spot kick-fest, with four penalties awarded in normal time (both teams scoring one apiece before Aylesbury missed another two) — so therefore it shouldn’t come as a surprise to learn the tie ultimately had to be settled via a shootout.

Moneyfields won that 4-3 but only after Aylesbury mustered their most spectacular miss of the entire evening. The collective howl as the ball disappeared over the perimeter fence and into the inky black night sky, never to be seen again, is just sublime. Non-league in a nutshell.

Overall, a total of nine penalties were missed over the course of the Aylesbury-Moneyfields game: two in normal time and seven more in the shootout.

Loved being on @SkySportsPL last night, but managed to get myself locked in the changing room for 90 mins before the show! Thanks to the staff for getting me out with 2 mins to spare – you’d never have known 😎! @Carra23 & @DavidJonesSky were bricking doing the show without me 😂 pic.twitter.com/GqPtV7RY9R

Micah Richards has been gaining a lot of positive feedback for his punditry skills of late, but his phenomenal powers of escapology shouldn’t go without a mention either.

The former Manchester City and England defender managed to get himself locked in his dressing room shortly before he was due to appear on Sky Sports on Monday evening.

Richards claimed he was trapped for 90 minutes, only to be rescued by the production staff mere moments before the show went live.

Thankfully, the 32-year-old was able to rush to his chair, fix his tie and just about get himself ready for action in the nick of time, much to the amusement of co-pundit Jamie Carragher.