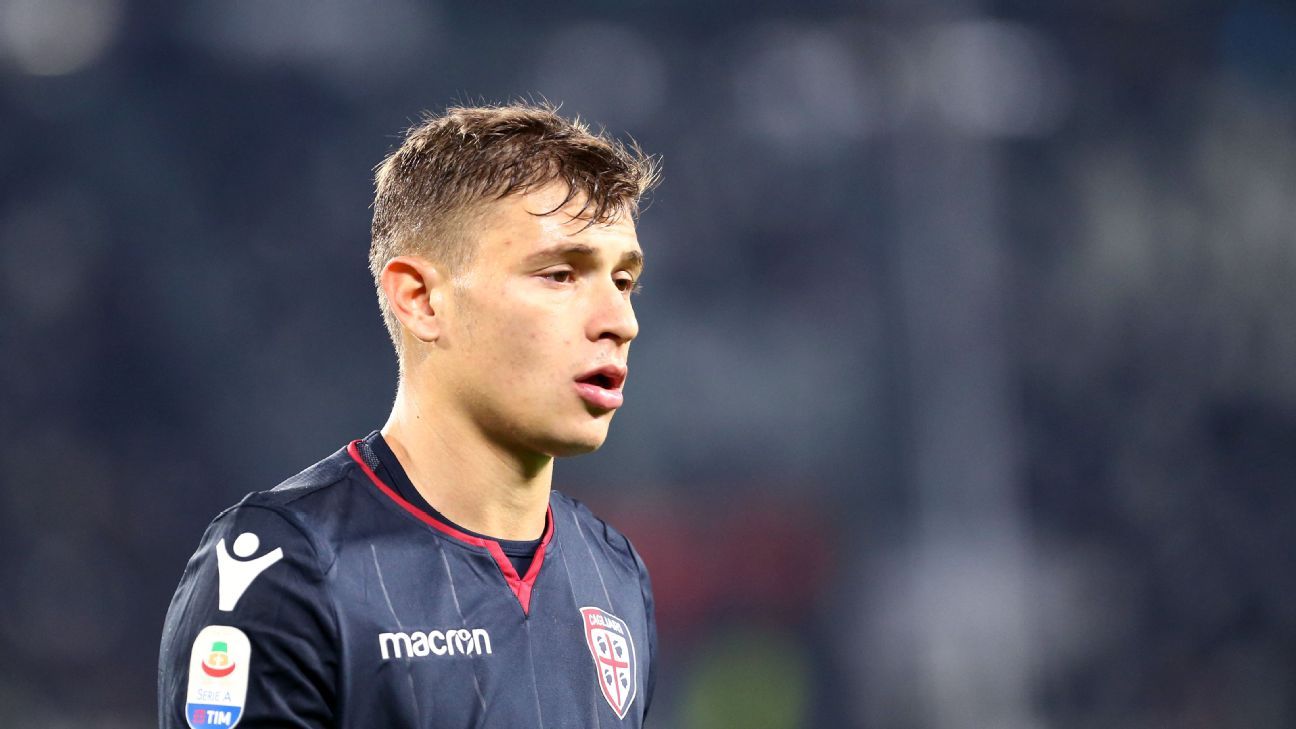 If Nicolo Barella saw a bunch of coffee stained papers down the local bar or a bundle of well-thumbed and dog-eared sports dailies in the common room at Cagliari’s Assemini training ground last week, the likelihood is he would have spotted his name and image front and centre. It was hard to miss.

Last Thursday, the blonde midfielder, who turns 22 at the start of February, was splashed all over the pink front page of La Gazzetta dello Sport. Then on Saturday, Sunday and Monday it was Il Corriere dello Sport. Barella is the sun around which the January transfer window is revolving in Italy. The star that shines the brightest. Currently orbiting the precocious Sardinian are Serie A’s elite and members of England’s big six.

Contemplating how much Barella may be worth in today’s inflated market, Cagliari’s art enthusiast of an owner, Tommaso Giulini said: “I’ve been trying to buy one of [Alberto] Giacometti’s sculptures for years. They go for more than €100m. How about that. Barella is our work of art.”

It was a provocation. If Sotheby’s or Christie’s were chairing the auction for Giulini they’d expect Cagliari to garner less than half that figure. That said, interest from the “DuckTales vault” that is the Premier League is managing to drive up the price with the same efficacy as one of Barella’s driving runs from midfield.

Barella isn’t tall and skinny like one of Giacometti’s bronzes but as a basketball lover he wishes he was. His mother used to take him down to the local court where he stood out as the only kid kicking the ball against the wall rather than shooting hoops. He would take his talents to the Gigi Riva academy instead where his passion for squeaky sneakers and slam dunk contests went undiminished. Barella still watches more NBA than Serie A. In fact, he named his Staffordshire Bull Terrier “LeBron” and wears the No .23 jersey when playing for Italy.

Short and compact, if you were to compare the young Italy international to a Giacometti it would definitely not be “The Walking Man.” Barella fizzes into tackles and bursts up the pitch with sudden accelerations and determined running. One of his youth coaches at international level, Antonio Rocca, likened him to a freshly popped bottle of champagne. “I take it he means I’m exuberant and never stand still?” Barella wondered. “He’s right.”

Though Cagliari born and bred, and a big fan of the team he plays for, Barella grew up in a house of Interisti and watched plenty of Dejan Stankovic. The dipping shots hit true and with power against the post, from positions outside the penalty area against Milan and Genoa this season, were certainly reminiscent of the treble-winning Serb. The Cagliari connection and shared agent (Alessandro Beltrami) have inevitably led to parallels with Radja Nainggolan too and there are some people who don’t think it will be long before they are playing together.

Barella spent some of his winter holidays in the Dolomites, staying in the same Ortisei hotel as Inter coach Luciano Spalletti. For now though, Napoli are leading the competition to sign him, motivated by a combination of things. Marko Rog and Amadou Diawara’s desire to leave for more game-time, a fading Marek Hamsik, PSG’s interest in Allan and the need to act fast to see off Premier League suitors before the player’s valuation gets out of hand, all have Napoli racing to sign the 21-year-old.

At Chelsea he has an admirer in Maurizio Sarri’s assistant Gianfranco Zola, a fellow Sardinian, who gave Barella his cup debut during his stint as Cagliari coach. As with Gonzalo Higuain, there is a sense though that the coaching staff are more enthused than the club about pushing hard for a deal despite Barella’s age profile being more in line with Chelsea’s strategy.

What appeals to all of them, though, perhaps even more than the regains, his appreciation of time and space, the pinpoint switches and the spirited nature of his performances, is the player’s character. When Barella captained his side against Milan in September he became the youngest player to wear the armband in the club’s history. He takes responsibility for the team’s penalty kicks and is not fazed by anything, raising his game consistently against the top sides and convincing those who matter that he belongs at the highest level.

His senior Italy career is a case in point. By the end of the UEFA Nations League Barella was the biggest climber in the Italy hierarchy, firmly establishing himself in the midfield with Jorginho and Marco Verratti. What had looked like a token cap to acknowledge the player’s potential and effectively say: “We’ll see you in a few years” ended with justified excitement. Barella instantly looked like he belonged and the attempts of Ruben Neves and his Portugal teammates to target and kick him out of the game at the San Siro were a major compliment and indicated just how far he has come in such a short space of time for his country. “He’s phenomenal for his age,” Roberto Mancini said.

“Mature beyond his years” is a bit of a football cliche as is the stock that coaches in Italy place on a player being settled down and undistracted by the finer things this industry offers. But Barella is already married, became a father in 2017 and hangs out with the veterans in the Cagliari dressing room. “They have kids too and the same values,” he said. And like some newly retired banker, Barella has even started collecting wine.

Having the mentality to go with the talent goes a long way to explaining the gold rush. A lot of players have one and not the other. Finding both is rare. “I’m sure that I will stay the same person no matter where I play,” he told Sportweek. “I’m not interested in buying a Ferrari or a super attic. I treat myself here and there but I don’t play football just so I can buy myself a nice car. When I earn enough to afford a Ferrari, I’ll probably get one. But I don’t live for that.”

There are other things that matter more to Barella. As a Sardinian, he wants to make his island proud “like Zola, Fabio Aru [the Vuelta winning cyclist] and Gigi Datome [who made it to the NBA and played for the Boston Celtics].” Barella riles whenever he hears the stereotypes about this jewel of the Mediterranean. “The fact they call us shepherds annoys me,” he confessed. “When I think about it though I’m proud because I think there’s a lot of dignity in milking a cow at six in the morning so that the people can have milk.”

Barella plays to give the same people a little bit of joy on a Sunday. Unfortunately the days of Gigi Riva turning down the likes of Juventus to dedicate his career to winning things with Cagliari are over. The economic stratification of the game was big then but it’s even greater now.

Meanwhile the signing of Valter Birsa and attempts to buy Nahitan Nandez from Boca Juniors signal two things: first, the continued Chievo-fication of Cagliari under Rolando Maran and secondly, the preparation for Barella’s departure, which will likely happen in the summer rather than now.

Looking out over the shimmering topaz of the Costa Smeralda, the horizon in front of him is as bright as it is broad.