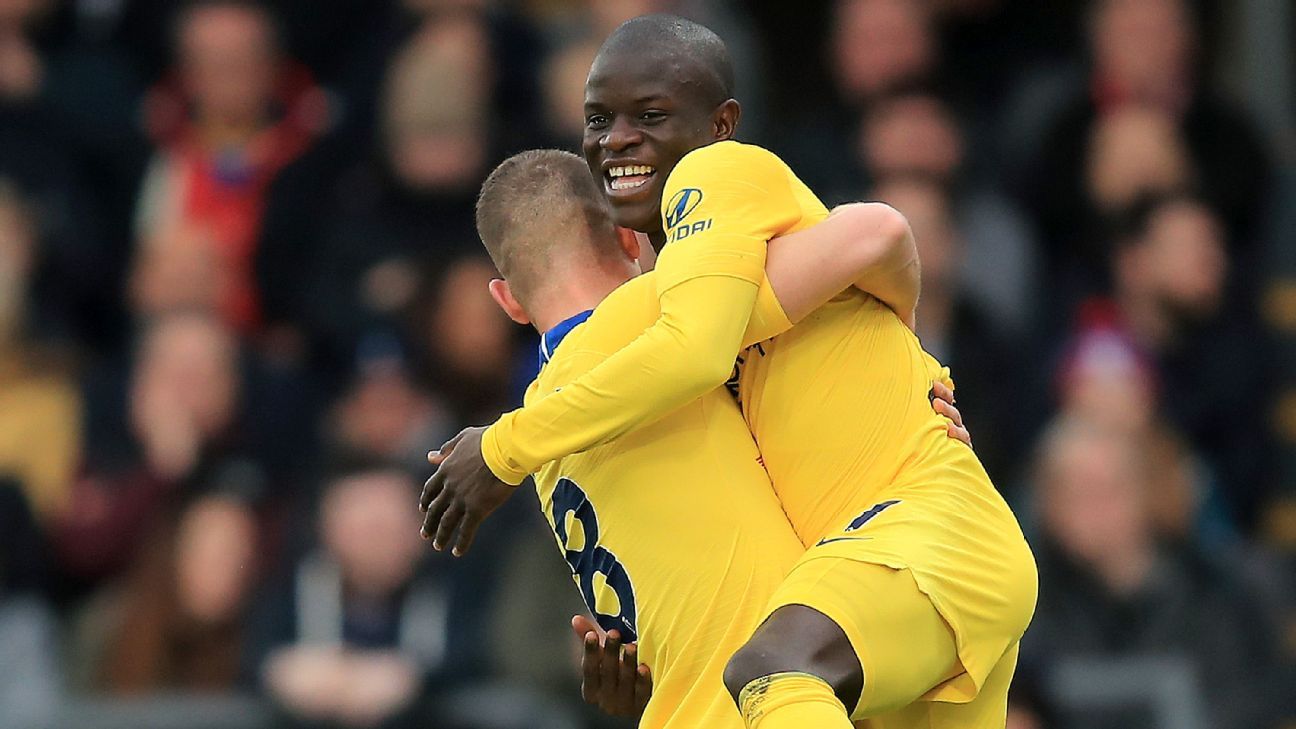 N’Golo Kante’s second-half goal gave Chelsea a 1-0 win in a drab match at Crystal Palace and took them to within a point of third-placed Manchester City ahead of City’s game at Southampton.

Maurizio Sarri’s side dominated possession in the early stages but were unable to get through Palace’s well-organised defence, Marcos Alonso booked for throwing the ball away in frustration after failing to keep it in play.

The Eagles posed their first glimmer of a threat after 11 minutes when Wilfried Zaha went down under Antonio Rudiger’s challenge, but muted appeals for a penalty were waved away.

At the other end, Rudiger met a Willian cross with a flicked header but could not generate enough power to trouble goalkeeper Vicente Guaita.

Back came Palace, and Jorginho closed down Andros Townsend as he cut in from the wing, the hosts countering to set up a shooting chance for Kante, whose effort flew wide.

Olivier Giroud fired home an angled half-volley only to be frustrated by an offside flag, and as the half-hour approached Palace scrambled clear when Eden Hazard’s strike almost found its way through to Giroud.

Jorginho blasted wide as Chelsea pressed again, and Sarri’s side won a free kick 25 yards out after a foul on Hazard, Willian’s effort hitting the outside of the post.

Moments later, Willian forced a good low save from Guaita with a sharp strike and then Ross Barkley clipped the post with an acrobatic attempt from six yards as the first half ended goalless.

Chelsea needed only six minutes of the second period to make the breakthrough, David Luiz lofting a fine pass over the Palace defence for Kante to control and fire low past Guaita, who got a hand to the ball but could not keep it out.

Palace, who offered little in attack throughout, tried to find a way back but almost conceded a second when James McArthur got the ball away after it had deflected back towards Giroud.

As the visitors continued to dominate, Cesar Azpilicueta was poised to find Giroud only for Jeffrey Schlupp to intercept, and Willian was denied by a Guaita save before Barkley’s drive was deflected wide.

Palace boss Roy Hodgson replaced Schlupp with Connor Wickham before Cheikhou Kouyate went into the book for a foul on Hazard and Giroud was denied a goal by an offside flag for the second time and was then replaced by Alvaro Morata after taking a knock on the ankle.

Hodgson made a second switch inside the final quarter of an hour as Max Meyer replaced Kouyate, but Palace continued to struggle to muster anything in the way of serious threat.

Sarri replaced Willian with Emerson and Barkley with Mateo Kovacic as Chelsea saw out the remaining minutes comfortably, Zaha and Wickham shooting over as the Eagles stayed five points clear of the relegation zone.