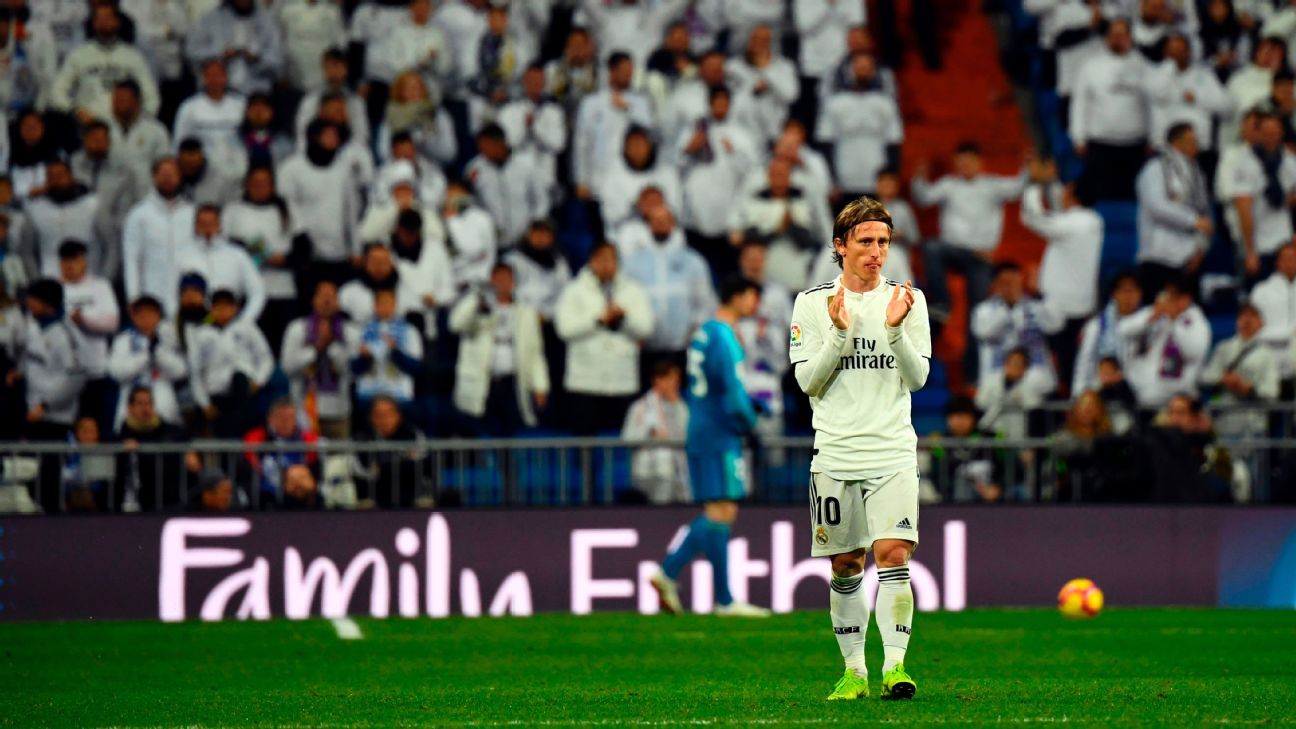 After a super-dramatic 2018, Real Madrid end the calendar year with a 1-0 home win against a poor Rayo Vallecano side on Saturday in one of the least entertaining Bernabeu occasions in many a year.

This was at least a victory to end the year with three points. The early goal was cleverly constructed and nicely taken. Marcos Llorente again showed his worth in holding midfield, with Luka Modric and Toni Kroos either side playing well too. A third consecutive La Liga clean sheet was welcome, if slightly fortunate.

This was one of those Bernabeu mismatches that in previous years ended 5-0 or 6-1 to the home side, but Madrid had just four shots on target all game — and it is now more than two decades since they have scored so few goals at this point of a La Liga season. Further proof that club president Florentino Perez should really sign a new striker in January.

6 — Results continue to be much better than performances under Santi Solari, with no real evidence that the team’s style of play is evolving under his guidance. Showed his stubborn streak by again keeping local media darling Isco on the bench for the whole 90 minutes. Will point to the three points and another clean sheet as evidence he is getting the job done.

GK Thibaut Courtois, 7 — First difficult intervention of the entire game came in added time, and luckily for Madrid he was still awake to make a double stop to deny Rayo a shock equaliser.

DF Dani Carvajal, 7 — Not overly worried in defence but not too prominent in attack either. Also hoofed the ball clear during late drama when Rayo almost scored.

DF Raphael Varane, 7 — Dealt very comfortably with all that Rayo threw at him, which was not too much really.

DF Sergio Ramos, 6 — One of those regular games when Ramos was not fully focused, allowing Rayo defender Emiliano Velazquez a free header at a corner, racing upfield in open play looking to score himself. Had the ball in net at a second-half corner, but VAR confirmed the initial offside flag.

DF Marcelo, 5 — Still way below his best form and lucky that Rayo’s Peruvian speedster Luis Advincula continually took the wrong option when he got into space. Offered little in attack either. Again whistled by a Bernabeu crowd unhappy with his contribution all season.

MF Luka Modric, 8 — Showed off his 2018 Ballon d’Or trophy to the crowd before the game, and his best performance in quite a while included a few world-class touches — including one lightning turn on the edge of the Rayo box to set up a chance Marco Asensio should have buried.

MF Marcos Llorente, 8 — With Casemiro soon fit again, this was another excellently timed performance, snuffing out any danger of Rayo counters, and using the ball in his usual intelligent and understated way.

MF Toni Kroos, 7 — Looked very sharp on his first game back after a knee injury, unlucky not to score when his 20-yard arrow off his left foot bounced off the post in first half.

FW Lucas Vazquez, 7 — Excellent run and pass created the first goal for Karim Benzema, with his hard work in defence again useful for the team, although he got away with a possible penalty concession on Rayo winger Alvaro Garcia in the first half.

FW Karim Benzema, 7 — The opener was his first goal in a month, very nicely taken after a clever run behind Rayo’s offside trap. With the job apparently done, he rarely threatened to add another afterwards, then left early with an injury that makes him a doubt for Sunday’s flight to Abu Dhabi for the Club World Cup.

FW Marco Asensio, 5 — Looking really low on confidence at the moment, had two golden moments to get a badly needed Liga goal but twice denied at close range by Rayo keeper Stole Dimitrievski. Whistled by the frustrated Bernabeu faithful when taking the wrong option on the break in the second half, and was subbed off soon after with a thigh muscle issue.

MF Dani Ceballos, 7 — Replaced Asensio with 20 minutes remaining, and almost set up a chance for Lucas with a cleverly slid pass late on.

FW Vinicius Jr, N/R — At least offered pace and energy when replacing Benzema up top, although did not get a chance to score.