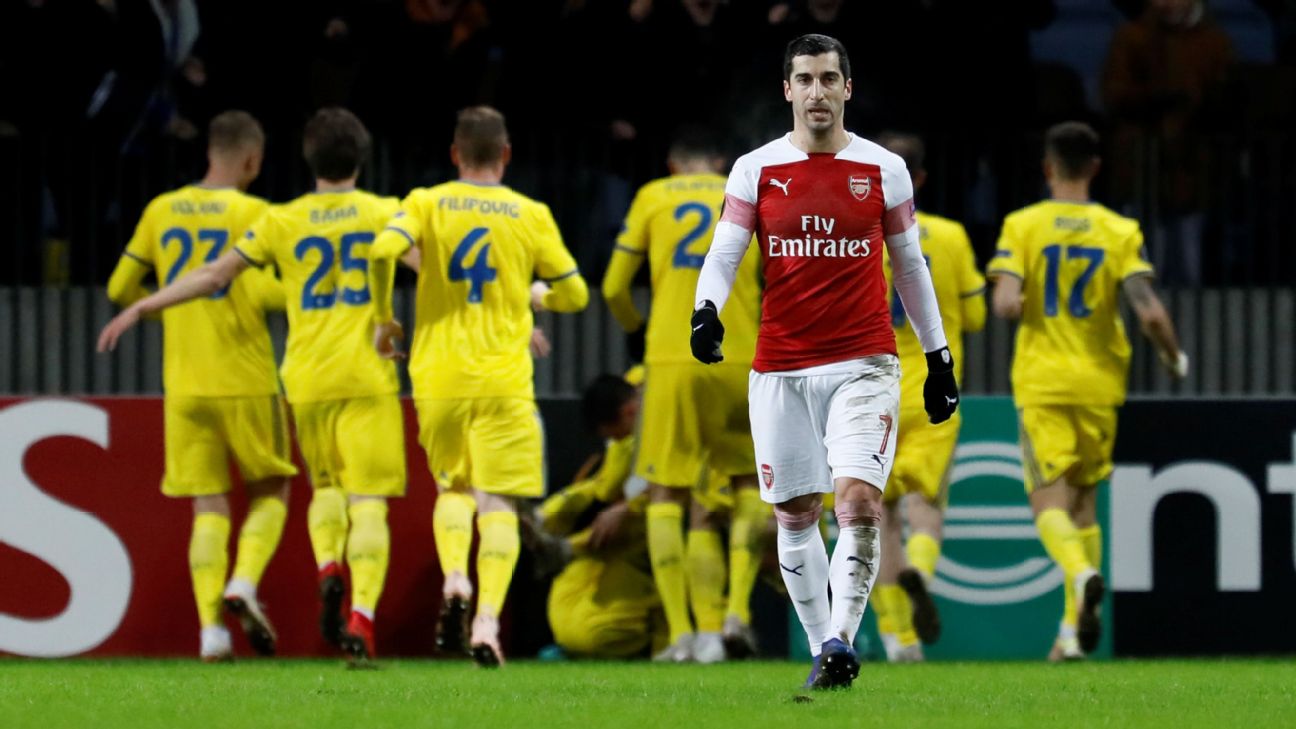 Arsenal were victims of a shock 1-0 defeat to BATE Borisov in their Europa League round-of-32 first leg on Thursday, with fans now beginning to wonder precisely where Unai Emery is leading this team.

There really is nothing positive to say about this dreadful Arsenal display.

Where to begin? This was a humiliating result for Arsenal, and a startling reminder of quite how far their stock has fallen in Europe. While they may well be strong enough to overturn the deficit and qualify, it will still go down as one of their most disappointing performances this season.

Special mention should be reserved for Arsenal’s set-piece delivery, which was absolutely dire. Time after time they failed to beat the first man.

4 — This was not a good night for Emery. With the club desperate to return to the Champions League, this competition is of paramount importance, and the Gunners have left themselves with a big job to do in the second leg.

GK Petr Cech, 6 — He had no chance with the opener, and made a crucial late intervention to prevent BATE from grabbing an embarrassing second.

DF Ainsley Maitland-Niles, 5 — Although he started as a right wing-back, Maitland-Niles had very little defensive responsibility in the game. His job was to get forward and apply pressure on the right flank. He worked hard enough, but his final ball was sorely lacking.

DF Shkodran Mustafi, 5 — The much-maligned central defender looks like a player bereft of confidence. He can barely put a foot right at the moment, and it seems inevitable that he’ll be dropped when Sokratis Papastathopoulos is fit again.

DF Laurent Koscielny, 6 — Sometimes you wonder just how bad this Arsenal defence would be were it not for Koscielny. At this rate, you couldn’t blame him for seeking a summer move back to France.

DF Nacho Monreal, 5 — He’s been an incredibly consistent player for Arsenal in the past couple of years, but there are signs that Monreal may just be creaking. He appears to have lost what pace he had.

DF Sead Kolasinac, 6 — What a conundrum Kolasinac is. Going forward, he’s so frequently Arsenal’s most penetrative player. Once again, his runs down the left proved extremely dangerous. However, defensively he is far less convincing. His failure to challenge properly for a set piece is what ultimately granted BATE the opening goal. He also had two pretty decent chances to score, but missed both.

MF Granit Xhaka, 6 — The Swiss international was booked early on, and perhaps that inhibited his performance somewhat. It was no great surprise when he was replaced by Lucas Torreira.

MF Matteo Guendouzi, 5 — Inconsistency is almost inevitable in young players, and this was a match in which it was apparent that Guendouzi still has plenty to learn. His defensive weaknesses were occasionally exposed, with BATE breaking past him too easily on several occasions.

MF Henrikh Mkhitaryan, 5 — After making a strong return at Huddersfield, this was a disappointing display from Mkhitaryan. He struggled to impose himself on the game and was knocked off the ball far too easily. It was quite surprising he remained on the pitch for as long as he did.

MF Alex Iwobi, 6 — The Nigerian tends to have one good game followed by one bad one. After a decent showing at Huddersfield at the weekend, he was poor on this night. He seemed more affected than most by the bumpy pitch.

FW Alexandre Lacazette, 4 — In the first half, the Frenchman missed a great chance to head Arsenal in front. He thought he’d equalised early in the second half, but his close-range finish was ruled out for offside. He was then given a straight red card for swinging an arm at an opponent. All in all, this was not his night.

MF Lucas Torreira, 6 — Came on for Xhaka but did little to change the pattern of the game.

FW Pierre-Emerick Aubameyang, 5 — The striker came on for Maitland-Niles but looked out of sorts on the right wing.