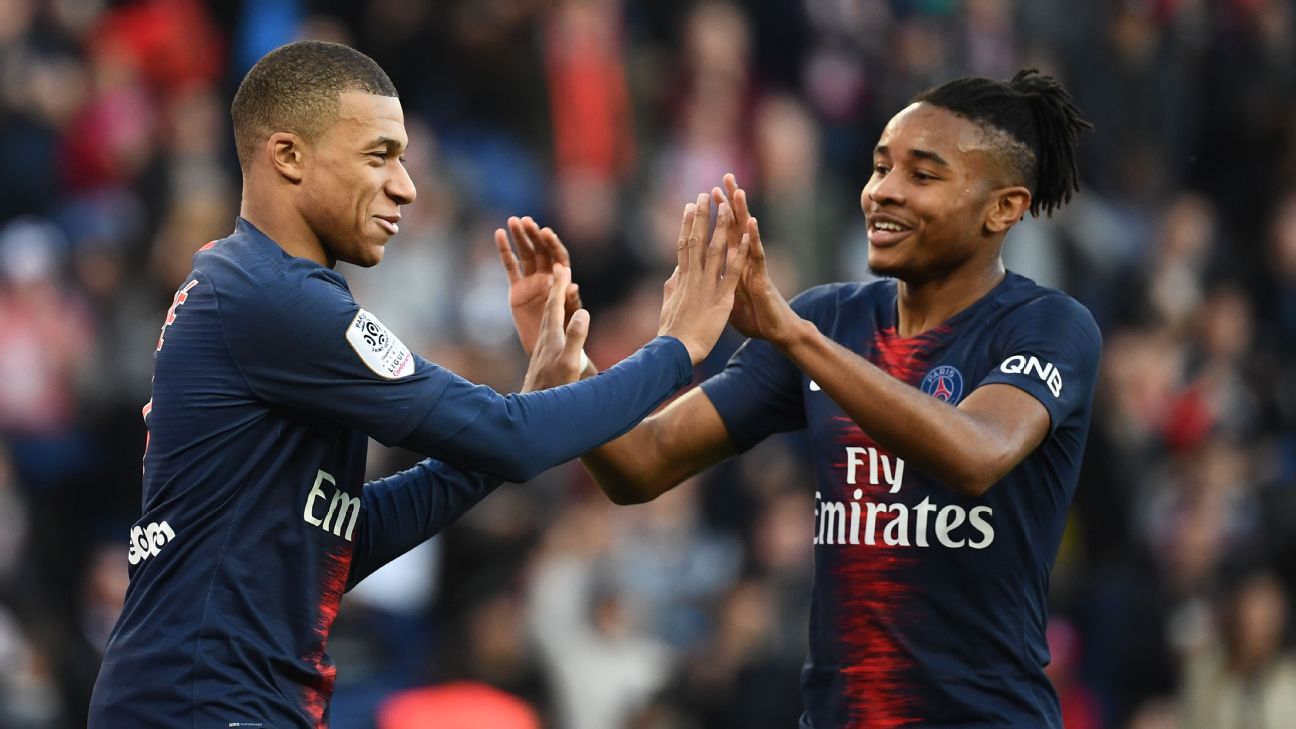 Paris Saint-Germain opened up a provisional 17-point lead at the top of Ligue 1 with a 3-0 win over Nimes at Parc des Princes on Saturday. Christopher Nkunku opened the scoring in the first half before Kylian Mbappe added a brace in the second for Thomas Tuchel’s men.

Another match, another win: PSG are now up to six consecutive victories across all competitions. It took a while but the French champions eventually broke down a tough Nimes side and it took an Mbappe brace to make sure of the result. The France international continues to learn to play as the No. 9 in Edinson Cavani’s absence and this spell will benefit Tuchel in the future.

There were no major negatives as Tuchel was able to rest some players, notably Angel Di Maria, and although it took a while, PSG did eventually find a way past a stubborn Nimes side multiple times. Being made to work hard for a win is no bad thing.

6 — Tuchel went with two up top to afford Di Maria and Julian Draxler a breather and although the 4-4-2 formation made hard work of Nimes, even if Mbappe had two goals ruled out, it eventually got the job done.

GK Alphonse Areola, 7 — Made some important saves in both halves to earn his eighth Ligue 1 clean sheet this season.

DF Dani Alves, 6 — Utilised at right-back with Thomas Meunier surprisingly left out after being deemed fit, it was a solid enough 72-minute outing.

DF Marquinhos, 7 — Paired well alongside captain Thiago Silva and dealt well with any dangers that were presented.

DF Thiago Silva (c), 7 — The skipper was calm and collected with Marquinhos by his side and the pair did not give too much away to Nimes.

DF Juan Bernat, 7 — Enjoyed a decent amount of space when he roamed forward, so it was no surprise that he assisted Mbappe’s first of the match before he was booked.

MF Christopher Nkunku, 8 — His most impressive performance in quite some time was capped with a goal and also featured a key pass to release Mbappe for his second strike. It could prove to be a turning point.

MF Leandro Paredes, 6 — Combative in his full home debut, he was cautioned during the first half and was disciplined for the remainder of the encounter.

MF Marco Verratti, 7 — It took a while for him to get going but once he did, he was very good. His lofted assist for Nkunku’s opener, in particular, was majestic.

MF Layvin Kurzawa, 6 — Handed a more attacking left-sided berth, which actually suits his style of play better than the left-back role, he was consistent over the full 90 minutes and that will have pleased Tuchel.

FW Kylian Mbappe, 8 — Two goals that counted, another two chalked off for offside and a yellow card for taking exception to one of those strikes being take away. There’s never a dull moment with him, and he is a sharper goal threat with each passing game.

FW Eric Maxim Choupo-Moting, 6 — Found the going tough at times, particularly in front of goal, but worked hard to be create chance for others and that deserves recognition.

DF Colin Dagba, NR — Replaced Alves for the final 18 minutes and was solid as he continues to grow through Tuchel’s faith in him.

MF Moussa Diaby, NR — Given 11 minutes at the end in place of Choupo-Moting, he helped to stretch the Nimes defence and was the alternative for Nkunku in the build-up to what was ultimately Mbappe’s second goal.

DF Stanley N’Soki, NR — Took Verratti’s place for the final 10 minutes as PSG switched to a more defensive, counter-attacking system that resulted in the third and final goal.