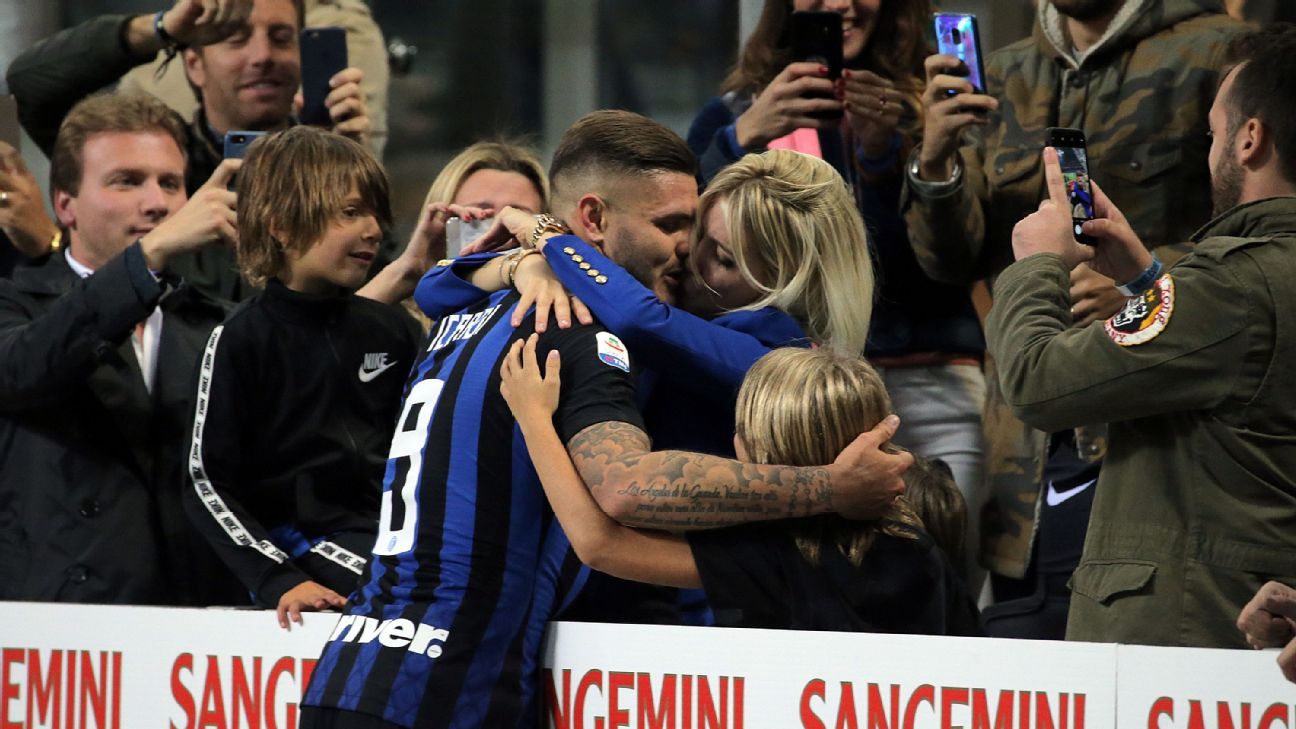 Napoli owner Aurelio De Laurentiis never misses a chance to have a pop at his old coach Maurizio Sarri and the club’s trip to Inter Milan on Boxing Day (live on ESPNews at 2.30 p.m. ET) provided an opportunity that he wasn’t prepared to pass up.

Reflecting on the summer of 2016 when Juventus had paid Gonzalo Higuain’s €90 million buy-out clause and deprived Napoli of the league’s top scorer, De Laurentiis recalls asking Sarri: “Who shall we buy then?” as though some retail therapy might help him get over losing El Pipita. “He said he didn’t want to know about it,” De Laurentiis told Il Corriere del Mezzogiorno.

The striker that De Laurentiis specifically had in mind was Inter’s lethal No. 9: Mauro Icardi (who placed tenth in 2018’s ESPN FC 100 for strikers). “I went to Milan to talk to his wife [and agent, Wanda] and I offered €65m. In the end it didn’t come off, so amen,” he said.

There was talk that the film producer offered Wanda a part in one of his movies as a sweetener for the deal, but it didn’t work and his studio would have to find another leading lady. Wanda later told La Gazzetta dello Sport: “It’s true, Aurelio did offer me a role. He knew I acted and that everyone in Argentina knows me. But contrary to what was written in the papers it was not connected to Mauro’s [proposed] move to Napoli.”

Famous for making Christmas specials — known as cinepanettone — Wanda and the genre were mentioned in the same breath again this week after a series of box office performances on social media and TV caught the spotlight.

As in 2016, when De Laurentiis was encouraged into thinking Icardi was seriously considering his future at San Siro, Wanda is agitating for a new contract for her husband again.

The timing then felt cynical as Inter had just been sold to Suning, run by the billionaire Zhang Jindong, and there were a number of new signings coming in on more money in positions unlikely to be as decisive for the team as Icardi. Then there was Higuain’s move to Juventus and the awareness that Napoli were on the rebound. Wanda couldn’t have asked for more leverage.

Last week, a new series of what Il Corriere dello Sport is calling “House of Icards” began with Wanda depicted as Claire Underwood. Two days after Inter’s Champions League exit, she tweeted: “It’s 12.30 a.m. and I am still here reading the contract extension.” Which extension that was Wanda left to the imagination but naturally everyone thought she meant Inter. Again the timing felt off. The Nerazzurri had just experienced major disappointment; the fanbase, not to mention everyone at the club, was still hurting. It was not the moment to be seen to be asking for a raise.

Earlier this week it emerged on Instagram — where else? — that the paperwork Wanda had been reading was perhaps not from Inter after all as Icardi “finally” penned a new nine-year deal with Nike. Yet multiple reports suggested that Inter were still confident Icardi would extend his current contract, which doesn’t expire until 2021, with the club and accept a pay rise to €6m a year net.

But it wasn’t long before Interisti were made to feel nervous again as Wanda quickly set everybody straight from the sofa of a football talk show that she guests on every week. “We’re far [from an agreement],” she said. “Or maybe I should say we’re not as close as they say we are. The front page of La Gazzetta dello Sport annoyed me.”

The headline the following day was probably not to her liking either. “A chaos called Wanda” — the motivation for which was the confirmation she gave to a story that had been doing the rounds over the summer claiming how Inter’s bitterest rivals Juventus were serious about moving for Icardi. “To convince me, Juventus told me he would have partnered Cristiano Ronaldo and in the end [the Portuguese] arrived,” she said. “Mauro was the one to refuse, he turned down more money.”

Since then — but famously also last summer when Wanda posted a picture on Instagram of a zebra while on safari — the regular and subliminal appearance of black and white in her social media posts never fails to cause a stir. Inter’s sporting director Pier Ausilio said all he could do was “laugh” when he heard what Wanda had said on TV. But the club is not seeing the funny side.

“I’m not interested in cinepanettone,” he added while everyone around him started reaching for the popcorn. The club’s new chief executive, Beppe Marotta, who was at Juventus until September and admitted “an inquiry” had been made about Icardi (though without a sit-down ever happening) advised: “A little more silence would do everyone good.” Particularly at the moment as Inter have won just two of their last nine games — both against relegation battlers — and dropped points to bottom side Chievo at the weekend.

Inter are eight points behind second-placed Napoli and must avoid getting dragged into an increasingly fierce contest for fourth spot. The risk at the moment that the club start to look like a circus as news of Radja Nainggolan’s nights at the casino and cloned chequebook compound what has been an overly dramatic few weeks on-and-off the pitch.

Inter know Icardi wants to stay. “This is my home,” he said, not for the first time, on the way into the club’s Christmas party. Wanda has also admitted that Inter is family, reminding everyone of the pictures of her crying at San Siro when the team were eliminated from the Champions League.

But Wanda also knows Icardi’s worth. Making his debut in the Champions League this season, he took to it like a duck to water, scoring four times in six games. The reigning Capocannoniere, he has topped the scoring charts twice and, at 25, is already ninth on the all-time list in Inter’s history. Recently described by Spalletti as the “perfect striker,” he is no longer just a fox in the box either, varying his game and involving himself in the build-up like never before. Six years younger than Higuain, who is currently out of sorts and on an eight-game scoring drought on loan at AC Milan, you can see why Wanda is curious that the Argentine gets paid double what her husband does.

In some respects Inter are in no rush. There is still two-and-a-half years to run on Icardi’s existing deal. But within the small print is a buy-out clause for a bargain €110m, which is actionable between the end of the season and mid-July for foreign buyers. As someone famous for taking advantage of them and refusing to let anyone at Juventus have one, Marotta will be keen to remove that clause out of any new deal.

For now the brinksmanship continues and from the outside looking in De Laurentiis surely can’t help but envy the suspense, the drama and sheer entertainment value of it all. If he can’t buy Icardi, maybe he should just pay for the film rights instead.