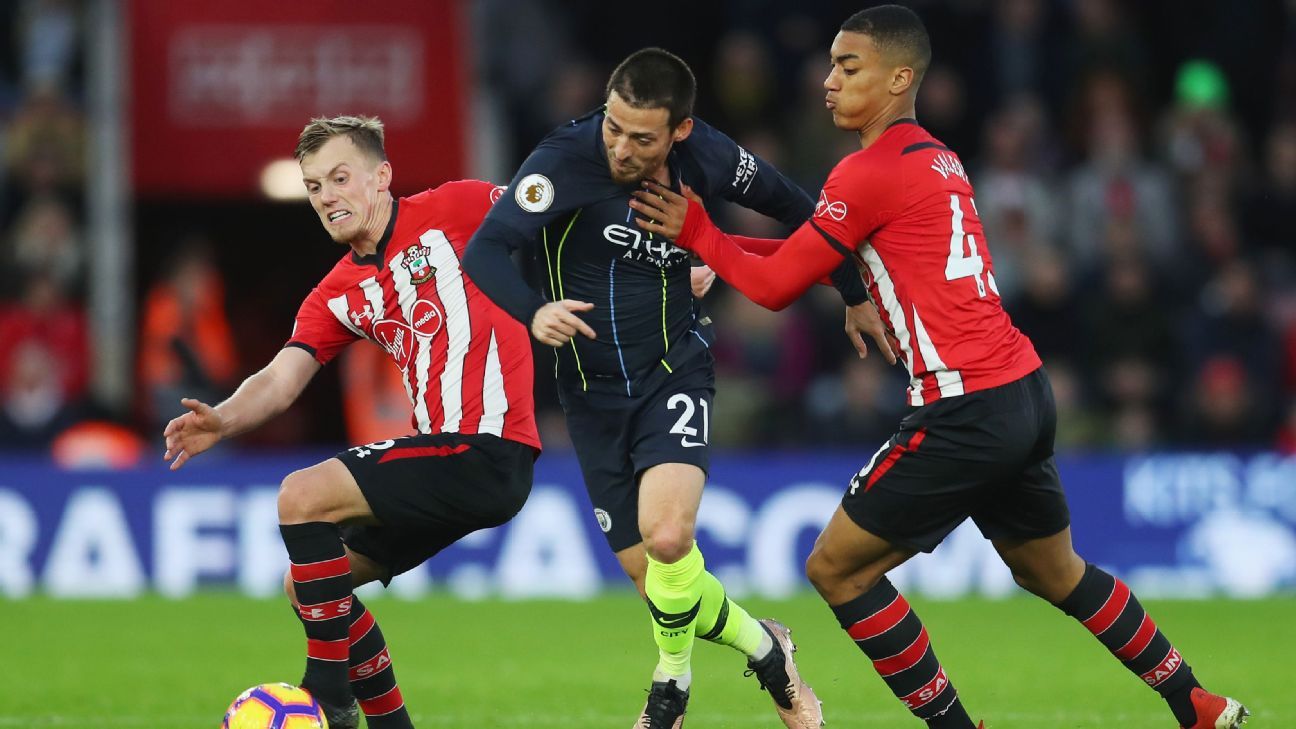 SOUTHAMPTON, England — Manchester City moved back up to second in the Premier League by ending their mini-slump with a 3-1 win at Southampton. After missing a glut of good early chances, City took the lead through David Silva. The Saints were gifted a way back into the game when Pierre-Emile Hjobjerg latched onto Oleksander Zinchenko’s poor touch to fire in an equaliser. But City struck twice before half-time through a James Ward-Prowse own goal and Sergio Aguero’s header to cut Liverpool’s lead at the top to seven points after back-to-back defeats.

This is a fifth successive match when City have taken the lead and been pegged back — this time they showed the spirit champions need to claim all three points. The Saints were level for just eight minutes before two goals in a minute from the visitors killed off the contest. Crucially, City stuck to the shape and gameplan that has been so effective for them during Pep Guardiola’s reign — pressing high, winning the ball back and cutting open the opposition with precision passing and movement.

City extended their run without a clean sheet to 10 games and this won’t have given them confidence that they can keep out Liverpool in their crucial top-of-the-table clash at the Etihad Stadium on Thursday. The left-back position is a major problem with Benjamin Mendy injured and Fabian Delph suspended. Oleksander Zinchenko’s error could have proved costly against Southampton and facing Mohammed Salah will be a much bigger step-up in quality for the Ukrainian.

8 — Guardiola staunchly believes in his philosophy of attacking football and he made it clear ahead of the game that he isn’t about to change. The Catalan coach now has to give that belief back to the players after falling off the pace of leaders Liverpool. His side looked much more like their old selves when they pulled apart the home side in the second half with the comfort of a two-goal advantage,

GK Ederson, 7 — Great low save from Austin’s header but had no chance with Hojbjerg’s emphatic strike. So cool with some of the touches in his own six-yard box when he was under pressure from Southampton attackers.

DF Danilo, 7 — Benefitted from a rare second successive start and offered plenty of threat raiding down the right wing.

DF Vincent Kompany, 6 — First Premier League start since October but couldn’t help claim that elusive clean sheet. He was given a couple of problem moments from Austin.

DF Aymeric Laporte, 7 — Not helped by having Zinchenko outside him, who looked uncomfortable defensively, but mostly steady.

DF Oleksander Zinchenko, 5 — Horrible moment for Southampton’s goal and could have given away a penalty with a clumsy challenge on Ward-Prowse. Redeemed himself with the cross for Aguero’s but his errors could have been costly.

MF, Fernandinho, 7 — Showed exactly what City have been missing in the centre of midfield when he was absent for the back-to-back defeats to Crystal Palace and Leicester. Restricted the Saints’ counter-attacks and linked the midfield well with his crisp passing.

MF Bernardo Silva, 7 — Great work for the opening goal when he teed up his namesake. Seemed to revel playing back alongside the Spaniard in attacking midfield.

MF David Silva, 8 — Offered City much control when they were going forward. Unusual lack of composure when he fluffed an early chance but made up for it with a neatly taken opener.

FW Riyad Mahrez, 6 — Lots of threat by sticking to the right-hand touchline but chose the wrong option when he curled an effort off-target when City overloaded in attack and missed another one-on-one.

FW Sergio Aguero, 7 — Missed an early chance from close range that he would normally finish but made up for it with a clinical header just before half-time. His first Premier League goal in six weeks.

FW Raheem Sterling, 7 — Had a bit of luck when his cross was turned by Southampton defender Ward-Prowse for the crucial second goal and then came to the fore in a lively second half performance.

FW Gabriel Jesus, N/R — Didn’t have much of an impact.

FW Leroy Sane, N/R — One good run but very little time to do much.