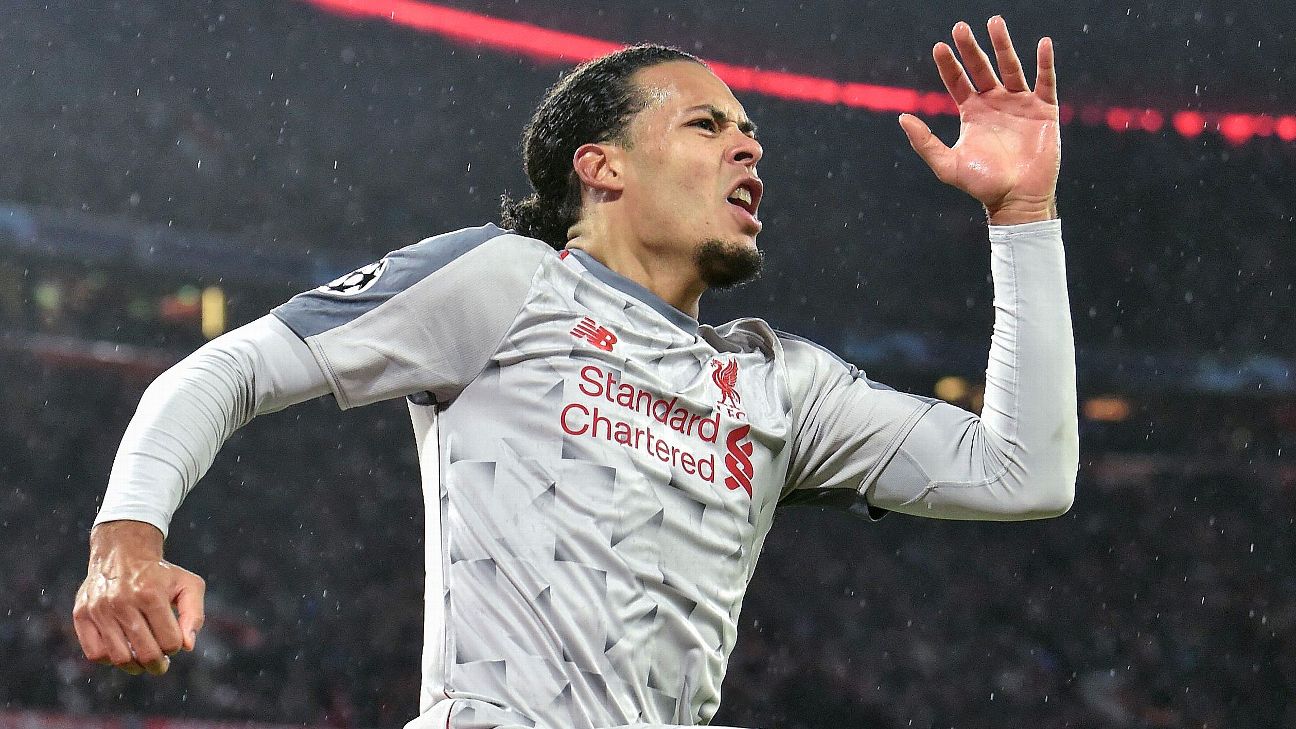 MUNICH — It takes an extra-special player to inspire a team to Champions League glory, and during this decade, it has usually been Cristiano Ronaldo or Lionel Messi who has been the difference in terms of elevating his side above the rest. Only twice since 2010 has a team without Ronaldo or Messi won the Champions League — Chelsea in 2012 and Bayern Munich in 2013 — and it will take a great team, or an outstanding player, to prevent one of them from claiming another winners’ medal this season.

But in Virgil van Dijk, Liverpool possess a player who has become so important and influential to Jurgen Klopp’s side that he could prove to be the extra-special player who makes all the difference for the Anfield outfit this season, both in the Champions League and back home in the Premier League. John W. Henry, Liverpool’s principal owner, has no doubt about Van Dijk’s importance, with the American retweeting a tweet after this game that said, “75 percent of the Earth is covered by water. The other 25 percent is covered by Virgil van Dijk.”

Despite all the focus on Manchester City chasing a quadruple, Liverpool are still pursuing a Premier League-Champions League double — something not achieved since Manchester United managed it in 2008 — and with Van Dijk in such peerless form, you cannot write them off.

Sadio Mane claimed the headlines in the Allianz Arena with two goals, either side of Van Dijk’s 69th-minute header, that helped Liverpool seal a 3-1 round-of-16 second-leg win against Bayern Munich, which clinched a place in Friday’s quarterfinal draw. But while the Senegalese forward maintained his hot streak by taking his recent goal haul to 10 in 10 games with his double against Bayern — and remarkably half of all 16 goals the Merseysiders have scored in their eight games since the start of February — the real star of the show for Liverpool was Van Dijk.

They might have kept a clean sheet against Bayern at Anfield three weeks ago, despite being without the suspended Van Dijk, but the 27-year-old’s return to the heart of the defence for this game was transformative for Liverpool. He was the orchestrator in Munich and looked like a teenager playing among 10-year-olds, so comfortable was he on the ball.

Van Dijk, who became the world’s most expensive defender when he signed from Southampton last January for what now seems a bargain, at £75 million, quite simply makes his teammates better when he plays. Joel Matip was a centre-half struggling to earn Klopp’s trust prior to Van Dijk’s arrival, but he is now a supremely confident central defensive partner for the main man, and his own-goal against Bayern, when he could either divert the ball into his own net or leave it for Robert Lewandowski to score, should not take the shine off his performance.

Van Dijk oozes confidence on the ball, he organises his defence and those in front of him, and opponents are so concerned by his ability on the ball that they leave space for other Liverpool players by spending so much energy attempting to starve the former Celtic defender of possession.

Some might argue that Mane or Mohamed Salah are more likely to be Liverpool’s match-winners in their quest to win a sixth European Cup this season, but Van Dijk is the player who provides the platform for the forwards to perform, and that is why he is becoming as important to Liverpool as Ronaldo is to Juventus (and was to Real Madrid) and Messi is to Barcelona.

Right now, he is the best defender in the world, with nobody anywhere questioning his value. Liverpool got precisely what they paid for: the best.

If Liverpool win the Premier League this season, it will be down to the defensive stability that has been instilled by Van Dijk — they have kept 17 clean sheets in 30 games — but his contribution in the Champions League has been more subtle. He has brought the same defensive organisation, but with more time and space to use his ball-playing abilities, he has also enabled Liverpool to be more dynamic playing out from the back.

His quality shined even more in contrast to Bayern’s defensive pairing of Mats Hummels and Niklas Sule. Hummels reads the game well, but his lack of pace is his and Bayern’s Achilles’ heel, while Sule is strong and athletic but cumbersome with the ball at his feet. Van Dijk possesses all of the strengths of Hummals and Sule but none of the weaknesses, and he did not give Lewandowski an inch of space all night. He also scored a headed goal, Liverpool’s crucial second, prompting Klopp to highlight his immense value to this team.

“Virgil gives organisation on set pieces, and he is dangerous,” Klopp said with some understatement. “He is a massive threat. He was so strong, so important to us, but he can play better than he did [on Wednesday]. He is still young enough to get better.”

Liverpool, like Van Dijk, also have plenty of scope to develop and improve, and that is why they have a real chance to win the Premier League, Champions League or both this season. But if they do go all the way in the Champions League, nobody will be more important to them than Van Dijk.