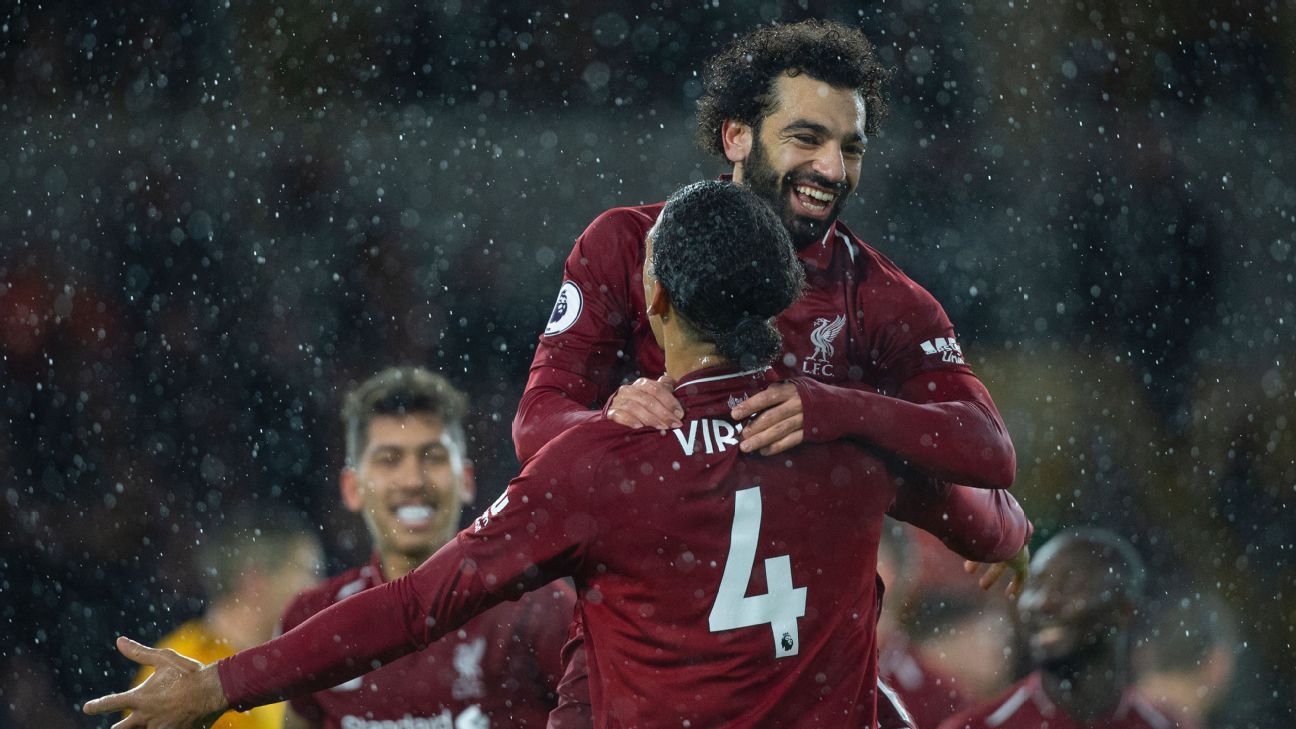 To give you a quick peek behind the curtain, this section was written at about 3:50 p.m. on Saturday afternoon, before all but two of the weekend’s games had even reached the second half. But was there really going to be a better goal than Andros Townsend’s strike against Manchester City?

“I actually want to score more of the scruffy goals that get you five extra a season, rather than one amazing goal every three or four months,” Townsend told the Daily Mail last year.

Objective failed, but we’ll let him off for now.

Team of the weekend

They’re the real thing, Liverpool. Only two teams in the last decade have been top of the Premier League at Christmas and not gone on to win it: they’ve both been Liverpool, but the surprise with the teams in 2008-09 and 2013-14 was not that they relinquished top spot, but rather that they were there at all.

This time there is some surprise, simply because so many people believed Manchester City were too good, but more than before you sense there’s something substantial about this team, that Jurgen Klopp has consciously and methodically built something rather than previous managers happening upon some form of success.

This is a brilliant collective beyond the first XI, and they’re at the very least pushing a team that was considered unassailable for the title. Bravo, Liverpool. Bravo.

Result of the weekend

Finally, Roy Hodgson gets a good result for Liverpool. When Ilkay Gundogan gave Manchester City the lead in the 27th minute on Saturday, it felt like another routine afternoon and a question of by how much they would fatten their goal difference, rather than whether they would beat Crystal Palace.

The question is whether you can write this off as an anomaly or as a previously unseen sign of City’s fragility. The temptation is to say the former, but this is their second defeat in the last three league games.

Are City starting to get complacent? Did even they get caught up in the idea they were going to win this title by about a billion points? Pep Guardiola’s public statements earlier in the season, often maintaining they could have done better in games they won handsomely, seemed to be designed to combat that, but perhaps it was inevitable.

City are still favourites to win the title. But they’ve shown enough weaknesses to suggest they aren’t quite as imperious as we might have thought.

Impact of the weekend – part one

One of the most notable things about Ole Gunnar Solskjaer’s comments after his Manchester United team thrashed Cardiff on Saturday was the repetition of the simple phrase “they’re good players,” said as if he was pointing out something that nobody else had spotted.

And in a way, that was the case. His predecessor Jose Mourinho had spent the last couple of years either giving the impression or outright stating that he didn’t think much of his squad, that United’s failure to progress was not his fault, and that he could do little more with the tools at his disposal.

“Playing with freedom” is an easy thing to say to fit the narrative of an unpopular manager being replaced by a popular one, and it feels like an insubstantial platitude, but there is actually something tangible to it. Mourinho’s negativity became more than simple criticism of his team and more a malignant force that inevitably will have impacted on the performances of his players.

In retrospect, the end for Mourinho should probably have been after United’s defeat to Brighton last season when, seemingly disgusted with the performances of Anthony Martial and Marcus Rashford, he said “now you know why” he always picked Romelu Lukaku over those two. To publicly disparage two such terrific young talents was unforgivable, and if he has any self-awareness at all he’ll ponder why they played with such skill and expression the second he departed.

Impact of the weekend – part two

Danny Ings now has seven goals in 12 starts for Southampton this season. Other things will have to continue improving around him, but if he keeps this pace up to complement Ralph Hasenhuttl’s tactics, then not only will Saints stay up comfortably but his case for a call-up to the England squad will become impossible to argue against.

Concern of the weekend

In isolation it would be tempting to not be too concerned about Chelsea’s defeat to Leicester: they were unlucky in front of goal, and a couple of shots gone an inch or two the right way then they would have strolled to a comfortable victory.

But a pattern is emerging. For the third time this month, Maurizio Sarri’s post-match comments have included a lament about how his side controlled the game for about an hour, but then lost their concentration and allowed their heads to drift. They got away with it against Brighton (just), but not against Wolves and now not against Leicester.

Afterwards Antonio Rudiger seemed disgusted, declaring the result and performance a “disaster” and perhaps most troublingly ascribed it to a “lack of mentality.” Perhaps more than finding a reliable centre-forward, Sarri’s biggest task for the second half of the season will be to fix that.

Coincidence of the weekend

Was it a coincidence that, a day after Jamie Vardy declared Claude Puel’s tactics don’t really suit him and stories emerged that the Leicester manager’s job was under threat, that Vardy scores a classic “Vardy” goal? Quick passing, in behind the defence, decisive finish.

Perhaps it is a coincidence. But if it gets Leicester winning and Vardy scoring again, few there will care.

Comparison of the weekend

While this is not to say Everton were wrong in appointing Marco Silva, it is worth pointing out that after being so comprehensively blown away by Tottenham, they are a point and two places worse off than they were at the same stage last season. A season universally written off as a shambles.

Errant complaint of the weekend

Sean Dyche’s rant about diving after Burnley’s defeat to Arsenal was more or less correct, even if his contention that defenders should be less likely to go down easily than forwards is drenched in false machismo.

Of course, it would be slightly easier to take from a manager whose team didn’t flagrantly waste time against Tottenham last weekend, or who wasn’t managing Ashley Barnes, who stamped on Matteo Guendouzi’s chest. Right message, perhaps, but from the wrong messenger.