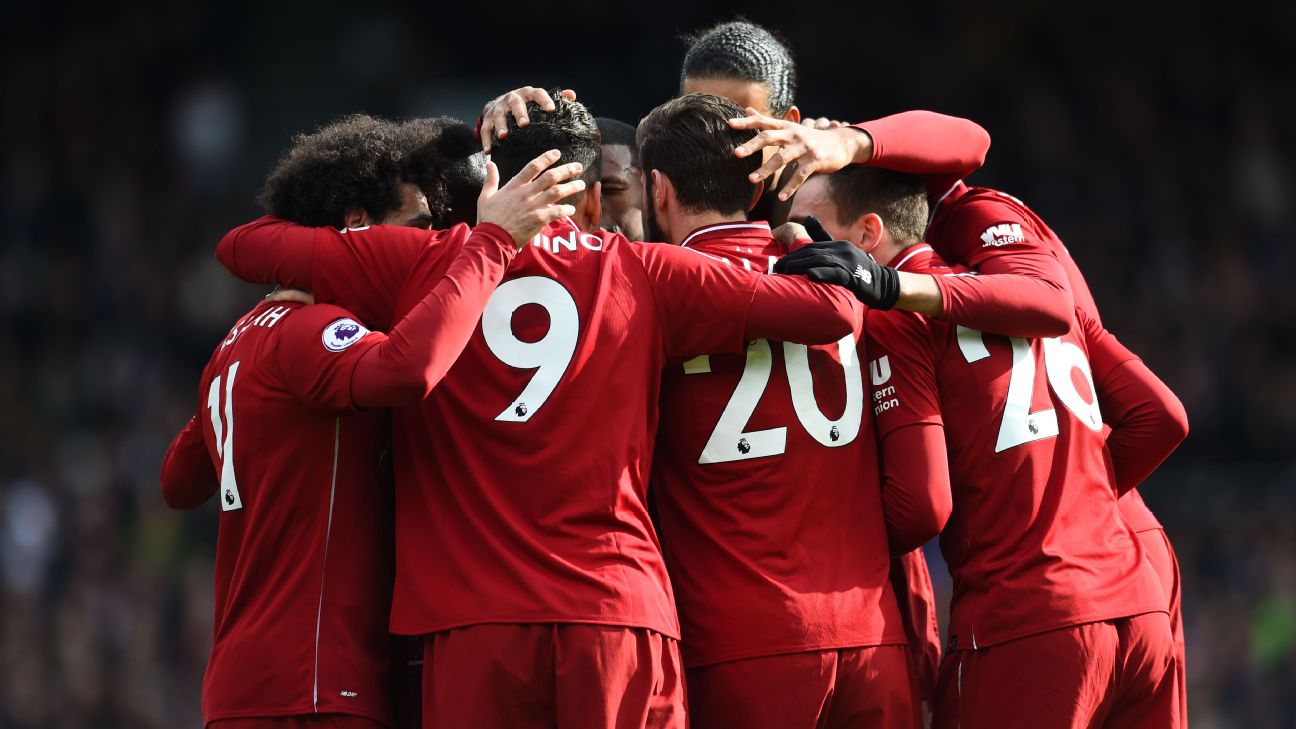 In practice, it was considerably more complex. This turned into the archetypal Premier League test: away to relegation strugglers fighting for their lives, in a tight ground with home supporters on top of the players, in horrendous conditions that involved swirling wind, torrential rain, blasts of hailstones and occasional bright sunshine. Liverpool just about got through it, winning 2-1 at Fulham thanks to James Milner’s late penalty.

The old cliche suggests that the sign of a good team is winning without playing well; the modern statistical analysis suggests that this is completely untrue, and that continually winning without playing well suggests a slump in form is around the corner. Liverpool must hope that this display is a hangover from their form over the past couple of months, rather than a preview of their performances to come in the run-in.

This was a surprisingly flat showing from Liverpool against a notoriously open Fulham side, who at least got men behind the ball and largely remained compact. Mohamed Salah still looks threatening rather than genuinely decisive down the right flank, surprisingly failing to trouble Fulham left-back Joe Bryan. Roberto Firmino dropped deep to provide some creativity from midfield, but his touch was lacking. Adam Lallana, starting in central midfield again after his fine display in last weekend’s 4-2 win over Burnley, was industrious but not overwhelmingly incisive.

And that essentially left Sadio Mane to provide the breakthrough for Liverpool, and the Senegalese international responded by providing the game’s two key contributions. First he darted into the box to crash home Firmino’s pull-back for Liverpool’s opener. Then, after a mix-up between Virgil van Dijk and Alisson had let ex-Reds forward Ryan Babel in for the equaliser, it was Mane who won the crucial penalty, after he made a nuisance of himself inside the box and was hauled down by Fulham goalkeeper Sergio Rico. Milner calmly scooped the spot kick down the middle, which sparked wild celebrations in front of the home crowd.

But there are some concerns. Alisson and Van Dijk, the two signings widely credited with turning Liverpool into serious title challengers, were caught out for Fulham’s goal; as was Milner, who eventually proved the matchwinner, but it was his wild slice into the air that put Babel through. “I asked Milner to come on and calm down the game!” Jurgen Klopp laughed afterwards. “Without him, it’s 1-0.”

“The reaction of my players was a really good reaction,” Klopp continued. “It was not a perfect football game in a difficult week for us, but it was a sensational result. We are not showing the nerves you are all expecting from us.”

That grand analysis — “sensational” — was said in the context of his feeling about the game overall; Liverpool struggled because they were recovering from their trip to Bayern Munich, and because, Klopp insisted, Fulham are a very good football side. His assessment of the home side seemed a touch generous, but then Fulham’s next opponent is Manchester City; why not give the Cottagers a confidence boost, and the belief they can win next time out?

This was, at least, a brighter performance from Fulham despite the late defeat; they were largely organised without the ball, which has been their major shortcoming this season.

“We’ve worked all week on coming up with a game plan which the guys have been superb in understanding, applying themselves daily, they’ve been first class,” said caretaker manager Scott Parker afterwards. “As long as the players have the same focus and the same determination [ahead of the Manchester City game] I know as a team we’ll be in a better place.”

But you sense that Manchester City won’t struggle like this. Pep Guardiola’s side are superior at taking the game to the opposition and converting their possession dominance into outright goal-scoring opportunities, largely thanks to the likes of David Silva, Bernardo Silva and Kevin De Bruyne. That remains the area where City have a distinct advantage over Liverpool.

Liverpool might be winning without playing well, but City are winning while also playing well. Despite the old saying, and despite Liverpool returning to the top with this victory, it’s City who look better placed for the title.