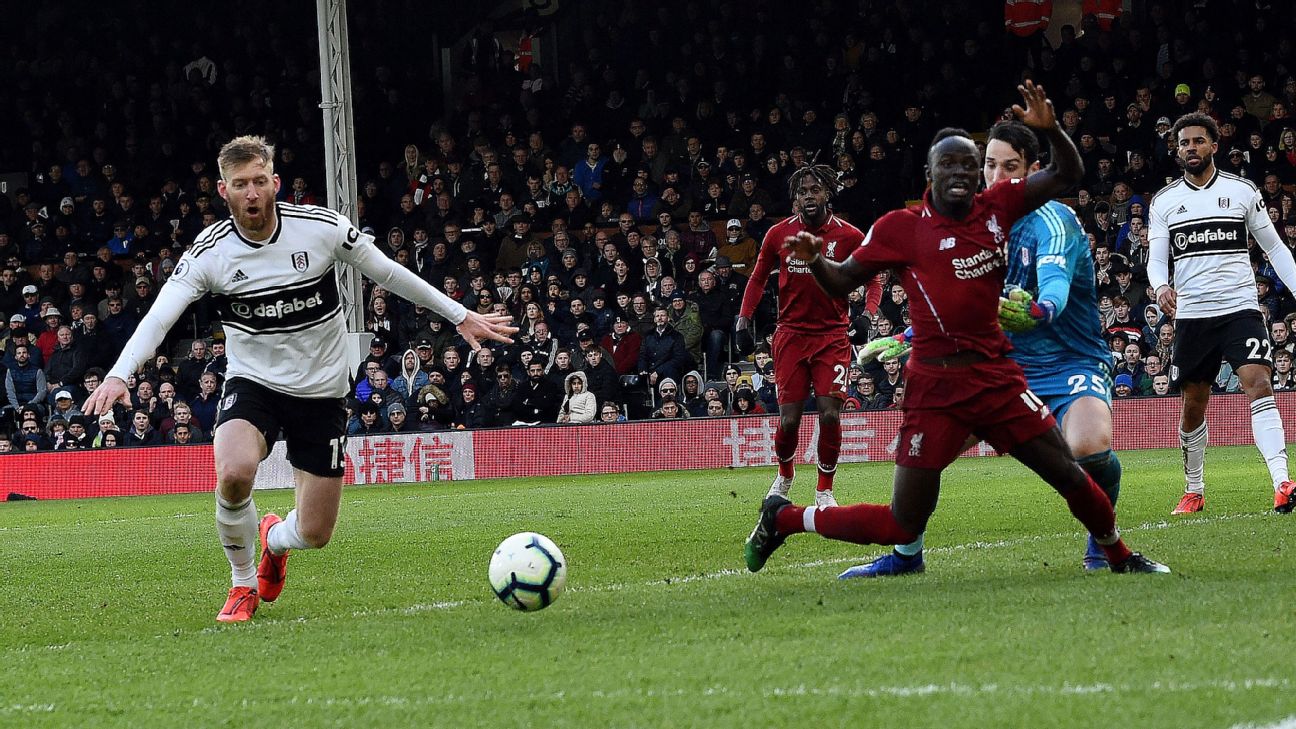 Response of the weekend

It must be a pretty stressful business watching them. They have lain bare their deficiencies and on a number of occasions pulled themselves back from the brink, a season that has been part title challenge, part high-wire act.

Against Fulham, Liverpool were very close to tumbling. Sunday’s match served up a footballing rarity — a Virgil van Dijk error — nearly causing what, under the circumstances and considering the opposition, would have been a calamity and maybe ended their title bid.

– Liverpool Ratings: Mane 8/10, Salah 4/10 as Reds sneak past Fulham
– Cox: Liverpool go top, but title may be beyond them

But then James Milner scored his penalty and Liverpool were back on top of the league.

“I’m pleased with the reaction of my players,” said Jurgen Klopp after the 2-1 win. “After that, we were much clearer again than we’d been before. I didn’t see us panic. I liked how we reacted.”

This is one of those results you can judge either way: A lucky escape, handed a point against a nearly-relegated team by a penalty, or alternatively an example of Liverpool’s indefatigability, their robustness in both a football and a mental sense.

Does it matter which one? At this stage of the season, not really.

Basic unfairness of the weekend

It’s an obvious point to make but still one worth repeating: It remains absolutely absurd that VAR was in place for the FA Cup quarterfinals at some grounds but not others, and thus Sergio Aguero’s offside winner for Manchester City was allowed to stand in their 3-2 victory at Swansea.

There’s an additional layer of absurdity in the policy of only having the system at Premier League grounds, when it’s not in place for actual Premier League games. It’s too late for Swansea but there is little point in having a system designed to increase fairness, when it is not implemented fairly.

Well-timed break of the weekend

The international break has arrived at a good time for Ole Gunnar Solskjaer and Manchester United. The fortnight until their next game will allow Solskjaer to reset and reconsider things after two defeats that could stall their previous positive momentum, and hopefully get most of his players fit again.

But the performance in Man United’s 2-1 FA Cup quarterfinal loss to Wolves, described by Solskjaer himself as the poorest of his tenure so far, should still be concerning.

Before these games, essentially everything that Solskjaer did went right. How he and his team reacts to this will tell arguably us more about his abilities than the last three months.

Performance of the weekend

It’s easy enough to dismiss Wolves as the project of a super-agent using wealthy backers to break into the Premier League. Of course that’s true to a point, but that does a disservice to the management of Nuno Espirito Santo.

Throughout Wolves’ promotion campaign he was devoted to a 3-4-3 system that was clearly a huge success, but its deficiencies in the Premier League were exposed and a run in the autumn that saw just one point collected from six games threatened to derail their season after a good start.

When a way of playing has been so successful previously it must be difficult to alter it, but that’s what Nuno did, dropping a forward and experimenting with a 3-5-2 in December, switching to it full-time in January. Now, they’re seventh in the Premier League and in the FA Cup semifinals.

Introducing Leander Dendoncker to the midfield has allowed Joao Moutinho and Ruben Neves to play with more freedom, but also brought together the strike partnership that beat Manchester United: the two goals on Saturday were the 12th and 13th Raul Jimenez and Diogo Jota have scored in the 11 games since they came together a couple of months ago.

Continuing concern of the weekend

“In my opinion the first 45 minutes were the best we have played all season, then in the second half we stopped playing.”

The most troubling thing about Sunday’s trip to Everton for Chelsea should, of course, be the result, a 2-0 defeat in what was effectively their game in hand, an advantage they have wasted. But not far behind is Maurizio Sarri’s response to it, simply because it’s been heard so many times before.

If there is a running theme in this season under Sarri, it’s him emerging after adverse results and complaining that his team were good for a certain period of time, before dropping off a cliff and handing the initiative to their opponents. Sometimes they have escaped, sometimes they haven’t, but the complaint is always the same.

Sarri has always professed he is not really sure why this keeps happening, but it does keep happening, and surely that’s his biggest problem: If he doesn’t know why it’s happening he doesn’t have much chance of stopping it, and if he can’t stop it then he will have a problem staying in his job for much longer.

Conclusion of the weekend

It’s always sensible to be cautious about applying wider context to FA Cup games, but Watford’s win over Crystal Palace on Saturday perhaps provided more evidence of their status under Javi Gracia.

They can’t realistically hope to be anything other than the best of the rest, but they seem to have that nailed: Saturday was the third time this season they’ve beaten Palace, a club of similar size with similar aims, 2-1, an indication if nothing else that they have got the best of a direct competitor. And with an FA Cup semifinal place thrown in too.

Misfortune of the weekend

This hasn’t been a good season for Millwall, lying one point and two places outside the Championship relegation zone.

The FA Cup run has provided some succour, so with that in mind the nature of their elimination was perhaps even more heart-breaking, goalkeeper David Martin somehow letting a Solly March free kick float into his goal in the 94th minute. From there, it felt inevitable that Brighton would win on penalties.

It’s the sort of goal that makes you question the existence of a kind and benevolent deity: After such a miserable campaign, you would think such an entity would let them have just this one thing, spare them this one indignity. Not so, as it turns out.

Worst player of the weekend

It’s not been a great few months for Marko Arnautovic, after he failed to get the move he wanted to China.

Since then, he’s been out of the West Ham starting XI through a combination of injuries and Manuel Pellegrini’s prudence. Then when he did get his start, in West Ham’s 4-3 comeback win against Huddersfield on Saturday, he was ineffectual, booed when substituted and watched his immediate competition for the centre-forward role, Javier Hernandez, change the game.

It will be astonishing, and probably counter-productive for all concerned, if he’s still at the club next season.