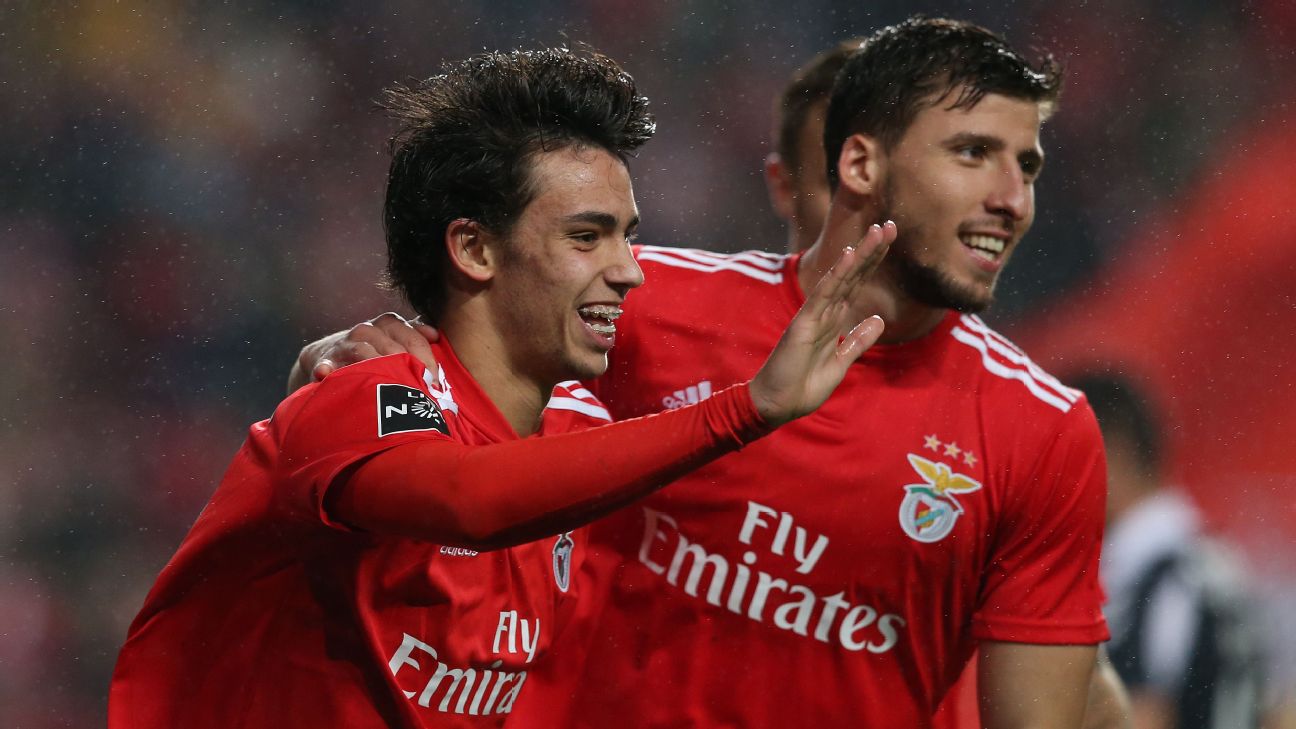 The transfer window for Europe’s biggest clubs is closed, but click here for all the deals, and keep track of who has joined the big boys. Transfer Talk will continue to scour the world’s media and set correspondents loose to see what’s on the agenda for the summer.

Manchester United and Juventus are prepared to pay €180m to acquire the services of Benfica pair Joao Felix and Ruben Dias for next season, according to Record.

The Portuguese sports daily reports that the Premier League giants and the Italian champions are both negotiating the signing of defender Dias and midfielder Felix — dubbed “the new Ronaldo” — with Portuguese agent Jorge Mendes acting as mediator.

Juve and Manchester United are not the only clubs keen to sign the two players with Atletico Madrid also in the race. Atletico consider Dias as an ideal candidate to replace veteran Diego Godin, whose contract with Atletico expires this summer and is expected to join Inter Milan.

A Portugal international, Dias has a €60m release clause. Juve’s interest in Dias dates back to last season. The 21-year-old has played 70 official games for Benfica since making his debut in 2017. Benfica turned down a €35m offer from Lyon last summer for Dias and instead extended the player’s contract until June 2023.

A Portugal under-21 international, Felix has scored 10 goals in 27 official games in his debut season with Benfica. Felix, who has also been likened to Kaka, has a €120m release clause.

The 21-year-old also has five league assists to his name this term.

Brendan Rodgers has barely had time to put a kettle on in his new office at Leicester, but he’s already planning an audacious summer swoop for Bournemouth goal machine Callum Wilson, according to the Sun.

The report states that Wilson could be on his way to Leicester for as much as £40 million should Rodgers get his way. But that could be just the tip of the transfer kitty iceberg, with the paper claiming that Rodgers could be on the receiving end of a £200 million welcome package as he bids to take Leicester back to the pinnacle of English football.

That’s not likely to happen again (is it?), but the former Celtic boss is clearly intent on strengthening his squad when the summer transfer window opens at the end of the season.

Chelsea and West Ham have also been linked with Wilson, who has been hampered by injury since the new year, but a move back to the Midlands could be tempting for a player who will have one eye on securing a place in the England squad after making his debut against the U.S. in November. As Rodgers looks to revamp the Leicester squad, Wilson could find himself a man in demand.

Brazilian full-back Marcelo is set to leave Real Madrid this summer, with Juventus his most likely destination.

The Mirror cites Tuttosport as reporting that Madrid have already identified a replacement for the Brazilian full-back. Marcelo has been a fixture in the Spanish capital for 13 years, but this season looks set to be his last at the Bernabeu.

Youngster Sergio Reguilon has been a regular in his place in the new year, but Los Blancos manager Santiago Solari has set his sights on a long-term replacement. The lucky man, apparently, is Ajax’s Argentinian full-back Nicolas Tagliafico, with his agent claiming that Madrid have stuck his name on a list titled “wanted.”

“Real Madrid have Tagliafico’s name on their list because Marcelo is off to Juventus,” agent Ricardo Schlieper is quoted as saying.

— Manchester United are smitten by the aptly named Zito Luvumbo, according to the Sun, which claims that the Red Devils are awaiting the Angolan youth prodigy’s arrival for a trial, which could see him sign on the dotted line at Old Trafford before being shipped out on loan to gain experience — with Portugal the most likely destination.

— The agent of Andreas Samaris has done little to pour cold water on reports linking the Greek ace with a move to Newcastle. The Newcastle Chronicle cites Portuguese outlet A Bola as reporting quotes from Yannis Emmanouilidis that Samaris is still to discuss a contract renewal from Benfica and that the Portuguese giants have made no move to renew the player’s current deal, which will be music to Newcastle’s ears.