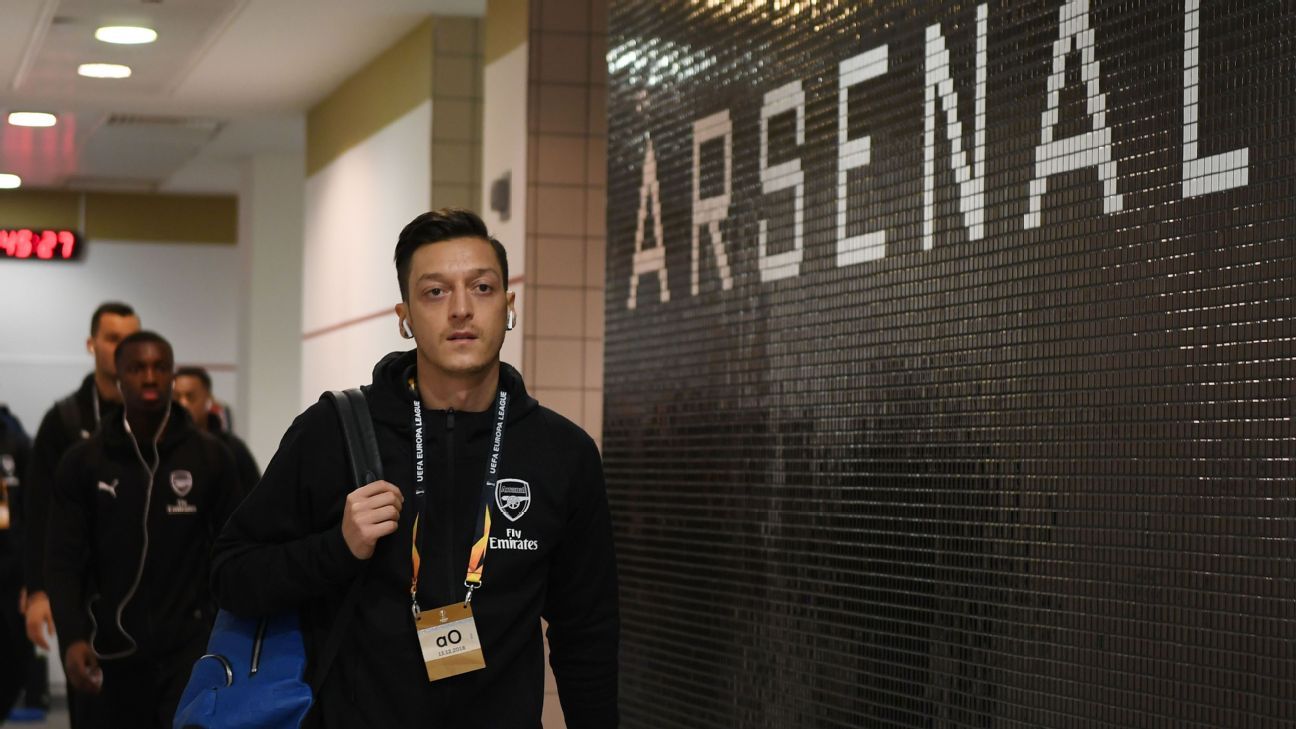 TOP STORY: Emery wants Ozil out to free up funds

Arsenal manager Unai Emery is ready to let Mesut Ozil leave the club in an attempt to bring in money for other signings, according to the Daily Mail.

The German was left out of the Arsenal squad this weekend as they lost 1-0 to West Ham at the London Stadium, and has been left out of matchday squads on a number of occasions this season.

Ozil’s £350,000 per week wages are one of the reasons they will want rid of him, as they look to free up space on the wage bill, but this will also deter potential buyers.

Emery will use the money to try to bring in players already identified by himself and Arsenal’s recruitment team.

10.34 GMT: Nabil Fekir, who was close to joining Liverpool last summer, will extend his Lyon contract but could still leave next summer, the French club’s president has told L’Equipe.

Jean-Michel Aulas explained he had met the FIFA World Cup winner shortly before the Christmas break to “confirm he wishes to extend his contract, with two options: either he leaves at the end of the season or he commits himself long term.”

The France international has been linked to Arsenal in the past and, more recently, to Real Madrid.

American-born Rossi is searching for a new club after leaving Genoa and is training with United after being invited to Carrington by former United teammate Solskjaer. The 31-year-old was watched by Ferguson on Saturday during United’s final preparation to face Spurs and Solskjaer believes the former Italy international will have plenty of offers.

“We’re not gonna sign Giuseppe, I think, but he’s trained well with us,” said Solskjaer. “He has looked sharp. He’s looking for a club so he’s probably going to stay for another week with us unless someone takes him. He scored a fantastic goal in training and the gaffer turns around and says ‘What about that son!’ It’s helping him to get fit for his next move so if there are any takers it should be quick.”

10.09 GMT: Would anyone like a 33-year-old, slightly used, attacking midfielder on a free transfer? Yohan Cabaye has been released by Al Nasr.

10.04 GMT: Juventus’ Paulo Dybala is one of the top young players around and he hasn’t ruled out a move to Ligue 1 in the future (though he might just have been buttering up the French TV station who was asking him directly about the prospect of him moving there…)

He told Canal+: “Why not Ligue 1 at some point in my future? I never say never. However, right now, it is not part of my plans.”

09.50 GMT: Michy Batshuayi is close to completing a move to Monaco from Chelsea but while sources have told ESPN FC not to expect an announcement today, the deal is progressing and should be completed in the coming days.

09.22 GMT: Lionel Messi has always said he wants to finish his career back in Argentina with his former club Newell’s Old Boys but the team seem to be preparing for his arrival already by signing his cousin Emanuel Biancucchi from Peruvian side Melgar. Don’t worry, Barcelona fans, he’s not going anywhere yet.

09.11 GMT: Santos president Jose Carlos Peres has revealed that his club has sent a formal request to Real Madrid asking them to allow the Brazilian wunderkind Rodrygo to remain with the South American outfit until December and for the player not to leave this summer.

The 18-year-old signed for Madrid last summer in a €45m transfer and is supposed to link up with the European champions in July.

“We have already asked Real Madrid, we are waiting to see what their thoughts are,” said Santos president Jose Carlos Peres as reported in Lance newspaper when asked about the possibility for Rodrygo to remain until December.

Rodrigo, who travelled to Spain during the winter break to see Madrid’s facilities and meet the squad, is currently on duty with Brazil’s U-20 side and will miss Santos’ preseason.

08.54 GMT: Could be a blow for Manchester United’s defence — though they seem to be going OK under their new boss now — as Inter Milan coach Luciano Spalletti has ruled out selling reported United target Milan Skriniar this winter, saying to Sky Italia: “Nobody’s got enough money to pay for Skriniar, he’s staying here — he’s a player who is out of reach for everybody.”

08.36 GMT: Paris Saint-Germain are stepping up their efforts to sign Idrissa Gueye from Everton, L’Equipe reports.

PSG boss Thomas Tuchel talked to the midfielder last Wednesday, the paper claims, to discuss where he would fit into the French champions’ side. The Senegal international who was bought by Everton from Aston Villa for €8.5m in 2016, is likely to cost PSG around €30m, the equivalent of their entire winter transfer window budget.

07.55 GMT: Manchester City Guardiola has ruled out making any new signings in the January transfer window but says a new holding midfielder will be a priority for the start of next season, and addressed reports linking his club with a move for Wolves star Ruben Neves.

“Fernandinho‘s role, it’s so difficult to find [a similar player],” Guardiola said. “He knows the Premier League, after three years together here, he knows everything and that’s so important. But, of course, for the next season it’s an important target to find. He’ll be 34 and he cannot play every few days.

“A month ago, I started reading ‘Ruben Neves, £100m.’ That is not going to happen, we are not going to pay £100m for a holding midfielder. Of course, all departments in the club, we have in every position four or five or six options — depending on age, what we believe and, of course, the price.

English striker Callum Wilson has attracted interest from across the Premier League thanks to his excellent performances this season, and his club have put a price tag on him according to the Star.

It will take a bid of £70 million for one of his many suitors to get a deal done, with Chelsea one of the sides regularly linked with the 26-year-old.

The striker has nine goals and five assists in the league this season as part of an Bournemouth side who play some nice football, even if they haven’t had the results lately.

The report also says that Dominic Solanke was signed from Liverpool as a replacement for Wilson in preparation for his exit this year.

Sky Italia believe that the man singled out to solve Chelsea’s striker problems, Gonzalo Higuain, has handed in a transfer request.

The experienced Argentine is currently on loan at AC Milan from Juventus, but has told the club he wants to join Maurizio Sarri’s side.

The Express add further weight to the rumours, reporting that Chelsea are already in talks with the Italian champions with a view to an 18 month loan deal. They have had an offer for a six month loan rejected already.

It appears Chelsea are eager to get their man in January, as Alvaro Morata and Olivier Giroud do not fit Sarri’s plans.

Idrissa Gueye could be set for a return to Ligue 1 according to reports in France, with Le 10 Sport indicating that Paris Saint-Germain are interested.

The 29-year-old is in his fourth season in the Premier League, and with Everton currently underachieving a move to the French capital could be tempting, and the money on offer even more so.

Speaking of money, the rumoured fee is around £45m, which might interest Marcel Brands, the new director of football at Goodison Park, who would like to make his mark on the club along with manager Marco Silva.

The Barcelona midfielder will finalise a deal with the Premier League club next week. That’s according to Mundo Deportivo, who believe the fee will be around £18m.

With rumours of Marko Arnautovic‘s move to China still doing the rounds, the Daily Mail are reporting that the Hammers will look to replace him with Bournemouth’s Wilson.

French outlet L’Equipe believe Chelsea are interested in the Paris Saint-Germain midfielder, and have made an enquiry about the player whose contract runs out in the summer.

Reports from Tuttomercato in Italy state that Napoli midfielder Allan is a target for Pep Guardiola’s side but the fee could be as high as £100m, but City will want to negotiate a lower price.

Tottenham have joined the long line of clubs interested in Ajax’s Dutch midfielder Frenkie de Jong and will step up their interest if Christian Eriksen leaves for La Liga. Fees in the region of £75m have been touted.