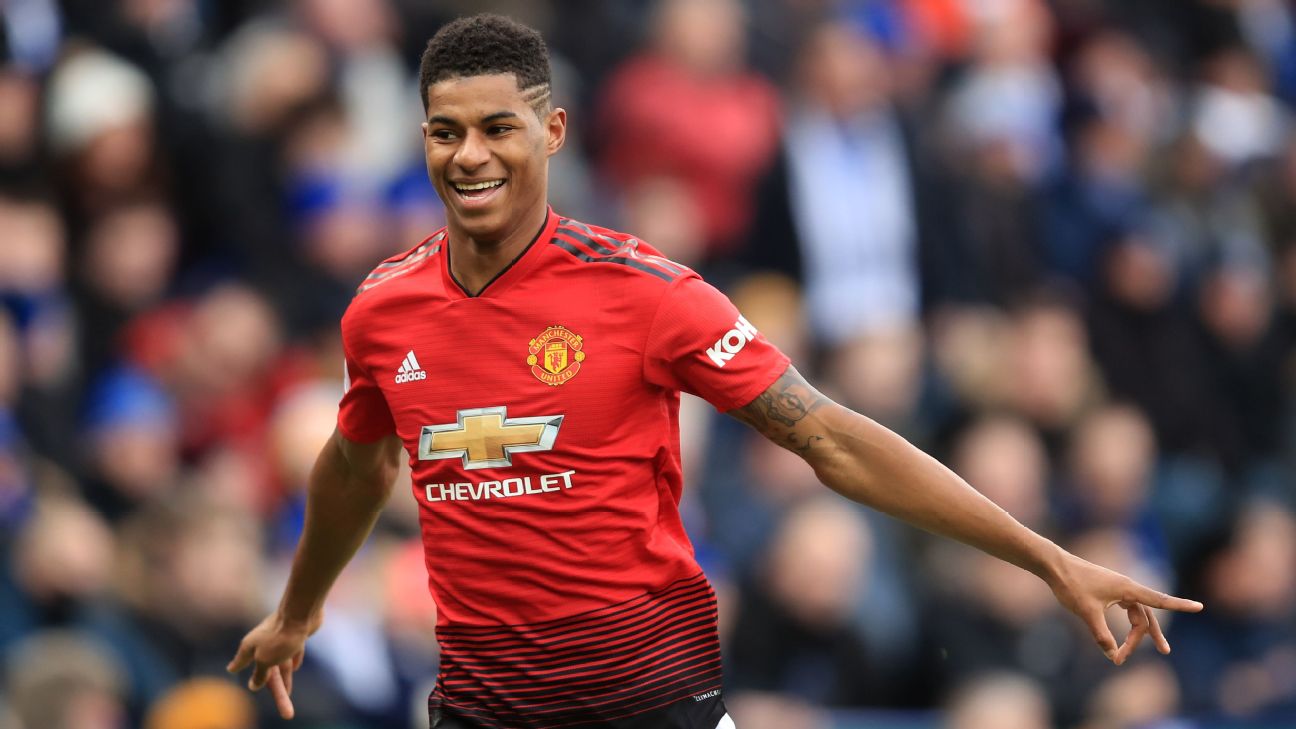 Barcelona have been looking for a long-term replacement for the 32-year-old Luis Suarez and are turning their attentions to Manchester United and Marcus Rashford, according to Mundo Deportivo.

Eintracht Frankfurt striker Luka Jovic, 21, is on the club’s shortlist, while sources have told ESPN that France star Antoine Griezmann is not — despite his desire to quit Atletico Madrid this summer and €100m release clause. But Rashford, whose contract expires in 2020, is now “on the agenda” with Barcelona reported to be keen to add the 21-year-old to their ranks this summer as part of an overhaul that could see Philippe Coutinho depart.

Sources have told ESPN that Barcelona are realistic about their chances of landing the Manchester United forward and are waiting to see if he ends up committing to an extension. United’s stance is that there is no chance they will sell the England international and they’re already talking about a new contract, but Barca feel Rashford has everything they’re looking for in a striker.

12.11 GMT: Chelsea’s Andreas Christensen has revealed to the Times that players won’t be allowed to leave this summer if the club’s transfer ban is upheld.

Christensen is one player who will certainly be wanting to make a move, given he’s barely played, while the Daily Star have a nice long list of players — including Alvaro Morata, Kurt Zouma and Tomas Kalas — who could be sold for £220m. All very well, except for the fact they might be needed in the first-team next season if no reinforcements are allowed to arrive.

11.33 GMT: Reported Arsenal and Manchester City target Thomas Partey is excited by the idea of playing in the Premier League, a source close to the Atletico Madrid midfielder has told ESPN FC.

Reports in Spain have linked both Arsenal and City with a move for the midfielder — with the source confirming a number of clubs in the Premier League and elsewhere have shown a willingness to meet his €50m buy-out clause.

The source added that Atletico boss Diego Simeone is keen for Thomas to stay at the Wanda Metropolitano, and the player appreciates this support. But, at this point, he is considering all his options.

11.03 GMT: Atletico Madrid are keen on Roma defender Kostas Manolas, say Mundo Deportivo, but Manchester United are also interested given that his release clause is a low €36m.

“Taking an intermediate step in Dutch football or Portuguese football, that has been traditional for Latino players,” he said. “I think Hirving has had an influential time in Holland and shown he can be a player who is incredibly valuable and can make the jump to the biggest clubs in Europe. It’s clear, I think from the analysis side of the player, he’s absolutely ready.”

10.04 GMT: El Chiringuito report that Barcelona are interested in Quincy Promes. The Dutch winger only moved to Sevilla in August from Spartak Moscow and signed a five-year contract.

Barcelona are evidently keen to reinforce their attack with a versatile forward player, but his release clause of €150m may prove prohibitive.

09.34 GMT: The agent of Valencia defender Mouctar Diakhaby says his client would consider a move to Napoli should a serious offer arrive this summer.

The 22-year-old centre-back joined Valencia last year from Lyon and is tied to the Spanish outfit until Jun 2023.

“I would love for Diakhaby to play at Napoli,” Diakhaby’s agent Jacques Crouzel told Calcionapoli24.it. “If a serious offer arrives, the footballer and I would be thrilled to go to Italy. He loves Italy and Italian football but we haven’t spoken to Napoli or any other club. When he arrived at Valencia, he was going to be third choice in his position but he has become a regular starter. Valencia paid close to €20m to Lyon for the player and will only sell him for a higher figure.”

09.12 GMT: Barcelona have been watching Everton forward Richarlison as they continue to work on an bolstering their attacking options this summer, sources have told ESPN FC.

Brazil international Richarlison, 21, has scored 12 Premier League goals since making his £40m move to Goodison Park last summer. That form has put him on Barcelona’s radar as the Spanish giants search for a long-term replacement for the 32-year-old Luis Suarez.

08.30 GMT: Nico Schulz, Germany’s hero in their thrilling 3-2 win over Netherlands on Sunday, has described Inter Milan as “the team of my dreams.”

Hoffenheim defender Schulz, 25, made a name for himself with his late strike in Amsterdam on Sunday, and has admitted he has his sights set on joining one of Europe’s top clubs.

He told Sky Deutschland: “Certainly one day I’d like to play in a top European club and there are some clubs who mean a lot because they’re in the Champions League every year and the team of my dreams has always been Inter. But right now I’m happy at Hoffenheim — we’ve got a great team and I’m happy here.”

Eden Hazard has been linked with Real Madrid for years, but it seems that the Spanish club’s transfer gurus have a different player top of their wishlist: Liverpool winger Sadio Mane.

Marca reports that “Mane is Zinedine Zidane‘s primary target to reinforce Real Madrid’s attack this summer” and that “the forward’s simple and direct game is what he seeks for his new Real Madrid team.”

Not sure if “simple and direct” is a backhanded compliment, but it certainly seems like ZZ is a fan and that means bad news for Liverpool. Still, having sold Philippe Coutinho to Barcelona for €150m recently, they can cash in for a similar amount and use the money to rebuild. Or just hang onto the Senegal international given he only signed a new five-year contract in November…

What this means for Hazard’s future is unclear. He won’t want to hang around at Chelsea if they don’t make the Champions League, and won’t take too kindly to being a backup option for Real either.

Mbappe the Real deal? Don’t bet on it

Whispers have been swirling across the Spanish border from France in recent days, with Real Madrid insisting that they have no intention of spending outlandish sums to bring Kylian Mbappe from the French capital to its Spanish equivalent.

France Football had suggested that  Zidane was ready to spend as much as €280m on the French wonderkid. But Marca report that Madrid have no intention of lavishing a world record sum on him.

The paper claim that the newly installed Zidane has been in discussion with the club’s president Florentino Perez over bringing new faces to the Bernabeu — but that Mbappe’s name has barely featured. See above for those who have.

Herrera and Thuram to Arsenal?

Ander Herrera told El Periodico yesterday that talk of a move to Paris Saint-Germain was “logical,” but there’s also been speculation from the Daily Mail that he could join Arsenal on a free transfer.

The Spaniard’s contract at Old Trafford is up in the summer and, with just three months to go on his contract, it is hardly surprising that some of Europe’s top clubs are eyeing him up. It would be something of surprise for him to move to the Gunners though, given they are direct rivals of United.

Arsenal are also chasing Guingamp striker Marcus Thuram, according to the Sun. If you recognise the name, it’s because 21-year-old Marcus is the son of 1998 World Cup winning France defender Lillian Thuram.

Thuram Jr. is another whose contract is running down this summer and Unai Emery doesn’t have a lot of money to spend, so is looking at cheaper options. Borussia Dortmund might have something to say about their interest though.

– N’Golo Kante is going nowhere — even if Real Madrid do come knocking this summer. Currently away with World Cup winners France, the midfield dynamo has insisted that he has no plans to leave Stamford Bridge, despite a steady stream of rumours suggesting otherwise.

The Evening Standard report comments from Kante while away with Les Bleus, with the midfielder saying that he still had aims with Chelsea. Refreshing given that he signed a new five year deal with the club in November worth an apparent £290,000 a week.

– Could Joe Aribo turn his back on a big money move to the Premier League, in favour of staying at little old Charlton? Well, Football.London report that the League One side are still frantically attempting to persuade him to put pen to paper at The Valley — and haven’t given up hope of him committing his future to Lee Bowyer’s promotion chasers. Arsenal have led the chase for the midfielder, who has scored six goals in 26 matches for the Addicks so far this season.