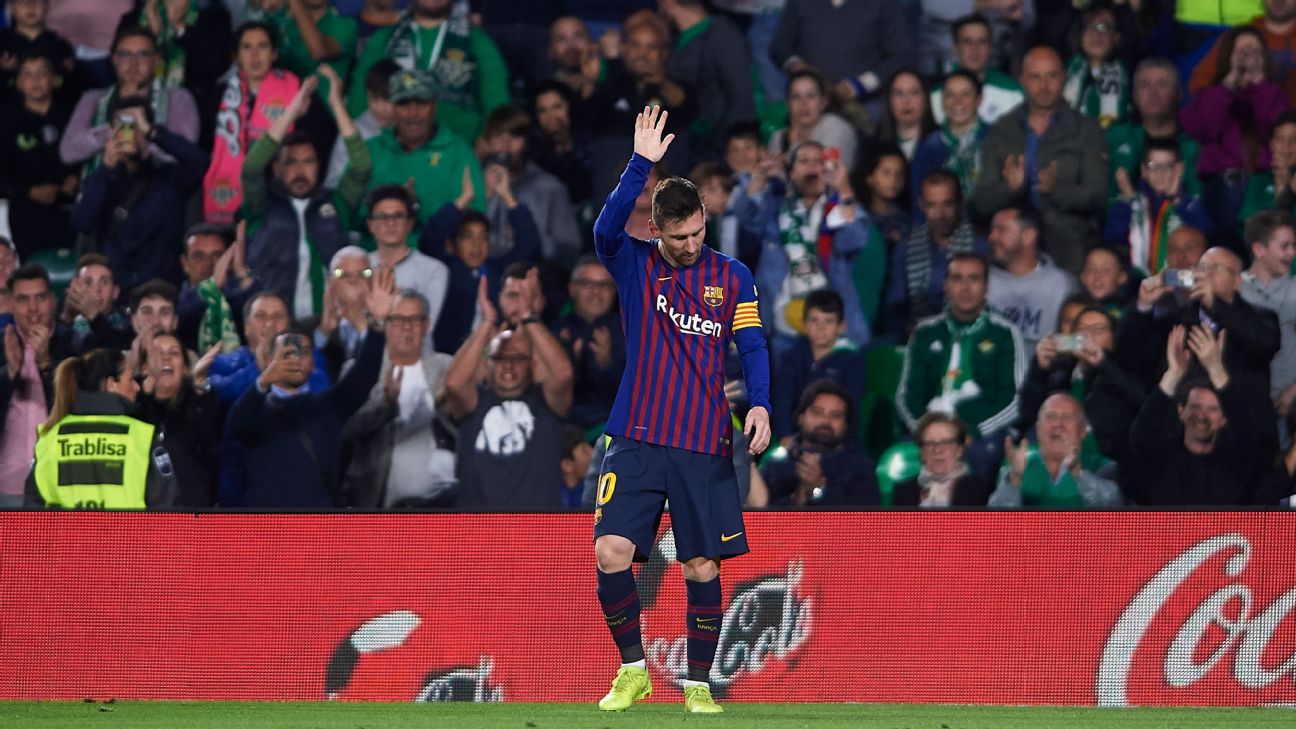 Here are three sentences whose words do no justice to the majesty of their content: In the depths of a molecular cloud, a star is born. Neil Armstrong walked on the moon. Lionel Messi chipped Pau Lopez in Barcelona’s 4-1 win at Real Betis on Sunday.

All three of the above sentences represent events that are noteworthy on an intergalactic scale. They all mark moments where aliens, sitting peacefully in their suburban homes, looked up to the skies from their Sunday papers and said: “Things done changed.”

Though I am not in possession of a telescope of sufficient strength, I comfortably assert that wherever the football gods were when watching Messi score his third goal last night against Real Betis, they each fell off their chairs. Those same football gods will forever tease that friend of theirs who, with the game won in the 85th minute, popped out briefly and missed seeing that in real time.

Messi is interstellar. That chip against Betis, one of three goals he scored on Sunday, is already travelling out to the edges of our known universe, shared feverishly in WhatsApp groups by different members of a crew as their ships travel at warp speed. Somewhere out there, on distant windswept worlds whose inhabitants have settled in to watch their favourite evening soap operas, a small broadcast about Messi’s chip has just begun. “I am sorry,” says the broadcaster, their voice suddenly so small and unusually hesitant. “In an interruption to scheduled programming…”

Messi chipped Pau Lopez and we need to talk about what that means.

Messi chipped Pau Lopez because that is the last thing that the goalkeeper was expecting. Lopez, whom Messi had already beaten twice in that match, was probably anticipating that the forward, as he arrived in the area to strike the ball, would lash a shot low towards either corner of the net. We know this because, as we carefully review footage of the crime scene, Lopez steps forward, off his line, perhaps preparing to dive to his knees.

Lopez, a diligent professional, puts his weight and his momentum on his toes, and perhaps — the second before Messi strikes that ball — he entertains the thought, at some profoundly subconscious level, that Messi might just consider putting the ball over him. If so, it is a thought that he immediately dismisses in irritation. Dear God, Pau, he thinks, don’t be ridiculous. You utter fool.

That said, we must not feel sorry for Pau Lopez. He’s a well-paid professional, presumably rewarded in handsome fashion for the services that he provides to Real Betis, but it’s easy to sense a faint element of sympathy for him.

When a goalkeeper watches a chip float over his head, he does so with a sense of hopelessness. In that moment, as Messi collected that pass and sent that chip soaring airborne, Lopez knew it was going in. He was a hapless witness to his own magnificent end.

Of course, when Messi did that to him, he did something few footballers can do. If most other footballers attempt that shot, the goalkeeper ends up simply ends up catching it; either that, or the ball drifts harmlessly over the bar. But Messi is obviously nothing like most, if any, of his peers. The chip requires mastery of three specific techniques — spin, precision and disguise — and Messi simultaneously summoned them all.

If you watch that goal again, which of course you should, you will see at the instant of impact Messi had his head bowed, with no indication as to what he would do next. He had cleared the ball for flight, an air traffic controller plotting its path through the heavens. He then applied the spin — my God, the spin! — slicing his foot beneath the ball at such speed that the motion must have cut the surrounding grass. And of course the ball, with the glorious inevitability of our slowly dying sun, rose and fell.

Across the Universe, all sentient creatures knew what they had seen. The supervillain Thanos, now resting in his garden at the edge of creation, glanced mournfully upwards and lamented: “Dread him… Run from him… Messi still arrives.” The home crowd at Betis, though opposed to Messi, made a gesture of the most moving beauty: they rose to their feet in applause, chanting his name. It’s never an easy thing to do when it’s your beloved team on the receiving end, but they had to acknowledge the majesty they’d witnessed with their own eyes.

They did it because Messi transcends.

If you didn’t see the superb reaction by the @RealBetis_en fans to #Messi shredding their team with his hat trick tonight then, courtesy of @DiarioOle here it is pic.twitter.com/G3lVupEZ7B

“To transcend” — a verb defined by the Merriam-Webster Dictionary as “to rise above, or go beyond the limits of.” During that passage of play, Messi transcended football.

He was truly a thing to witness.

Of course, when he’s off the field, Messi is utterly human: just ask the taxman. On the field, though, he is frequently supernatural and, against Betis, he was something even more. The Merriam-Webster Dictionary helpfully provides another definition of “transcend” — to be prior to, beyond, and above (the universe or material existence)” — and we can think, yes, yes, that is it. Messi’s goal against Betis was above and beyond the Universe: it was interstellar.

Against Betis, Messi did not merely chip Lopez; he did not merely walk on the moon. As he stood there, as we all admired the ball’s elegant arc, the makers of our night sky commissioned a new star in celebration.